South Ossetia at the crossroads 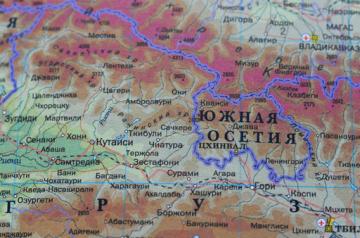 Moscow's recognition of South Ossetia and Abkhazia in August 2008 was an important political step towards a brand new status of the Russian Federation in post-Soviet societies. Over the past two years this step has been thoroughly analyzed by various think tanks dealing with the future of the Caucasus. So, what do we have in South Ossetia?

No doubt, the republic has undergone dramatic changes since the autumn of 2008-first of all, in terms of security, to be more exact-quality of security services. The citizens of Tskhinval no longer have to hide to escape shells fired from the Georgian villages (and this is what had been taking place at least 1-2 times a week long before the Georgian invasion two years ago). However, a threat of a new attack remains: some observers think it might be a series of provocations which yet can be ignored (by the official Moscow as well) if take place simultaneously with other attacks in Southern Caucasus and the Middle East.

Russia remains the young republic's protector- in war and in politics, and South Ossetia expects overwhelming assistance from Moscow, not only financial. The republic needs a distinct ideology. Meanwhile, South Ossetia`s achievements in its most promising spheres: agriculture, production of building materials and some minerals, tourism- leave much to be desired. The leader of the Yedinstvo (Unity) party, Z. Kokoyev, said: “...We have practically no livestock industry, no fruit and vegetable growing...we lack water...All vital products, even fruit and vegetables, are being imported from Russia...”

There is a growing divide in the society as Russian specialists invited to work in South Ossetia earn a few times more than the locals (those who are lucky to be employed). Prices in market places in Moscow and Tskhinval are almost equal! Despite the fact that some roads were repaired (for example, the one from Tskhinval to Dmenis), communication between the districts of the republic (with the Leningorsk area 100 km outside Tskhinval and 30 km from Tbilisi) is still poor. In view of this, the republic fails to become a truly independent state having all its territories under control. Religion is another thorny issue there as the Moscow Patriarchate of the Russian Orthodox Church refuses to recognize the eparchy to which South Ossetia belongs.

All debates which are currently going on in the republic focus on future. Those who urge for reunion with North Ossetia are quite right when they say that the continuing instability evokes pessimistic sentiments in people, who sooner or later decide to leave the republic. Those who have an alternative point of view say that since accession to Russia is not a task of the next few months, it is necessary to work hard to develop statehood on its own. The government, led by Vladimir Brovtsev of the Chelyabinsk region, is criticized for some of its policies, and since the media covers only negative moments, there is an impression that the situation is only worsening. As a result, more and more people are becoming critical-though unintentionally-of Russia.

However, despite all hardships of everyday life in South Ossetia, there is not a sign of pro-Georgian sentiments. The memories of the 20-year confrontation and economic blockade are too fresh in their minds. 1 Still, hypothetically, local experts do not rule out a possibility that Moscow might change its policies in South Ossetia amid criticism. At the same time, Tskhinval officials understand that becoming a part of Russia would be unreal not only due to certain geopolitical reasons but also because of some regional peculiarities: relations between North and South Ossetia remain quite complicated.

New difficulties in the independent South Ossetia give the West the green light to change the existing situation. A well-known intelligence expert, Paul Goble, said that very soon South Ossetia will be offered an absolutely different scenario, which will in no way meet the interests of Russia in the North Caucasus. To avoid this, Moscow needs to adopt a very thorough ‘second step’ strategy to prove that the events of 2008 were not the result of unexpected changes but a well-conceived policy.

1 Actually, life in Georgia (except outwardly prosperous Tbilisi and some other strategically important districts with developed infrastructure) is far from stable.