Speech of First Deputy Minister of Foreign Affairs of Russia A.I. Denisov at the ceremony of signing of Co-operation Agreement between MFA of Russia and Union of Oil and Gas Producers of Russia, Moscow, 21 May 2012 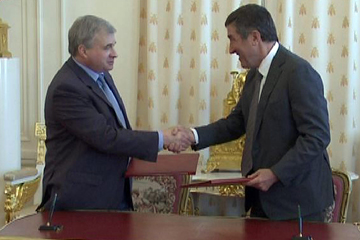 A while ago, as you have seen, the ceremony of signing of Co-operation Agreement between the Union of Oil and Gas Producers of Russia and the Ministry of Foreign Affairs of Russia has taken place.

Today there has been an inaugural session of the Government of the Russian Federation of new composition, in which S. V. Lavrov retained his post as the Minister of Foreign Affairs. He has always paid and continues to pay close attention to the issues of economic diplomacy and its most important line, i.e. energy diplomacy and policy.

Over the past years, this line has really become one of the most promising and important lines of the foreign policy and foreign economic activity. The volume of international energy exchanges is increasing; their sphere is extending, the efforts of multilateral organizations in this sector are being intensified.

For instance, recently the Gas Exporting Countries Forum has been created. The co-operation within existing international energy organizations is gaining new dynamics, Russia’s profile is rising. The day after tomorrow in Paris together with ROSATOM management, we are to sign Agreement on Russia’s accession to the Nuclear Energy Agency, the body operating within the Organization for Economic Cooperation and Development.

Of course, in such conditions information flows are increasing, the requirements for analytic work in the energy dimension are growing. All this demands close interaction of the Ministry of Foreign Affairs, diplomatic service in Moscow and our embassies abroad with the state and private gas, oil and electric companies as well as (which is very important) with industry associations, showing certain interest not only in separate companies but also in the energy sector of economy as a whole.

We always considered Union of Oil and Gas Producers the leading organization in this regard and we appreciate the format and scope of co-operation, established between it and the Ministry of Foreign Affairs. The agreement between the Union and MFA existed until the present moment and was valid for more than 10 years. Over this period, the situation has changed in the whole world. Moreover, at the world energy markets it changes each day and we hardly manage to follow the trends. Thus, the necessity to renew our contractual relations appeared.

Dear colleagues, let me express satisfaction to Yuri Konstantinovich on behalf of the Ministry of Foreign Affairs with new Co-operation Agreement, signed today. We are sure that our interaction will develop further. We will, as it is common to call it in the world diplomatic practice now, develop strategic partnership.