Stability of disagreements: Biden’s election may usher in a period of volatility in US-India relations 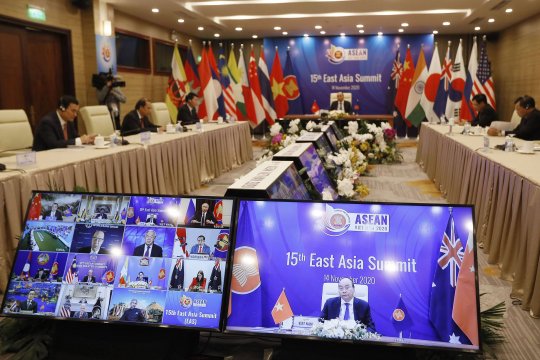 Fifteen countries across the Asia-Pacific region recently inked an agreement on the Comprehensive Regional Economic Partnership (RCEP), which is seen as the largest regional free trade accord signed to date. The signatories are Australia, China, New Zealand, South Korea, Japan and the ten members of the Association of Southeast Asian Nations (ASEAN). The United States and India – the region’s two largest countries – are notably absent from this list though. How could the Indo-American approach to the consolidation of the Asia-Pacific region change as we move on?

The RCEP deal appears to be a serious success for Beijing, promising good strategic prospects in the future. Amid its trade and technological standoff with the United States, China managed to win over to its side 14 leading Asia-Pacific countries that comprise upwards of 2.2 billion people and account for over 30 percent of the global economic output. According to the German-language business newspaper Handelsblatt, the deal "allows China to appear as a flagship of globalization and multilateral cooperation. China thus finds itself in a better position to call most of the shots in regional trade." [i]

The RCEP agreement may have even a greater significance for China, whose leadership initially promoted this accord as an alternative to Washington’s Trans-Pacific Partnership (TPP) project - a comprehensive trade agreement that the Obama administration spent so many years to prepare. Officially, it was meant to comprise almost all the leading countries of the Asia-Pacific region with the exception of China, while unofficially – to keep in check China’s growing influence, at least financial and economic. Now, according to many US experts, Japan and South Korea can benefit the most from RCEP by 2030. Beijing is thus setting the stage for strengthening mutually beneficial ties with two potential participants in America’s main regional military-strategic anti-Chinese project, known as the Quad ("Quadrangle") or the Asian Entente.

At the same time, the absence of two key Quad members (US and India) from the list of RCEP participants may intensify even more the competition between various projects of strategic consolidation in Asia and the Pacific. As we know, Trump withdrew from the TPP talks just days after moving into the White House justifying his decision by the agreement’s potentially "irreparable" damage to America’s productive sector. Shortly after that, relations between Washington and Beijing began to sour. In 2018, the White House essentially declared a full-scale trade war on China, to which a financial standoff and a cold war in technology were added in 2019.

When it comes to relations with India, the new Republican administration, despite its almost demonstrative desire to distance itself from the political legacy of its predecessor, generally stayed the course charted by Barack Obama. In its foreign policy Washington prioritized an expansion of strategic ties with New Delhi, which it regarded as an ally against China’s growing role in the Asia-Pacific region. India thus acquired a "key role" in the US administration's strategy in South Asia and during the Trump presidency the Asia-Pacific region began to be referred to by US officialdom and political experts as “the Indo-Pacific.”

In comments to Foreign Affairs journal, former national security advisor to the Indian Prime Minister Shivshankar Menon notes that during Donald Trump’s four-year stint in the White House India-US relations have only strengthened with a quantitative and qualitative expansion of ties between the two countries’ military and intelligence officers and a flurry of security agreements signed. By the close of 2019, the United States had become India's largest trading partner, ahead of China. Prime Minister Narendra Modi's September 2019 visit to the United States was a big success, just as Donald Trump’s visit to India in February 2010. According to a 2020 Pew Research Center poll, 56 percent of Indians have confidence in President Trump’s foreign policy, compared to just 29 percent globally.

At the same time, determined as he was to build up ties with India on strategic issues, Trump regularly dealt painful blows to that country’s economic interests. His policy of bringing US investments and industries “back home” led to a significant drop in US investors’ interest in Indian projects. In June 2019, Trump essentially declared a trade war on India, stripping New Delhi of trade privileges that would allow duty-free delivery of $5.6 billion worth of Indian goods to US markets. In the summer of 2020, the White House introduced visa restrictions for highly qualified Indian professionals.

The new aggravation of Washington’s policy vis-à-vis Iran came as a serious blow to India, which had to abandon its planned participation in the project for the development of the port of Chabahar, as well as the construction of a railway to Afghanistan – two key elements of the "strategic containment" of Pakistan and China in the western direction. Bending under US pressure, India was forced to look for an alternative to Iranian oil, and also lost some of its export revenues. Meanwhile, Tehran began to gravitate towards Beijing and Washington’s demands for India to scale down its military-technical cooperation with Russia were only adding to differences between India and the US.

During the campaign, Joe Biden was sending out conflicting messages to New Delhi. On the one hand, he, as well as the Indian-born vice presidential candidate Kamala Harris, have been very harsh critics of India's domestic policy, above all the elimination of Kashmir’s autonomous status, the establishment in the state of Assam of the National Register of Citizens, which resulted in 2 million local inhabitants, mainly Muslims, losing their citizenship, and a new version of the country’s citizenship law, which critics saw as open discrimination against Muslims and an attempt to undermine India’s status as a secular state. On the other hand, Biden called India a "natural partner" of the United States and promised that, if elected, he would make an expansion of bilateral ties one of his top foreign policy priorities.

Also, during his years in the US Senate, Biden played a prominent role in expanding US-India ties, including in the field of military-technical cooperation, which is extremely important for India, given its “natural” and “historical” confrontation with China – a problem, which features front and center in New Delhi’s foreign policy today. In view of the military and economic superiority of the Celestial Empire, a "counterbalance strategy" and the maximum possible rapprochement with the United States is a natural choice for New Delhi to go for.

Meanwhile, the very same Quad format is now gravitating towards solving problems of naval deterrence, which is much more in line with US, rather than Indian interests. Even though, according to The Economist, New Delhi is now prepared to consider even "some kind of military alliance" with other Quad members, the almost 3,500 km land border with China remains India’s main concern, as well as the need to contain its historical rival – Pakistan. Indian political analysts have strong doubts about Washington being ready to "fight China for the interests of India." What they don’t doubt, however, is the need to develop the friendliest possible relations with the world’s “only superpower.”

From the standpoint of expanding economic ties between the United States and India, the situation looks even more complicated. India’s sluggish socio-economic development is the main obstacle on the way of strengthening the country's position in Asia and elsewhere in the world. For example, India’s main formal reason for withdrawing from RCEP after seven years of negotiations, was pragmatic fears that the final agreement "would be overshadowed by China's dominance," which would de facto mean the conclusion of a free trade zone agreement with China – something Indian industry is unprepared for now.” [ii]

India’s economy has been hit very hard by continuing COVID-19 crisis, which has already sent the country’s GDP down by almost a quarter since January. In such circumstances, Trump’s policy of economic nationalism is seen by some US experts as shortsighted, devoid of strategic vision and detrimental to America’s long-term interests. Just as Foreign Affairs noted in January, US officials and politicians need to realize that pressuring allies to equalize the rules of trade can’t overshadow the overarching goal of confronting China. And to this end, Washington must assist the economic development of countries such as India.

That being said, however, the rise in Trump's popularity showed that the ideas of protecting the national economy very much resonate with the American public. Therefore, a realization of the need to simultaneously take into account the interests of the new economic sectors, so vital for the globalization process to go forward, and also of the tens of millions of voters, whose incomes are tied to traditional industries, objectively limits the freedom of economic maneuver for any future US administration. All the more so since the Indian authorities are embracing, just like Trump, the ideas of economic pragmatism by openly encouraging national production and limiting foreign competition.

And last, but certainly not least, New Delhi is wary of the fact that during his stint as Barack Obama’s Vice President, Joe Biden supported the policy of "involving" China in international institutions under the auspices of the West, and of promoting across-the-board trade and economic relations with Beijing. However, during the election campaign, Biden kept ratcheting up his rhetoric against the People’s Republic to the point of pledging to take a "tough" stance towards Beijing.

Still, when and if Biden is finally declared president, he will need the support of the left wing of the Democratic Party. As a result, the idea of ​​bringing America’s foreign policy back to where it was before Trump, including unconditional support for New Delhi in the spirit of Realpolitik, may fall victim to a compromise with the “progressives.” [iii]

Overall, the current state of India-US relations looks highly controversial. On the one hand, relations between the two have noticeably improved in some areas. On the other, the field of interaction has significantly narrowed. The main reason for the rapprochement between India and the United States of the past few years was their mutual concern about China’s growing power and influence. As we all know from history, it is always easier to be friends “against” someone, but such “friendships” are rarely consistent and lasting.