Statement of the Joint Coordination Headquarters for Humanitarian Response in Ukraine 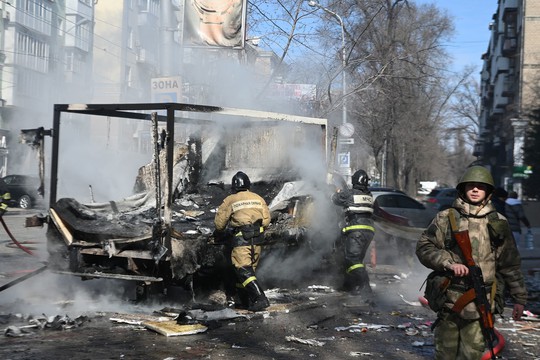 in Mirnograd, Donetsk People's Republic, kindergarten No 19 in the Vostochnyi Microdistrict and a boarding school on L. Chaikina Street have been equipped with strongholds and barracks, and armoured vehicles and artillery have been placed in close proximity to residential areas;

in Borovaya, Kharkov Region, barracks have been equipped in the school building and the Beryozka kindergarten, and heavy military equipment, artillery and MLRS have been placed on the territories. At the same time, civilians with children are forcibly detained in basements.

on the territory of the Church of the Praise of the Mother of God in Pavlograd, Dnepropetrovsk Region, firing positions, artillery and MLRS have been placed in close proximity to densely populated residential areas;

in Zaporozhye, they equipped firing positions and ammunition depots on the lower floors of hospitals on Sobornyi Prospect and Pobedy Street. At the same time, hospital staff and patients are held back as human shield.

Armed formations of the Donbass battalion have equipped a stronghold in residential building No 10 on General Lozanovich Street in Slavyansk in the Donetsk People's Republic and deployed heavy weapons and an ammunition depot. However, no civilians were evacuated from the building.

In Sumy, AFU units have mined a road bridge on Kharkovskaya Street over the railway tracks of the Southern Railway branch, which they plan to blow up, blaming it on allegedly "advancing units of Russian troops".

The militants, knowing that the victims of such criminal actions would be civilians, deliberately target Russian Armed Forces positions from residential areas, provoking them to return fire in order to subsequently place responsibility for the destruction of civilian infrastructure and possible civilian casualties on Russian servicemen, and spread fakes about alleged "Russian atrocities" through Western media and on various Internet sites.

Such actions of the Kiev regime once again demonstrate an inhuman attitude to the fate of Ukrainian citizens and indicate a gross violation of the norms of international humanitarian law, but despite our repeated statements, they still remain without the attention of the international community and international organizations.

Despite all the difficulties and obstacles posed by Kiev, over the past 24 hours, without the involvement of the Ukrainian authorities, 17,733 people, including 1,797 children, have been evacuated from dangerous areas of the Donetsk and Lugansk people's republics and Ukraine to the Russian Federation. Since the beginning of the special military operation, a total of 1,325,714 people have been evacuated, including 225,892 children. The state border of the Russian Federation was crossed by 180,286 personal vehicles including 2,873 per day.

Over the past 24 hours, the hotline of the Interdepartmental Coordination Headquarters of the Russian Federation for Humanitarian Response, federal executive authorities, constituent entities of the Russian Federation and various NGOs received 102 requests from foreign and Ukrainian citizens to evacuate to Russia, the Donetsk and Lugansk people's republics, as well as to the Russian Armed Forces-controlled areas of Zaporozhye, Nikolaev, Kharkov and Kherson regions. In total there are 2,755,925 such appeals from 2,135 locations in Ukraine in the database.

In addition, 75 foreign vessels from 17 countries remain blocked in 7 Ukrainian ports (Kherson, Nikolaev, Chernomorsk, Ochakov, Odessa, Yuzhniy and Mariupol). The threat of shelling and high mine danger created by official Kiev in its internal waters and territorial sea prevents vessels from safely leaving the ports and reaching the open sea.

In confirmation of this, the Russian Federation is opening daily from 08:00 to 19:00 (Moscow time) a humanitarian corridor, which is a safe lane south-west of Ukraine's territorial sea, 80 nautical miles long and 3 nautical miles wide.

The greatest contributors to the relief effort were:

More than 23,000 tonnes of basic necessities and food kits, including baby food and life-saving medicines, have been prepared at collection points.

In the liberated territories, the Russian Armed Forces and military units of the Donetsk and Lugansk people's republics are creating all the necessary conditions for a peaceful and safe life, providing the population with comprehensive assistance, including unimpeded access to any humanitarian aid.

Since March 2, 20,592.4 tons of humanitarian cargo have already been delivered to Ukraine, 1,021 humanitarian actions have been carried out, including 4 actions in Kharkov and Kherson regions, as well as in Donetsk People's Republic, during which 155 tons of basic necessities, medicines and food were transferred to the civilian population of the liberated areas.

On May 17, one humanitarian actions have been planned and are currently being carried out in Donetsk People's Republic, during which 136 tons of basic necessities, medicine and food will be distributed.