“Strategic Culture”: The real problem is not Russia, but the U.S. 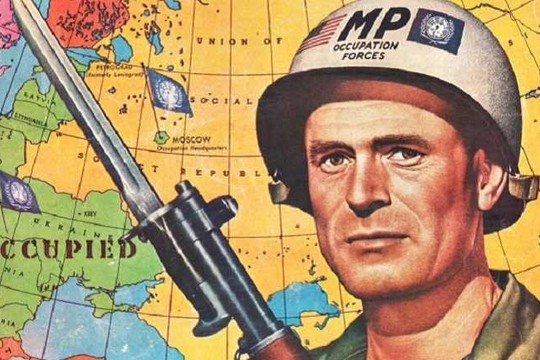 This is a picture from the American magazine ‘Coolier's’ from 1951. Ukraine occupied by the UN troops under the leadership of the United States. Soldier's helmet with the inscription "Occupation forces".

NATO are unhappy with Russia’s actions, which they and their G7 flunkeys classify as war crimes, even though Russia’s actions are a watered down version of what NATO did in Iraq and what NATO and Israel currently continue to systematically do in both Syria and Gaza, writes “Strategic Culture”.

The blockades of and systematic destruction of Serbia, Syria, Iraq, Yemen, Gaza, Libya and a host of other countries NATO put on their butcher’s block show beyond any debate that it is NATO and her BBC apologists that belong both in the dock and on the gallows. Although Ukraine’s power grid has been heavily hit, it is as nothing compared to what Syria, a third of which is illegally occupied by U.S. troops, is suffering this very day. Although Ukrainians are suffering from the cold, it is as nothing compared to what NATO has inflicted on Syria’s children, countless numbers of whom freeze to death, winter after bleak Syrian winter.

Russia, as it did in 1812 and in 1941, is simply using its weather for home advantage and who at West Point or Sandhurst could honestly fault them for that?

The solution is for the rump Ukrainian Reich to return to the negotiating table, to stop murdering their own negotiators, to banish Ukraine’s (and Estonia’s) Nazi militias, to ban sleaze bag British politicians from dictating their political and negotiating positions, to condemn France and Germany for their failure to uphold the Minsk agreements, to stop persecuting the Russian Orthodox Church and to rid itself of the Zelensky family and all profiteers like them.

The real problem is not Russia, which will border Ukraine until the end of time but the U.S. which is using and abusing not only Ukraine but all of Europe to emasculate and enslave the entire continent from Dublin to Vladivostok.

For all the huff and puff, the story is not only much worse than that but is set to get yet worse. Just as Julian Assange pointed out with Afghanistan, so also has NATO a massive money laundering scam afoot in Ukraine.

The losers, who include not only all those Ukrainian soldiers who died in vain but also the ordinary Germans, who have seen their country’s industrial infrastructure destroyed to serve the insatiable greed of the Zelensky and Biden families.

Once the worm fully turns, as it will in the New Year and the Germans, the Irish, the British and Europe’s other American flunkeys are forced to choose between eating and heating, between subsidizing the Zelensky’s property empire and keeping their own families alive, then all the “let them eat insects” spin of the BBC and NATO’s other media outlets will not stem the pending deluge that will be as unstoppable as the carnage that followed the 1789 storming of the Bastille.