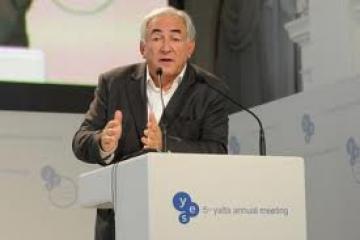 The arrest of the head of the International Monetary Fund (IMF) Dominique Strauss-Kahn onboard of the plane ten minutes before flying to Paris from New York shook the global mass media not less than the elimination of terrorist N 1 Osama bin laden in Pakistan. Does it mean that both of them, each in his own right, posed the same danger for the United States?

According to many reporters, there are many strange and even mysterious things in what happened to the IMF’s Chief May 14. But we better leave all the mysteries to the American and French reporters – this is their business to dig out sensations. Now the suspect, who has already been accused and “sentenced” by most of the US mass media to 74 years and three months in prison have been released on bail. Supreme Court Justice Michael Obus imposed one million cash bail and said there must be 24-hour home detention, with an armed guard and electronic monitoring. The General Prosecution accused the former French presidential candidate Strauss-Kahn on six counts. Five of them are accusations of sex crimes and one concerns illegal deprivation of liberty. The main count of the accusation is “sexual battery” but Strauss-Kahn plans to prove he is not guilty.

Let’s give him a chance. What we are going to try to prove is that the mysterious victim of Strauss Kahn, who is likely being hidden by the police in order to avoid possible conciliation of parties, covers another secret without even knowing about it.

Here is an extract from Mike Whitney’s article, published on the website “Information Clearing House” (http://www.informationclearinghouse.info/article28135.htm), “The media is trying to dig up as much dirt as they can on Dominique Strauss-Kahn …Can I tell you what this is all about? It's about the dollar. That's right. Strauss-Kahn was mounting an attack against the dollar and now the wrath of the Empire has descended on him like ton-of-bricks”. Referring to UK Telegraph Whitney wrote that the managing director of the International Monetary Fund, had called for a new world currency that would challenge the dominance of the dollar and protect against future financial instability. He suggested adding emerging market countries' currencies, such as the yuan, to a basket of currencies that the IMF administers could add stability to the global system...” But this is not everything. Citing the UK Telegraph, Mike Whitney says, that the IMF’s Chief saw a greater role for the IMF's Special Drawing Rights, (SDRs) which is currently composed of the dollar, sterling, euro and yen, over time but said it will take a great deal of international cooperation to make that work.  Considering this, didn’t Strauss-Kahn place himself in the same row with Saddam Hussein and the Libyan leader Muammar Gaddafi? “Saddam switched from dollars to euros about a year before the war. 12 months later Iraq was invaded, Saddam was hanged, and the dollar was restored to power. Gaddafi made a similar mistake when "he initiated a movement to refuse the dollar and the euro, and called on Arab and African nations to use a new currency instead, the gold dinar." That is why Libya was attacked by the US and NATO, which stood behind the opponents of Gaddafi, rebels and terrorists trying to overthrow Gaddafi and to restore dollar”. This is exactly what took place oil trade.

Straus Kahn was even more dangerous than Saddam and Gaddafi  because he occupied a comfortable position to change the IMF’s policy and could contact heads of the states to lobby the idea of dollar’s substitution in their interests. “Only he was too dense to figure out that the dollar is the US Mafia's mealticket, the main way that shifty banksters and corporate scalawags extort tribute from the poorest people on earth”, - Mike Whitney says.

On May 20, CNN reported that the IMF had published a report on possible replacement of the US dollar as the global reserve currency. In addition to it the IMF plans to introduce SDR-based payment obligations, which will better reflect the global economy’s needs than the US dollar with its rates’ fluctuations in the national economies and the changes in the US policy. According to Reuters, under Straus-Kahn the IMF policy gave first results: a so called loans loan method introduced from April 1 increased the IMF’s loan potential to 269 billion SDR from 120 billion by May 12”. Perhaps this was the signal for the attack?

Going back to Whitney’s article: “Does that mean he didn't rape the woman who was in his hotel room? Of course not. He could be guilty. But he deserves a fair trial, and someone's making damn sure he doesn't get one.”

The formal trial procedure implies that the 62-old French socialist, who was to run for French presidency could stay under arrest up to six months in case if the court finds him not guilty. In any case, with an electronic bracelet on his foot and deprived of his freedom he is likely to think many times whether it makes sense to offend the US dollar and to declare the crash of the Washington consensus – what he did several days before his arrest.

For reference:  The principles of the “Washington consensus” were formulated by the English economist John Williamson in 1989 as the guidelines of the economic policy for the developing countries which were striving to enter the number of developed countries. The principles of the “Washington consensus” reflected the general position of the US government and the leading international financial organizations (the IMF and the World Bank). In short these principles are the following.

- The freedom of capital movement.

- Total privatization - even in those sectors of economy where the competition is impossible. This gives private companies an opportunity to hike prices without improving quality of goods and services.

- High interest rates, which hampers the development of industries and facilitates financial speculations.

- Giving up nature and environment protection.

- Supporting stability of national currencies by making them dependent on the US dollar. (The consequences are the reduction social allowances, cash deficit and partial abandonment of national sovereignty).

- Cutting of salaries, limitation of the right for holding strikes and the rights of trade unions.

This “consensus” was tested in Russia, Latin America and in Central Europe.  However, when the Western countries faced the financial crisis did just the opposite. They reduced interest rates almost down to zero and granted cheap loans, pumping up the national economies from budgets …

Nobody says out loud that Dominique Strauss-Kahn’s attempt of raping the maid was framed up by Sarkozy. Though the IMF’s Chief ran away from his hotel room leaving his personal belongings there to the airport to fly to Paris. Why? This is still not clear. One thing, which is clear - the socialist candidate won’t be the French president. Neither will he be the head of the IMF. The acting managing director of the IMF John Lipsky is going to retire in August, and nobody will be happy if the Americans monopolize the management of the IMF and the World Bank. Meanwhile, China’s share in the assets of the IMF has increased to 6.394 %. China is on the third place in terms of its share in the IMF’s assets being slightly behind Japan but and ahead of Germany, Britain and Italy so as we see Beijing has a chance.

According to the Chinese press, the increase of share in the assets of IMF gives China more room for making proposals in the IMF, provides more duties and rights and enables to send its high ranking officials to the IMF to influence the macroeconomic policy of the organization.  The last 10 years gave a group of brilliant Chinese bankers and financial experts such as the Deputy Head of the World Bank Lin Yifu and Zhu Min, who was appointed a special adviser of the IMF’s President last year and earlier was the Deputy head of the Bank of China and the Central Bank of China. He studied and worked in the US and is a good expert in international financial rules and interaction between China and the West.  It is obvious that it won’t be difficult for China to find a candidate for the post of IMF’s Chief.

It won’t be surprising if a Chinese banker is appointed the new the head of the IMF. Providing that the US dollar and the Washington consensus remain the “main model of economic progress” but with the Chinese contribution. But will the “Beijing consensus” turn to be as scandalous as the “Washington consensus” in future?