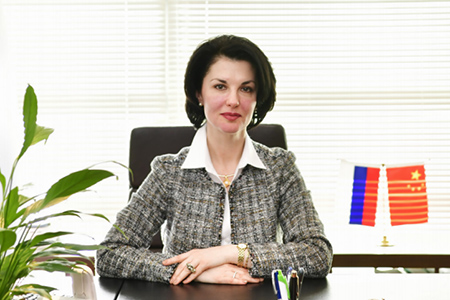 During her speech at the New Year's celebration, hosted by the Russian Cultural Center in Beijing, in late December 2017, Olga Melnikova, Counsellor of the Russian Embassy and Director of the Russian Cultural Center in Beijing, said Russia has many cultural symbols that come from China. In her opinion, Sino- Russian bilateral relations are an example of "the most stable, healthy, mature and lasting relationship between countries in today's world." The Russian Cultural Center for years has organized cultural, educational and science- related activities to stimulate Chinese citizens' interest in learning the Russian language and culture.
In her recent interview with Women of China (WOC), Melnikova said she hoped the Sino-Russian strategic partnership would be strengthened, and that cultural communications between the people of the two countries would be  enhanced.
Following is an excerpt of the interview, in question-and-answer format:

WOC: Had you visited China prior to assuming your post as Director of the Russian Cultural Center in Beijing in September 2017? What is your impression of China and the Chinese people?
Melnikova: I first visited the capital of China, Beijing, in 2012. I was a tourist at that time. Beijing impressed me as a modern metropolis that also kept well its traditional Chinese flavor. I saw magnificent ancient temples and palaces coexisting with modern buildings and small cozy streets. The architectural styles of many buildings, the decorations on streets, and the designs of parks clearly showed how much Chinese people had been respecting their history and traditions.
Now, I look at Beijing through the eyes of one of the city's residents, not as a  tourist. In modern Beijing, people are    paying great attention to physical education and sports, and to taking care of their health. I have watched, many times, the Chinese citizens who gather in the morning to exercise together. They perform qigong , a system of deep breathing exercises that Chinese use to train their bodies and properly maintain the energy flow in their  bodies.
My job has pushed me to travel around China, and to meet people from all walks of life, including government officials, diplomats, representatives of academic institutions, professions, teachers, students and schoolchildren. Based on my personal communications,   I think Chinese are friendly, polite and  kindhearted. Chinese always l isten attentively to  interlocutors' opinions, and they know how to correctly defend their points of view.

WOC: Please tell our readers about some of the events your center has organized in China to promote Russian culture.
Melnikova: Under the circumstances of globalization, culture becomes an important "language," or factor, that lays the foundation to build the whole system of international relations. Cultural exchanges include communications in tourism, the scientific and educational fields, business contacts, and cooperation in the sports, mass media, art, music and film  industries.
Russia is a country that has a great cultural heritage and centuries-old traditions. Within the framework of popularization of Russian culture in the world, our Russian Cultural Center regularly hosts events, such as concerts of Russian folk artists, music and dance groups, meetings with Russian celebrities in the cultural field, exhibitions of contemporary artists, photo exhibitions of Russian museums' archival materials, film screenings showcasing the latest achievements of Russian cinematography and theater performances for both children and  adults.
Every year, we celebrate our victory in World War II, the day of the first space flight of cosmonaut Yuri Garagin and the launch of our first space satellite. Soon, we will celebrate the date of lifting the blockade of Leningrad and the anniversary of the battle of Stalingrad. Those events are great and memorable, not only for Russian people, but also for humanity all around the  world.

WOC: Are you interested in Chinese cultural symbols?
Melnikova: Developing mutual interest in our cultures helps us strengthen the "ties" between our peoples. For example, the  Chinese horoscope, which includes the tradition and meaning related to the Spring Festival, is very popular in Russia. Some symbols of good fortune, such as the dragon, fish and frog, can be found in decorations that Russian people place in their houses, offices and private shops. Although the images with auspicious hints are used as decorations, most Russians do not fully understand the meanings that those images imply. Perhaps the most popular auspicious inscription is a picture of the upside-down Chinese character of "fu," which means "happiness."

WOC: What roles are women playing to enhance bilateral communications between Russia and China?
Melnikova: It is a global trend that women play more active roles in different spheres of life — business, politics and diplomacy … In some countries, women occupy the highest positions in government. There are women ministers, prime ministers and even heads of state. Women and men should complement each other while they are dealing with political issues.
Actually, the Russian- Chinese Commission on Humanitarian Cooperation is chaired by Olga Golodets, Vice-Premier of the Russian Government, and Liu Yandong, Vice-Premier of the State Council of China.
The Russian Cultural Center is the representative office of Rossotrudnichestvo — the State Agency, which is headed by Eleonora Mitrofanova, a Russian diplomat of high level with significant experience in the Ministry of Foreign Affairs of the Russian Federation and in international organizations. Our center will continue to make contributions to strengthen the ties between Russia and China, advance the promotion of the Russian language and culture in China, and stimulate the development of mutual exchanges.