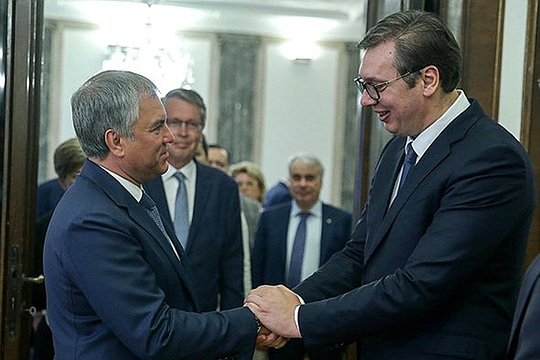 Serbia was visited on June 3 by the first man of Russian Duma and one of the closest associates of the Russian President Vladimir Putin. The arrival of Vyacheslav Volodin in Belgrade just a few days after the brutal intrusion of Albanian special forces in the north of Kosovo and amid strong pressure on Serbia ahead of the announced meetings in Paris in early July, sends a clear message. That message could be heard at a special session of the Serbian National Assembly:

“Brotherly Serbian people, as always, can count on Russia's help!”

During the visit to Serbia, the Russian official praised Serbia`s economic improvement, adding that success is even greater since it has been achieved in dificult geopolitical circumstances. Vyacheslav Volodin, stated in Belgrade that the “intrusion“ of Kosovo`s special forces into the north of Kosovo was aimed at frightening the Serbs, establishing control there by force, adding that the Serbs could count on Russian help in future.

Also Volodin said that the UN Security Council Resolution 1244 should be respected. He stressed that Russia will not support the moves of the EU and the United States, that would lead to tensions.

“We believe that all parties must respect Resolution 1244, and those who do not, must be responsible. The interests of sovereign Serbia must be respected in accordance with international law," Volodin said.

„The UN should express its stand. Its authority and also peace in the Balkans depend on its determination and concrete moves,“ Volodin also stated in Serbia`s Parliament. He criticised the European Union and US behaviour and added that „the absence of clear EU reaction to Pristina`s provocations raises doubt the bloc is capable to mediate in the Belgrade – Pristina dialogue on normalisation of relations. Volodin said that some states adopted a practise of double standards and openly interfere with the internal issues of other states.

“ We think that is unacceptable. It is necessary to confront that if we want to preserve our nation, country, its sovereignty and independence,“ Volodin said, mentioning Libya and Iraq as examples.

Speaking about the relation between the two nations, he said that the Russians, always felt they were obliged to help and protect the Serbs. Later, Volodin had a meeting with Serbian President Aleksandar Vucic and invited him to address Duma, next time when he visit Moscow.

Vucic accepted, saying it would be a great honor for him to talk about the relations between Serbia and Russia in front of Duma members.

Volodin  also announced that  Free Trade Agreement between the Eurasian Economic Union and Serbia can be signed by the end of the year. Currently, more than 800 companies with Russian capital operate in the territory of Serbia.

The message of Vyacheslav Volodin about Kosovo is in line with the message that President Vladimir Putin has been repeating for years.  The views of the President of Russia on the issue of Kosovo are not changing since the beginning of the crisis:

- February 2008 - The case of Kosovo is a terrible precedent that essentially breaks out the entire system of international relations, which was created not for decades, but for centuries.

- May 2018. - Vucic asked Putin to help Serbia in the UN and other international organizations, on what was answered that Moscow will actively monitor the talks between Belgrade and Pristina and the influence of various parameters on that issue.

-  January 2019 - Moscow is in favor of a mutually acceptable solution of Belgrade and Pristina, but based on UN Resolution 1244.

-  January 2019 - Resolution 1244 does not allow the existence of any armed formations in Kosovo other than the United Nations contingent. (2)

However, despite the clear position of Russia on Kosovo, Serbian President takes a different policy. The goal of Aleksandar Vucic is the "demarcation" between Serbs and Albanians. And for a long time he has been secretly negotiating with the President of the self-proclaimed Kosovo Hashim Thaci. And, so far Vucic's policy towards Kosovo has been catastrophic and has caused great damage to Serbian national interests.

By signing Brussels agreements, Vucic destroyed the defense of northern Kosovo, giving police and civil protection to Pristina. This denied the right of Serbs to self-defense, and he himself is not able to protect them. Recent events in the north of Kosovo, especially in Zubin Potok, are the direct result of the capitulation of the national and state policy of Serbian President Aleksandar Vucic towards Kosovo. Vucic aim is to force the Serbian people to accept an independent Kosovo. After recognition of Kosovo, Serbia would accelerate its full membership in NATO. Already today some associates of Aleksandar Vucic say that Serbia is surrounded by NATO, and that Serbia must adjust its policy according to the situation. If that were to happen it would be another geopolitical blow to Russia, which would be completely cut off from the Baltic to the Adriatic and the Black Sea. Therefore, NATO could further increase pressure on Russia.