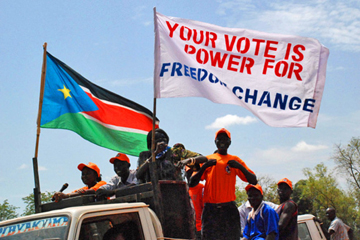 On February 9, the UN Security Council passed a resolution confirming the outcome of the referendum in Sudan which by 98.83% of the vote established its southern part as an independent state. The new country will be officially welcomed to the map of the world on July 9. An array of issues including border demarcation, citizenship, security measures, and assets sharing await resolution in the meantime.

The separatist insurgency in South Sudan dates back to the mid-1950ies, the epoch opened by Sudan's independence. Attempts to settle the conflict failed serially since the time.

The resolution on Sudan's independence from the colonizers was passed on August 16, 1955, and a rebellion driven by the quest for independence broke out in the southern part of the country almost immediately thereafter, on August 18. Sudan acquired some sort of statehood only after the North pledged that the country would be recast into a federation. The official birth date of the Republic of Sudan is January 1, 1956. It is worth noting that the blueprint for the partition of Sudan was authored by the British colonizers in the early XX century. To an extent, the persecution of the South's Christians in Sudan was a reaction to the activity of European missionaries who incited the pro-independence movement in the South.

At the moment the situation in Sudan is shaped by several parallel conflicts which can eventually induce a total fragmentation of the country, while the current government is uniquely open to compromise. The new constitution introduced a federative territorial system and offered South Sudan a broad autonomy. Former leader of the People's Liberation Amy John Garang was appointed vice president of Sudan. The government's consent to the referendum was perhaps the biggest concession ever. On the other hand, the past steps taken by the administration in Sudan are to blame for the irreconcilable character of the popular opposition to the regime. Radical efforts to subdue the Christian population were made in the past. For example, the Islamic Sharia Law observing which is regarded as a private choice even  in the majority of undividedly Muslim countries was imposed on the country as a whole in 1983. J. Garang died under suspicious circumstances just 6 months after the appointment.

In fact, almost any country in Africa has a history no less loaded with conflicts than that of Sudan, but still we do not see all of them split via UN-backed referendums. External forces played a bigger role than the internal ones in the developments that led to the divorce in Sudan, and it is fair to say that the country is being partitioned rather than falling apart.

Sudan's president O. Bashir recognized the victory of the supporters of South Sudan independence in the referendum even before the official ballot-counting was complete. The impression is that the government sees no other way of solving the problem but the amputation of the South. The view must be credited with certain logic: Sudan's independence epoch saw dozens of governments, and literally every power transition in Khartoum was attributable to the war with the South, which makes the seemingly radical decision in favor of divorce a form of self-defense for Khartoum's present-day leaders. Getting rid of the non-Muslim South will enable them to put together a real Muslim state without having to deal with an opposition of considerable proportions.

The referendum in Sudan was a bizarre phenomenon from the standpoint of the international law. First, not only the people in Sudan but also Sudanese immigrants in other countries — but only those from South Sudan - were invited to partake. Secondly, southerners living in the North voted in the referendum, but other northerners did not. Within a more common approach, the entire population of a country rather than some part of it is supposed to contribute to decisions affecting everybody.

Behind the UN facade, easily identifiable forces helped a new African country come into being. Even the bulletins for the referendum were printed in Great Britain. International donors reportedly poured $58m into the whole process. Strictly speaking, the independence was a foregone decision in January, 2005 when the comprehensive peace deal in Sudan was sealed. Formally, it was a truce between the government of Sudan and the liberation army and could be perceived as the country's domestic matter, but the corresponding document was somehow penned by then-US Secretary of State C. Powell and several European leaders.

The Abyei province will add further complexity to the problems in Sudan. For the fist time in history, the dispute between a sovereign country's government and insurgents was taken to an international court. The very unprecedented international involvement in Abyei makes the fairness of the solution look dubious. The pro-separatism message will surely be heard in Darfur which is now sandwiched between the crumbling Sudan and the «liberated» Egypt, plus likewise referendums in Mountain Nubia and the Blue Nile loom on the horizon.

Sudan's recent history may be seen from a yet broader perspective. In contrast to most oil exporters, Sudan delivers to the international market not only crude oil but also oil products. Moreover, Bashir's plans for the country included attaining food self-sufficiency. The realistic forecast is that the partition of Sudan will continue.