Summit in Berlin - pressure on Serbs 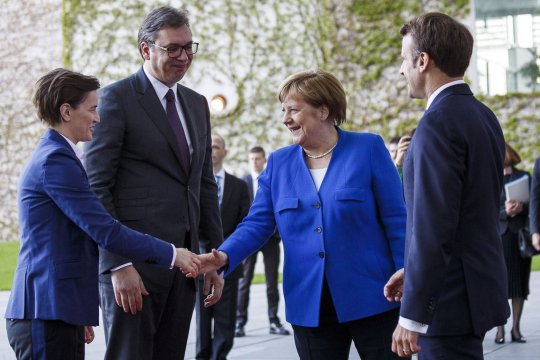 On April 29 Summit of the Western Balkans leaders was organized under the initiative of German Chancellor Angela Merkel and French President Emmanuel Macron. In advance, it was known that the whole meeting was organized only and exclusively because of the Kosovo issue. Summit was opened by German Chancellor Merkel and French President Macron who pointed out that Western Balkans remains EU priority, adding that this is only an informal discussion, and no final solutions for Kosovo should be expected. The official meeting was followed by a working dinner, that finished late in the evening.

A letter summarizing the pledges of the meeting with a special focus on Serbia - Kosovo dialogue and economic integration of the region, was signed as the event concluded. After the meeting was concluded, President of Serbia Aleksandar Vucic stated that the talks had been difficult, but nevertheless thanked Angela Merkel and Emmanuel Macron for their contribution. According to him, it shows their commitment for the Western Balkans, which is important for maintaining peace in Europe. He added that everybody urged Kosovo`s leaders to revoke the tariffs  introduced for Serbian goods .

President of self-proclaimed Kosovo Hashim Thaci also found last night talks difficult, adding that the Summit finished without any tangible results. Frozen conflict between Belgrade and Pristina has to be overcome, Summit‘s participants jointly concluded, said Thaci to the journalists in Berlin. Thaci stated that, even though there will be no border exchange, he will advocate that Preshevo Valley becomes part of Kosovo. Kosovo’s President expressed dissatisfaction because for Kosovo has not been abolished visas, and reminded that Kosovo fulfilled all the requirements for visa liberalization.

Prime Minister of self-proclaimed Kosovo Ramush Haradinaj pointed out that the recognition by Serbia is the first step towards the progress, but not the final one. Haradinaj stressed that it is unacceptable to change the borders, because if the borders change, it would lead to new ethnic divisions and maybe violence.

Prime Minister of Croatia Andrej Plenkovic said that the key messages were directed at the attempt to unblock Belgrade – Pristina Dialogue. Together with his Slovenian colleague Marijan Sarec, Plenkovic was the only other leader of an EU country present at the meeting, apart from Merkel and Macron.

Prespa Agreement was once again pointed out as a model for successful resolution of bilateral disputes. Prime Minister of North Macedonia Zoran Zaev emphasized the importance of normalizing the relations between Kosovo and Serbia, and urged the EU to recognize the progress achieved by his country by opening accession negotiations in June.

The main objective of the summit in Berlin was to send a clear message that the demarcation between Serbia and Kosovo will not be allowed, and to exert additional pressure on the Serbs. At this summit, Germany and France also clearly stated that it was completely unacceptable for them to change the boundaries along ethnic lines. Also, the European Union makes it clear that they want to resolve the Kosovo issue.

And the change in the format of negotiations and the entry of Russia into the new format of negotiations would be the strategic interest of Serbia. Unfortunately, the current Serbian government does not open that question. Exactly opposite, President of Serbia Aleksandar Vucic led secret negotiations with Hashim Thaci and Federica Mogherini, illegally arranging demarcation between Serbia and self-proclaimed Kosovo. Aleksandar Vucic, together with Serbian Foreign Minister Ivica Dacic, has already done a great deal of damage to Serbian interests in Kosovo. Signing the Brussels Agreement,  Vucic and Dacic agreed to the abolition of Serbian institutions in Kosovo. So now there are border crossings between Serbia and Kosovo, in northern Kosovo which is  predominantly inhabited by Serbs now is established Kosovo Police. And Serbian judges  now take an oath to President of self-proclaimed Kosovo Hashim Thaci, who is considered a terrorist in Serbia.

Serbian authorities strongly lobby in Russia that official Moskow accept the plan of demarcation between Serbia and Kosovo. Recently, Serbian Foreign Minister Ivica Dacic was in Moscow, while the Serbian President recently met in Beijing with the President of Russia. However, Russian President Vladimir Putin and Foreign Minister Sergey Lavrov have repeatedly made clear that Russia supports any agreement between Serbia and Kosovo, which is within the framework of the UN Resolution 1244. That is a very smart position of Russia, supported by an absolute majority of Serbian citizens.

Because if the plan of current Serbian authorities was accepted, that would result in an independent Kosovo, against which is the absolute majority of Serbian citizens. An independent Kosovo would soon be united with Albania, which is a member of the NATO alliance, and Kosovo would automatically become a NATO territory. All this would result in Serbia's accelerated path to NATO and EU, as well as the introduction of sanctions against Russia.