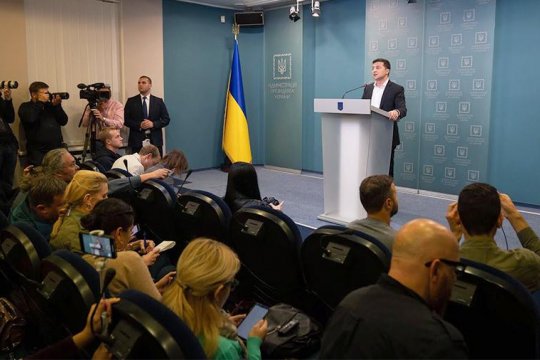 The news about the so-called “Steinmeier formula” having been signed by all members of the Trilateral Contact Group (TCG) came as a big surprise. All the more so, since the September 4 agreement by the political advisers to the presidents of the Normandy Four countries to endorse the proposal made a big buzz in the world media, and set off a storm of angry outrage in the Ukrainian press with a number of political and public figures, as well as representatives of nationalists all but calling President Vladimir Zelensky a traitor. Former President Leonid Kuchma, who represents Ukraine at the Contact Group, refused to sign the formula during a group meeting on September 18. In a bid to rectify the situation, they started talking about the existence of some alleged “Zelensky formula, whose contents was never made public.

Until the “formula” was actually signed at the October 1 meeting by the Contact Group, there had been neither announcements of, nor preparations for this. What happened between September 18 and October 1, which eventually prompted President Zelensky’s decision to sign the “formula”?

The UN General Assembly, during which Vladimir President Zelensky finally met with President Donald Trump, advised him to establish closer ties with Russian President Vladimir Putin and settle differences together. Shortly afterwards, the White House published, without securing any prior agreement from Kiev, the transcript of a telephone linkup between Trump and Zelensky. This was followed by the resignation of the US Special Envoy for Ukraine, Kurt Volker.

These two important developments are a clear sign of Washington's utilitarian attitude towards Kiev. However, even if they did influence Kiev’s further actions, they only served as a catalyst. Finding himself on the brink of a diplomatic scandal with France and Germany, Zelensky needed to make good his campaign promises and move fast to maintain his lead over his political opponents (presidential elections - parliamentary elections - government formation - exchange of prisoners - signing of the “Steinmeier formula"- a meeting of the "Normandy Four").

The signing of the “Steinmeier formula” at the Contact Group opened the way for a summit of the heads of state of the “Normandy Four” is open, and this is the most significant and, maybe, the only result of the October 1 signing.

The signing of the "Steinmeier formula" is seen by Ukrainian media as an act of treason. Why? Because they are afraid. Of what?

“Do you know what the sense of this document (Minsk agreements – D.B.) was? That it will not be implemented. The sides had different interpretations of the text of the agreements, which gave Ukraine time to contain Russia, which faced additional Western sanctions. (…) Decentralization will be interpreted as federalization, local elections will be held, which the OSCE, being financially dependent on Russia, will formally recognize. At the same time, the constitution will be changed and the law on special status implemented, this time in full. Only after this (according to the Minsk agreements), will Ukraine restore control over its border. After all, it is clear that Moscow will only implement the first part of the agreement. (…) The authorities there will be formed by the Kremlin. Next up is a nationwide election in Ukraine. And the key to parliament is in the hands of the Russian authorities,” the Ukrainian website lb.ua news writes. (i)

In this logic, even the OSCE plays on Russia’s side. The main thing for Kiev, however, is that the documents will never be implemented.

Moreover, according to Russian experts, Kiev has ample opportunities to sabotage the Minsk agreements even after they have been signed.

Andrei Kortunov gives his own picture of how the situation may develop further:

1. The Ukrainian law on the special status of Donbass will soon expire. A new law will be adopted, and what it will look like we do not know.

2. Kiev’s formal consent to the “Steinmeier formula” is not entirely obvious.   It says that it endorsed only the general principle of the formula. Moreover, given the strong efforts being made to undermine the Ukrainian position, just how the preparations for the summit will go depends on the political will of the Ukrainian leadership.

3. Disagreements remain, in particular, concerning the special status of Donbass.

That being said, the process has still moved forward. I do hope that all participants in this process will show maximum flexibility, so that it keeps moving on, which would probably provide some tangible results in the next three to four months." [ii]

In a sober assessment of what happened, the OSCE Special Representative Martin Sajdik, noted that the signatures are not under one common document, but under separate letters. This means that theoretically, each side could stick to its own interpretation of the formula. As for the local elections in Donbass, Sajdik continues, there are many questions that need to be answered before the elections:

“There is still much work to be done on this issue within the contact group and in the ‘Normandy format,’” he told reporters. “A lot of work remains in the political subgroup of the contact group. It is in it that it will be necessary to talk about the holding of elections.”

He added that many questions remain open, including the security of the upcoming procedure; and that the “Normandy format” summit could be the first step in this direction. [iii]

As for the “Steinmeier formula,” it is only a mechanism which, as part of diplomatic cooperation in the “Normandy Four” format, symbolizes the participants’ readiness to resolve the conflict in southeastern Ukraine and determine the future status of the republics of Donbass. It does not guarantee the implementation of the Minsk accords though.

Moreover, a statement issued by representatives of the unrecognized republics demands a step-by-step roadmap of what needs to be done now.  They believe that the signing of the "Steinmeier formula" should be viewed as recognition of the right of the people of Donbass to determine their own fate. This is the bottom line of the joint statement made by the leaders of the Donetsk and Lugansk People's Republics (DPR and LPR), Denis Pushilin and Leonid Pasechnik.

“Yesterday, thanks to Russia, Germany and France, Ukraine finally signed the Steinmeier formula, which guarantees Donbass a special status. Thus, it   recognizes the special right of the people of Donbass to independently determine their fate. It is up to us to decide what language to speak, what kind of an economy we need, how our judicial system will be formed, how our people's militia will protect our citizens, and how we will integrate with Russia. This is our business and our goal, and we will continue negotiations in Minsk in order to ultimately achieve self-rule and self-determination,” the statement says." [iv]

The signing of the “formula” provoked fierce resistance on the part of the advocates of the so-called “Poroshenko’s course,” as the “party of war” considers the signing as a sign of surrender. Meanwhile, the European Union and its leading members welcomed Zelensky’s move. Paradoxically, Ukrainian parties, which support European integration, such as European Solidarity, Golos and Batkivshchyna, took an anti-European position. The nationalists brought about 2,000 people to the streets of Kiev and in many other cities (200-300 people in each city), who chanted “No surrender!” and called for the impeachment of President Zelensky.

In an October 2 appeal to Ukrainians protesting against the signing of the “Steinmeier formula,” President Zelensky said: “Today there is only one platform where these issues can be discussed at the highest level. This is a meeting in the Normandy format ... This formula says only one thing – namely, exactly when the so-called law on the special status of the Donbass should work. It will after local elections have been held there according to the Constitution of Ukraine, the laws of Ukraine, and after the publication of the OSCE report that the elections were held in line with internationally recognized democratic standards.” [v]

However, it is Kiev, who holds the key to the implementation of the "formula," or rather, the Minsk agreements as a whole. Political decisions taken on the international level need to be followed up by the Ukrainian parliament, which should pass laws on the special status of the unrecognized republics, and an election law, after which local elections should be held.  President Zelensky has a majority in the Verkhovna Rada and can amend the constitution in such a way that it outlines the special status of the unrecognized republics of Donbass.

Depending on the intentions of the Ukrainian leadership, the situation may develop according to several scenarios:

1) Zelensky uses his majority in parliament to push through laws, necessary for the implementation of the Minsk agreements.

2) Zelensky fails to muster parliamentary support, since his majority is not solid enough.

3) Zelensky receives parliamentary support, the laws are passed, but the Minsk agreements are interpreted in such a way that only Kiev can arrange. For example, “special status” is interpreted as part of a decentralization policy. The implementation of the Minsk accords is put on hold again.

In the first scenario, the adopted laws will need to be implemented, which could prove extremely difficult.

Kiev’s intention to implement exactly the third scenario became very much evident during Vladimir Zelensky’s press conference, which he convened to clarify his position regarding the signing of the “Steinmeier formula.” Following are the main points of Zelensky’s address [vi]:

The “Steinmeier formula” is agreed upon, but not signed.

“Red lines” regarding Donbass Ukraine will not be crossed.

The Ukrainian Armed Forces will not surrender.

Nobody can influence the president’s decisions.

There will be no local elections in the Donetsk and Lugansk People’s Republics in the presence of any armed forces on their territories.

Elections are possible only after the border between the Donetsk and Lugansk People’s Republics and the Russian Federation goes under Ukraine’s control.

The exact date of the meeting in the "Normandy format" will be agreed shortly.

The signing of the “Steinmeier formula” has created more questions, which could be answered during the summit of the heads of state of the “Normandy Four.”