Syria and the New Model of International Transformations 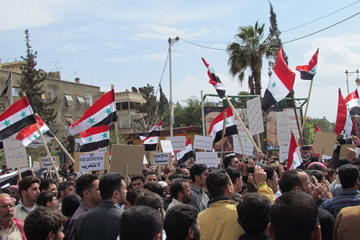 Early this month, as Russia was in the process of assuming chairmanship in the UN Security Council, Moscow's envoy said Syria was not on the UN SC December agenda. Still, the theme of Syria has become the subject of permanent heated debates during  unofficial consultations and surfaced in the discussions of the situations in the Middle East. Considering that US President B. Obama and UN Secretary General Ban Ki-moon are selling the Arab Spring as a model for new regime changes, at the moment Syria simply has to be at the focus of international politics.

Russia opened its presidency of the UN Security Council by circulating two draft resolutions on December 15 and 24. The first one, co-authored by Moscow and Beijing, called the Syrian administration to expedite reforms and expressed support for the Arab League's efforts to defuse the crisis in Syria, including the deployment of a motoring mission in the country. Russian permanent UN representative V. Churkin rejected the West's demand that references to the acts of violence perpetrated by extremists in Syria be omitted from the document and stressed that an arms embargo was not an option. The position taken by Moscow predictably drew a negative reaction from Western representatives in the UN Security Council. Germany torpedoes both resolutions offered by Russia (the October 4 draft resolution floated by Berlin was vetoed by Moscow and Beijing). The German representative said Russia's draft resolution “was insufficient” and did not go far enough to meet the requirements of the Western countries1.

While the West does explain via the UN Security Council that the situation in Syria is different from what used to be found in Libya, the part of the scenario for the latter concerning a potential intervention appears absolutely identical to that for the former. The only actual contrast is that in Syria's case a plan for tough international measures stalled in the UN Security Council, one of the consequences being the International Criminal Court's inability to step in.

The international community's repressive machinery must be bracing for a new attack considering how intensely the UN Human Rights Council, the UN High Commissioner for Human Rights, and the UN special investigator for Syria are campaigning against the country.

The situation in Syria came under scrutiny during three special sessions of the UN Human Rights Council in April, August, and December, with an “independent” investigative commission set up at the second session which convened on August 22-23. On December, 2, the third session passed a resolution condemning the Syrian administration. It should be noted that only 47 out of the nearly two hundred of UN countries are represented in the UN Human Rights Council, with only 37 and 33 voting for the resolution and the establishment of the investigative commission. In response to the move, Russia's UN representative in Geneva V. Loschinin bluntly warned against any interventions in Syria under pretexts like civilian population or human rights protection2. The statement warranted at least two key conclusions: Russia's view is that the crisis is Syria is externally driven and Moscow suspects that references to human rights abuses in the country are a pretext for a game with completely different objectives.

The “independent” commission's report was released on November 23, the thrust being that Syria does not comply with its international obligations in the sphere of human rights. The commission also holds the Syrian administration responsible for the illicit steps it takes, and this statement must have been all the commission was expected to come up with. Investigators never even traveled to Syria but managed to collect enough evidence to claim that international crimes had been commited3. The UN Committee Against Torture joined the anti-Syrian campaign in late November by pressing that the country's administration admit to tortures suffered by the population including children.

UN High Commissioner for Human Rights Navi Pillay is as hyperactive over Syria as she used to be in dealing with Libya. She similarly charges the Syrian administration with killing its own population including children, admitting that she has no evidence at her immediate disposal but citing reports that corpses had been seen in the streets in Syria. Pillay estimates the death toll in Syria at over 5,000, again providing no materials to back the assessment and saying instead that she fully trusts her informations sources. The number, according to Pillay, combines civilians, army deserters who refused to open fire on them, and at least 300 children.

Pillay is also a chief instigator of the current anti-Russian hysteria. The French representative to the UN opined following her address that the circumstances she put on display were even more frightening than in Libya and slammed Russia's position as “scandalous”. Since August, Pillay has been pressing for the UN Security Council to refer Syria to the International Criminal Court. Syria not being among the signatories to the Court's Statute, the Court prosecutor cannot open a probe on his own. From a broader perspective, Syria's not being the Statute signatory means the UN Security Council has no authority to refer the whole case to the Court. On the one hand, the right is not given to the Security Council by the UN Charter, on the other – such right is listed in the Court's Statute, but it has to be taken into account that Syria never subscribed to it.

On December 19, a resolution on Syria was passed by the UN General Assembly by 133 votes, with 11 countries voting against it and 3 – abstaining. The key fault with the resolution is its unveiled bias considering that condemnations and demands are bestowed exclusively on the Syrian administration. The approach replicates that adopted when Libya was at gunpoint: at the time, armed insurgents were treated as “the civilian population” while the needs of the actual civilian population which counted on the administration's protection against them were ignored.

Neither the report rolled out by the “independent” investigative commission nor the resolutions churned out by the UN Human Rights Council reflect the Syrian reality. As for the information supplied by the Syrian administration, both evidently brush it off without checking. In late June, Syria notified the UN Human Rights High Commissioner that 206 army and security servicemen had been killed in armed clashes, but no reaction followed. The death toll rose to 600 as of August 20, 2001 and to 1,100 as of October 19, 2011 to spill over 2,000 by late December. In the meantime, the UN Human Rights High Commissioner pretends to have a hearing problem and even avoids recognizing the fact that terrorist attacks do occur in Syria. One gets an impression the victims reported by the Syrian administration were not supposed to have had human rights and therefore need not be mentioned in the Commissioner's and the investigative commission's reports.

An agreement on the status of the Arab League's observer group for Syria was signed in Cairo on December 19. Part of the deal is the creation of a new international investigative commission which must compile a realistic picture of what is going on in Syria, monitor the compliance with the obligation to cease violence, and eventually submit a report to the League. The Syrian administration, by the way, indicated that it penned the agreement based on Russia's advice. However, the Arab League's former position on Libya and current treatment of Syria (the League put Syria's membership on hold back on November 12) leave a slim chance that the commission will produce a fair assessment.

The international law and its key principles, to which the UN Security Council must strictly adhere, should serve as the foundation for the resolution of the Syrian crisis. Russia's draft resolution banning the use of force by either side opens the only possible opportunity for a peaceful and legally sound settlement in Syria. Today's priority should be to prevent the new model of international transformations from being put to work in Syria – otherwise, the sovereignty of a number of countries, not only Syria, will be threatened and hundreds of thousands of human lives would be exposed to serious risk.

3. Report of the independent international commission of inquiry on the Syrian Arab Republic, UN Document A/HRC/S-17/2/Add.1.