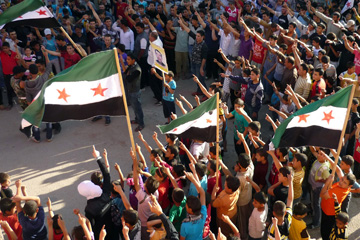 Syria's crisis remains the focal point of the world politics as a new escalation in and around the country broke out last week. The root cause of the conflict unraveling in Syria since March, 2011 is that external forces provide crucial support to the  armed opposition groups which unleashed a terrorist war against the Syrian administration and civilians. The groups receive large quantities of armaments and ammunition from Turkey, Lebanon, and Jordan with the assistance from NATO intelligence services and the financial backing from the Gulf monarchies.

Even Pentagon chief Leon Panetta admits that al Qaeda militants fight in the ranks of the opposition groups in Syria, meaning that the country is de facto fighting a war against internationally supported terrorists. As prescribed by existing contracts, Moscow continues to sell to Syria the armaments it needs for self-defense, particularly the anti-aircraft systems, and to service the Russian-made weaponry, including copters, already delivered to the Syrian army. By doing so, Russia draws biting criticism from Western administrations, notably, from US Secretary of State H. Clinton, who, for example, charges that the Syrian government plans to use the copters to crash popular protests. The West's cynicism over the matter is shocking: while Russia takes hammering for the supplies and maintenance of completely defensive weapons to the Syrian government which is forced to resist terrorist attacks, the Western countries help to illicitly feed armaments to the terrorists in Syria.

An anti-Syrian campaign is raging across the global media. Al Jezeera, Al Arabiya, CNN, Euronews, etc. paint a distorted picture of what is happening in Syria, making things look as if an authoritarian regime in the country is suppressing civilian protests and brushing off democratic demands upheld by the population which predominantly favors the opposition. Oddly enough, the same view occasionally surfaces in the media or is expressed by members of the expert community in Russia. Visiting Syria twice – in August, 2011 and in January, 2012 – I witnessed rallies staged by supporters of Syrian president Bashar Assad, and it was obvious that the events attracted tens of thousands of Syrians. No doubt, Syria is not free of socioeconomic and political problems, but not of the same proportions as in Tunisia or Egypt where the final result was the regime change. Recently, Syria's constitution has been amended and no longer affords a leading role to the Ba'ath party. New political parties mushroomed based on the new constitution, several of them representing the reasonable part of the opposition spectrum. Moreover, the opposition members got a number of government posts in Syria after the parliamentary elections held in May, 2012. It should be noted that the opposition in the country is run by the Istanbul-based Syrian National Council, an incoherent conglomerate of political groupings and hyperambitious individuals – from liberals to radicals such as the Kurdish separatists or the Muslim Brotherhood and Islamists who appear to be the council's best-organized faction. The opposition offers no program whatsoever and is united exclusively around the plan to ouster B. Assad at any cost, and objective which can only be achieved by force considering the extent of the popular support for the current president.

Sitting outside of Syria, the opposition leaders have long been inviting a military intervention against the country. In an attempt to forge an appropriate pretext, extremist groups linked to the opposition – the armed part of the Muslim Brotherhood, Islamists, and the so-called Free Syrian Army – launch terrorist attacks in Syria's cities and blame the bloodshed on the regime. The May, 2012 massacre in Houla, a town placed under opposition control in line with the Kofi Annan plan, was the bloodiest of the provocations and reportedly took the lives of over a hundred civilians loyal to B. Assad's administration. In the meantime, Ankara, the NATO countries, and the Gulf monarchies bombard the Syrian government with allegations of suppressing popular and absolutely peaceful protests and brace for a replay of the scenario which has materialized in Libya. The incident in which a Turkish reconnaissance aircraft probing into the Syrian air defense was downed highlighted the readiness of the informal anti-Syrian coalition to switch to military action.

Turkey is known to be in the process of amassing troops in the proximity of the Syrian border, and Damascus is left with no option but to respond accordingly. A military intervention in Syria and the overthrowing of B. Assad would leave Tehran short of a key political ally and make it a considerably less challenging decision to launch raids against the Iranian nuclear facilities, would likely put an end to the spread of the Iranian influence in Iraq, and would make it relatively easy to do away with Hezbollah in Lebanon and with Hamas in the Gaza Strip.

Moscow stands to loose from the regime change in Syria and even more so from the rise of Islamists to power in the country or from its being partitioned. The developments would give a boost to Muslim radicalism in the region bordering Russia, plus Syria's fairly impressive arsenals would partially end up in the hands of the Islamists and likely be used against Russia or CIS countries. Russia's potential economic damages should also be taken into account – under a similar scenario in Libya, those are known to have totaled $4b. The last but not the least, if B. Assad's regime falls Russia would have no partners left in the Middle East.

Actually, the possible demise of B. Assad's regime promises no gains to Europe either. The revolts triggered by the Arab Spring  and the NATO intervention in Libya sent over 30,000 immigrants, many of them illegals, to the European countries. The tabs eventually picked up by British and French taxpayers due to the anti-Libyan campaign measured Euro 340m and Euro 300m respectively, and it is clear that the cost in the case of Syria will be higher than the above.

Foreign ministers of the UN Security Council member-countries and their colleagues from Turkey, Kuwait, Iraq, and Qatar met in Geneva on June 30, 2012 to look for a solution to the Syrian crisis. However, Russia's suggestion to widen the attendance to  accommodate Iran and the Islamic Conference Organization was ignored and the impression was that the forum lacked inclusive character. Still, the document signed by all participants called for a transition process and a nationwide dialog in Syria. Kofi Annan voiced an idea of a transition council open to envoys of all parties to the Syrian conflict. Importantly, the meeting resolution contains no axiom that B. Assad must go and reaffirms that it is up to the citizens of Syria to compose the council or to lay out a transition timetable, though H. Clinton seized every opportunity to stress that Washington's position regarding B. Assad was not subject to adjustments.

On the eve of the Geneva meeting, Free Syrian Army representatives bluntly refused to comply with the terms of the Kofi Annan plan and announced a new armed opposition group – the Syria Rebel Army. Consequently, putting the meeting resolution to work is going to be an uphill task, though the very fact that it was penned by all the ministers attending should reinforce the legitimacy of Moscow's stance and enable Russia to demand that all signatories stick to the obligations assumed.

Moscow's position on the Syrian crisis as reiterated by the Russian president and foreign minister is that a military intervention in Syria is off the table and the crisis must be defused by dialog, which is something the Kofi Annan plan has serious chances to help achieve. If the position, shared by China, Iran, Belarus, BRICs, and an array of Arab and Latin American countries, translates into reality, the threat to the existence of Syria will be warded off and a death toll likely measuring tens of thousands will be avoided (over 50,000 people were killed in the military campaign in Libya). For Russia, asserting its position on Syria opens an opportunity to stage a comeback in the Middle East in the status of a great power - and to erase the illusion of sustainability of the unipolar world order.