Syrian doctors left, but promised to come back! 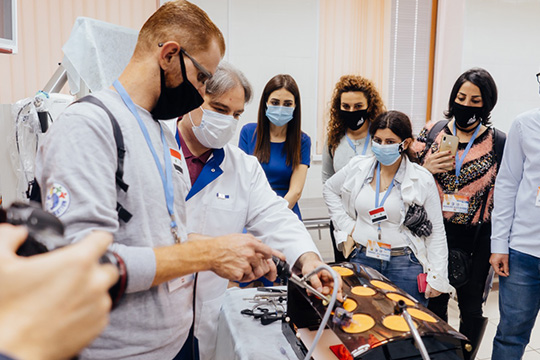 A unique forum “Medicine without Borders” was held in Moscow and St. Petersburg, organized by Rossotrudnichestvo with the support of the Russian-Syrian Business Council and the Embassy of the Syrian Arab Republic in Moscow.

Within the framework of the Forum, 25 epidemiologists, military doctors and medical workers of other specialties from Syria plunged into a rich business and cultural program from October 12 to 18.

At the welcoming meeting in the capital, Syrian doctors learnt about the activities of Rossotrudnichestvo, the prospects for the development of humanitarian projects and the agency's youth programs.

In Moscow, the Forum participants visited the All-Russian Student Rescue Corps, where they took part in a number of special trainings and seminars for doctors in military and epidemiological conditions, and also visited the legendary “Sechenovka” - the leading Russian medical university, where students from almost 100 countries study.

The head of Rossotrudnichestvo Yevgeny Primakov spoke about the exchange of experience between the doctors of Syria and Russia and the transfer of knowledge to Syrian colleagues at the official meeting, and Ambassador Extraordinary and Plenipotentiary of the Syrian Arab Republic to Russia Riad Haddad thanked the Agency for organizing such an important event.

Also in Moscow, the delegation talked with representatives of the legislative branch.  Deputy Chairman of the State Duma Peter Tolstoy and Chairman of the Committee on International Affairs Leonid Slutsky spoke about the long-term partnership of our countries and about the importance of stopping the spread of coronavirus infection. Parliamentarians expressed hope that vaccines developed by Russian scientists will be useful in Syria too.

The participants spent the next three days of the visit in St. Petersburg. The northern capital will be remembered for the Forum participants because the had rich business and cultural program.

First, the delegation of doctors met with representatives of medical institutions and public organizations of the city in the Committee on Science and Higher Education of St. Petersburg. Then the New Generation delegates visited the Institute of Oriental Manuscripts, where medical artifacts are kept.  In the Museum of the Military Medical Academy, they visited an exhibition dedicated to the development of military field medicine, and in Lenrezerv they saw a collection of cars and equipment from the times of the Great Patriotic War.

At the end of the forum, the participants got acquainted with the unforgettable sights of St. Petersburg: the Peter and Paul Fortress and Kronstadt, the canals and rivers of the northern capital.