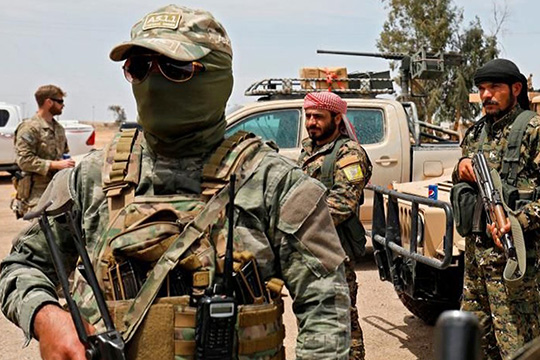 The recent turmoil over Idlib has pushed the developments in Syrian Kurdistan out of political and mass media spotlight. However, it’s Idlib that will most likely host the final act of the drama, which has become known as the “civil war in Syria”.

The self-proclaimed Democratic Federation of Northern Syria (DFNS), or Rojava, was formed in 2016, although de facto it has existed since 2012. Added later was the hydrocarbon-rich left bank of the Euphrates, which had been cleared of militants of ISIL (an organization banned in the Russian Federation), and now the jurisdiction of the unrecognized DFNS extends to almost a third of the country’s territory.

From the very start the main threat to the existence of this predominantly Kurdish quasi-state came for obvious reasons from Turkey, where Turkish Kurds were set on securing autonomy. In addition, the most influential political force in Rojava, the Democratic Union Party, is affiliated with the Kurdistan Workers' Party, and the latter has officially been declared a terrorist organization and unofficially – a number one enemy - in Turkey.

In January-March 2018, the Turkish army, backed by the Arab and Turkomanen allies, occupied part of the territory of Rojava (canton Afrin). And it looks like Ankara plans to settle on these territories: recently, Turkish President Recep Tayyip Erdogan reiterated that Afrin will be transferred to its residents “when the time comes” and that “this time will be set by us”. [i] In the meantime, according to local media reports, the demographic situation in the canton is changing rapidly. Taking advantage of the fact that many Kurds left their homes at the approach of the Turkish army, the local (in fact, Turkish) administration is bringing in Arabs here, who, in many cases, are not Syrian Arabs.

Kurdish politicians, fully aware of the fact that amid Turkey, Iran and Syria maintaining statehood without outside assistance is hardly possible, opted for the patronage of Washington. And, as it seems, they lost.

In Syria, the Americans decided to replay the “Kosovo scenario”, by turning part of a sovereign state into a political structure, which is allied to them. Washington, which only recently excluded the People’s Protection Units (the armed wing of the Democratic Forces), from the list of terrorist organizations, argues, like Ankara, that its military personnel will remain in the region “for an indefinite period” to protect Kurdish territories from “aggression” on the part of Damascus. And from Ankara's ambitions as well. But this is read between the lines.

All this enabled Turkey to accuse the United States of supporting terrorism and relations between the two countries quickly deteriorated into a crisis. As mutual accusations, occasionally supported by political and economic demarches, persist, the parties, however, are beginning to look for common ground. Talks on June 4, 2018 in Washington between Turkish Foreign Minister Mevlut Cavusoglu and US Secretary of State Michael Pompeo resulted in a “road map” for the withdrawal of Kurdish forces from predominantly Arab Manbij, which Kurds regained control of from ISIL (an organization banned in Russia) two years ago. The next day, the Turkish minister announced that the Kurdish troops "... would retreat east of the Euphrates. However, this does not mean that we will agree that they stay there. ”[Ii] On September 24, 2018, upon arriving at the UN General Assembly, Erdogan confirmed: Turkey will expand its sphere of influence in Syria, by including areas that are under control of the Kurdish armed units.

If Turkey does not change its rhetoric, then the assurances of the American authorities that the US troops will remain in Syria are intermingled with statements about the need for the withdrawal of its forces from this country. In any case, it is unlikely that the United States will choose to leave the region “to its own devices”. We can recall how Washington trumpeted the withdrawal of its troops from Afghanistan! But things haven’t budged an inch since then. The Afghanistan example demonstrates that the Americans will not move out of Syria that easily – they will not pull out in full, at least not of their own free will. US instructors and pilots will remain here "for an indefinite period." But who will they care of and support? Here are the options:

Firstly, it could be a hypothetical "Arab NATO" with Saudi Arabia in the lead. But there are serious doubts as to the effectiveness of such a structure - even if we forget about the level of combat readiness of these kinds of coalitions (in Yemen, for example), Arab countries could unite only on an anti-Israeli platform. And that, as history shows, is unlikely to yield success. In addition to this, it is still unclear how Kurds, the majority of whom are not religious, will react to Wahhabi commanders.

Secondly, the United States could choose to strengthen the Arab sector of the "Syrian Democratic Forces" (Rojava militia) at the expense of the Kurds. In mid-September, a number of media outlets, citing sources in the Syrian opposition, reported that Saudi emissaries had already suggested this option while meeting with leaders of the Arab tribes living east of the Euphrates. However, this development is also fraught with the Kurdish-Arab confrontation.

Thirdly, Washington persists in its attempts to improve relations with Turkey,  distancing it from Russia and Iran, and instruct it to “maintain order” in the region: the Americans did not intervene in the Operation Olive Branch and made concessions on Manbij. Even though this might seem strange amid the hostile American-Turkish rhetoric, military and political contacts between Washington and Ankara have been on the rise in recent months. Moreover, President Erdogan has already stated that he believes in an early improvement of relations with the United States despite the "inconsistency" and "economic aggression" of Washington.

Meanwhile, we need to remember that the US control over Kurds is far from unlimited. The “people's protection units” are ideologically close to the Kurdistan Workers' Party (or could even be seen as its “branch” in Syria), and the PKK itself, grown on the Marxist ideas, would normally support the Soviet Union and “by inertia” - Russia. For this reason, the Americans have to threaten the Kurdish allies with a cessation of military and financial support. Reports say the US and Turkish troops are already operating in the Manbij area, having dislodged the Kurdish YPG militia from the area.

These threats, along with the self-withdrawal of the United States during the capture of Afrin by Turkish troops, have made Kurds doubt the reliability of their patron. The result is a move towards rapprochement with Damascus. In late July, the Kurdish leadership announced an agreement with the Syrian authorities on the creation of a "road map" for the formation of a decentralized Syria.

The Americans are not sitting idle either, though it looks like they have no concrete plan of action. Such a conclusion comes from Donald Trump's somewhat incoherent answers to questions from a correspondent of the Kurdish media group Rudaw (09/27/2018):

Question: What are you planning to do for (Syrian - AI) Kurds?

Question: So what will you do to support them?

Answer: As I said, we will negotiate this, we have begun negotiations. The Kurds have helped us a lot to crush ISIS (an organization banned in the Russian Federation). [Iii]

Most likely, the hot phase of the protracted inter-Syrian conflict is nearing its end, and the preferences of the Kurds will determine the outcome of future elections, a referendum, or another form of will expression of the Syrian people, when the political situation allows it. Moscow has always called for involving Kurds in the negotiation process and on ensuring their full participation in the life of post-war Syria. “Russia insists that Kurds should participate in the process to determine the post-conflict future of Syria on a parity basis with other ethnic and religious groups of this country,” Foreign Minister Sergey Lavrov said in an interview with the Italian magazine Panorama. [Iv]

Until recently, Damascus did not particularly pedal negotiations with Rojava, but being aware that the capture of Afrin by Turkish troops was not in its interests, it has adjusted its approach to the self-proclaimed territorial entity. It looks like Syrian leaders have opted for softening their stance, which was previously set on the revival of the country on the basis of unitarism. Otherwise, an agreement with the Kurds will be nowhere in sight.