"Tales of Broca Street" played on the Arbat 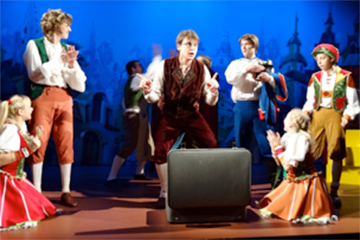 "Tales of Broca Street" by the French writer Pierre Gripari played for the first time at the Russian Theater in Geneva on September 11th and was produced in cooperation with students from the Theater department of the International Center of the Lomonosov Moscow State University (LMSU). This creative team will soon be the "backbone" of the Russian theater troupe, which will open in early October in the capital of Switzerland. So far on the on the walls of the Shchukin Theater Institute on Arbat the future actors bravely presented their play in the French language to a sophisticated Moscow public. No less brave were the spectators, whose knowledge of French was not very good, just a little, or even none at all, but who “got it in the morning”. However, it is true that there are no rules without exceptions – in this case the exceptions were represented by strict teachers who came to the premiere. They jealously watched the play in French, for pronunciation, intonation and speed of speech: everything was "rated." Even guests of the highest order were represented - the performance was watched with everybody else by State Secretary, Deputy Minister of Culture of the Government of the Russian Federation, Ivliev Georgi Petrovich, who wished the young team every success. But no matter how rigorous and exacting the judges were - the actors showed real THEATRE!

Just to mention, with what ardor the students acted out the play, about how one day the usual tranquility of a village was disturbed by a good wizard, tapping in the early morning in the window of the last house in the village, who offered to perform for them ... a fairy tale. The villagers who were accustomed to speaking in quiet voices and lived at a slow pace, were afraid at first, and looked towards their neighbor's house - a woman who was a strict keeper of peace and order. But the irresistible force of creativity that is in every man, took over. People are " broken down " into stereotypes: they have to fantasize, to play, and transform and after become astonished to find that a strict policeman may be a "sensitive and fearless prince," a flower girl, a beautiful mermaid, a siren, an unsympathetic hunchback, or a wise king, and a field of rye, through the power of imagination, can turn into an "endless blue sea" in just one moment. So how can one understand, that the role you play in society is not alien to oneself?

An hour before the start of the play, Tamerlan Hasanov, president of the LMSU, curled up on the interiors of the stage, and told TV reporters: " the team is unique, the guys can play in three languages : Russian, French and English . Things like that do not exist in the world of theater. Already on October 7th in Geneva, we are opening a Repertory Theatre, where this season four performances will be shown: Chekhov and Dostoevsky - in Russian, Maupassant and Gripari - in French." A minute before the curtain rose, he spoke with pride: "For the first time on the famous Shchukin stage, the granddaughter of the Vakhtangov Theater Academy, we will perform in the French language." Yevgeny Knyazev, Director of the Shchukin Theatrical Institute, People's Artist of the Russian Federation and the Dean of the Drama department at LMSU said: "Today we are playing the Moscow premiere of the "Russian Theatre in Geneva."

"Tales" on the Arbat on this evening was performed by: Veronica Agasarova, Evgeniya Jelieskina, Anton Zhorov, Alica Zamyatina, Denis Inozemtsev, Alexei Kokorin, Aksinya Oleinik, Daria Pisareva, Natasha Sanina, Andrei Sokolov, Alexander Sterelyugin, and Constantine Urbonas. The people who worked on the play were: director Valentin Stasiuk, a graduate of Shchukin Theatre Institute, who is now a teacher and actor, set design and costumes were created by Mariana Sychova, the music was written and composed by Julia Masalskaya, the actors were honed by Rushan Ixsanov, the dance routines by Annick Marechal, the lighting was designed by Alexander Matveev, and finally, Constantine Urbonas was in charge of adapting the translation.

An "Indicator" of the talent on set and the performance of the play was as always, the reaction of the young audience - natural and sincere in their emotions. During the play, the children were earnestly afraid of the hunchback with the hooked nose, but they "bloomed” when they saw the mermaid and happily sang along with the actors, who invited the audience to join in the choral performance. True people’s diplomacy took place that can sweep away all barriers "from one heart to another."

It is worth noting that 2014 is the Year of Russian Culture and will be perfectly named the Year of Russia in Switzerland, and Switzerland in Russia. In this sense, the International Center of the Moscow State University and the Russian Theater at the University in Geneva, will not only "pluck laurels ", but also work "up a sweat." What could be more desirable than to do what in a creative environment? While waiting to soon tour in the U.S. and for spectators from Russia, who knows when the Geneva Russians will once more bring their performance to Moscow, to tell their tales in French in the Old Arbat.