Tectonic shift in the Gulf: Arab states moving away from the US and towards China 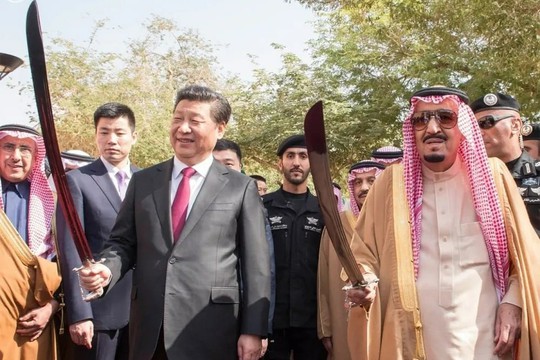 The capacity of the great powers to pursue their own agenda in the West Asian region is diminishing while the role of the leading regional states is increasing. In such situations, the prudent thing to do and the effective tactic to adopt for external players will be to refrain from trying to impose something. Russia and China have had remarkable success in this direction. On the contrary, the boorishness of the White House in snubbing the Saudi and Emirati rulers shows the US’ unwillingness or inability two adjust to the spirit of our times, notes prominent Indian international observer, Ambassador M.K. Bhadrakumar.

…The UAE and Saudi Arabian foreign ministries issued a joint statement, announcing ‘the success of the mediation led by UAE President Sheikh Mohamed bin Zayed Al Nahyan, and Saudi Crown Prince Mohammed bin Salman bin Abdulaziz for the release and exchange of two prisoners between the US and Russia’. The two Gulf Arab states said, ‘The success of the mediation efforts was a reflection of the mutual and solid friendship between their two countries and the US and Russia.’

Their statement highlighted the ‘important role played by the leaderships of the two brotherly countries in promoting dialogue between all parties.’ It concluded with the foreign ministries expressing ‘the gratitude of their respective governments to the governments of the US and Russia for their cooperation and response, and for the joint mediation efforts made by the leaderships of the two countries.’ No doubt, it was a proud moment for the Emirati and Saudi diplomacy that they mediated between two warring superpowers.

But it didn’t last for long.

Within hours, White House press secretary Karine Jean-Pierre tersely stated that ‘this negotiation was between the US government and Russia’. She refused to concede any role to Prince Salman, and insisted that ‘the only countries that actually negotiated this deal were the United States and Russia’.

On the contrary, the Kremlin thanked Saudi Arabia and the UAE for facilitating the high-profile prisoner swap. Spokesman Dmitri Peskov said, ‘We highly appreciate the role of the UAE and Saudi Arabia, which traditionally make a significant contribution to such processes.’

The Middle East Eye reported that Xi’s visit ‘will elevate these economic synergies to a new level and a possible free trade agreement, oil deals in yuan and membership of BRICS Plus would hugely strengthen Gulf-China ties and further challenge US hegemony.’

The view in the Gulf is that the US has grown increasingly distant as it switches focus to other regions — and that China is among those keenest to fill any gap. Saudi Arabia tops the list of destinations for announced Chinese foreign investment in the Gulf region over the past 20 years, totalling $106.5bn, ahead of Kuwait with $97.6bn and $46bn for the UAE, according to Janes IntelTrak data. Saudi Arabia is China’s largest supplier of crude and China is the kingdom’s largest trading partner.

The US has offered to work with Riyadh on 5G technology, but Saudi elites refuse to be the captives of western technology. US hackles have also been raised by speculation that Saudi Arabia could shift to settle its trade with China in renminbi. Saudi Arabia is only protecting its own interests and its future in a world order in transition by opting for a multifaceted set of relationships.

Another key lesson here is that in West Asia, the role of external players has sharply declined and the interaction of regional players is becoming the driving force.