Tensions in Bosnia and Herzegovina 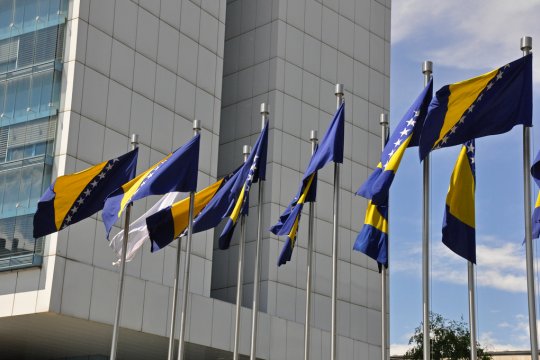 It has long been known that Bosnia and Herzegovina is a dysfunctional state, which survives only because it is a protectorate of the West. That is why discomfort has always been present since the end of the civil war in 1995. However, lately the tensions between the constituent nations in Bosnia and Herzegovina are getting stronger. The announcement by the Republika Srpska Police that will form a reserve police force, caused anger among the Bosniaks, who began to openly threat the Serbs.

The Party of democratic action (SDA), the strongest Bosniak party, warned the authorities of the Republika Srpska to be "aware of the consequences" of their announcement of forming a reserve force of the entity police and they called on them to suspend that process. As stated in the SDA statement, the introduction of a reserve force would violate the current balance in the number of police officers and negatively affect the overall security image in Bosnia and Herzegovina. The party stated that Serbs must be aware that, if Republika Srpska authorities insist on introducing a reserve police force, it will provoke a decisive and concrete response in the Federation of Bosnia and Herzegovina and its cantons, in the form of the introduction of reserve units and the acquisition of new police equipment.

"In doing so, they must take into account that the Federation has much higher financial and other capacities when it comes to the possible procurement of additional equipment and engagement of people for police forces. That's why it's best not to move into such a process at all. We urge the authorities of the Republika Srpska not to take any steps in that direction, because the incitement of any instability is not in the interest of any people and citizens in Bosnia and Herzegovina, but also in the region, " the SDA said in a statement.

Bosnia’s state-level government has not been formed for more than six months after the election, because the Bosniak member of the tripartite Presidency Šefik Dzaferovic from the Party for Democratic Action (SDA) said, he refuses to greenlight the proposed prime minister – in Bosnia called the Chairman of the Council of Ministers – because the candidate is opposed to the country’s path towards NATO membership. Bosnia has previously pursued NATO membership under strong pressure and threats from the West, but in recent years the Serb politicians managed to resist the pressure from the West, and the next candidate for the prime minister comes from Dodik’s party which vigorously rejects membership in the alliance.

Bosnian Serb leader Milorad Dodik, who now chairs Bosnia`s tripartite Presidency, said on Tuesday that the main Bosniak party in the country is blocking the forming of the Bosnia’s Government after October 2018 election, to protect the illegal production of arms in factories it controls.

On Tuesday, he said the party is controlling the illegal production of weapons and that he informed Serbian President Aleksandar Vucic about it. He alleged that lists are made of all Bosniak men capable of joining the military and that those are being profiled in the sense of where they were during the war. Those who have attended military training are being taken into consideration of how they can be prepared for some eventualities, he said.

Dodik noted that arms and ammunition factories in the Federation (FBIH), the semi-autonomous entity within the country mostly shared between Bosniaks and Croats, are directly under control by SDA and that they have  increased their uncontrolled production. He recalled the statement that one year ago, when Bosniak leader and SDA head Bakir Izetbegovic attended a ceremony which marked the 26th anniversary of the establishment of the Bosnian Army.

Izetbegovic then said that Bosnia will not waste its money on buying rocket systems and fighter planes but rather rely on its own armed industry which will produce for export but also for “just in case, God forbid”.

“Now their plan can be seen clearly. They want to keep the Serbs that suit them in the Council of Ministers so that their arms factories are permitted to work and their intelligence agency can continue to follow and control officials from Republika Srpska and Serbia without interference.” Dodik said, adding that it is something that needs to be resolved quickly.

Dodik added that the international community has destroyed all arms factories in Republika Srpska and left six such factories in Federation of Bosnia and Herzegovina.”Now we see that there is an illegal plan to produce arms and ammunition in factories, we are receiving information about this. We are asking for that information to be checked, whether it is true or not.”