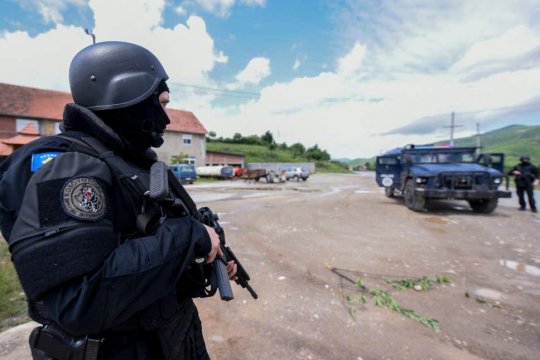 Police of self proclaimed state of Kosovo launched raids in the early hours of Tuesday morning in the Serbs-majority north of Kosovo, sparking an angry reaction from Serbs.

More than twenty people have been arrested so far. Among those arrested is the chief of police of the village of Zubin Potok. A Kosovo police officer was wounded by a gunshot during the operation, but is not in danger of losing life. Two other officers were also injured, according to doctors in North Mitrovica.

Kosovo Police said that in Zubin Potok(north Kosovo), barricades were set up and tyres set on fire to deter police officers. Kosovo police also stated that the operation was launched to detain suspects who have allegedly been participating in or organizing criminal groups and have been involved in the smuggling of goods, misuse of official positions, bribery and trading in contraband. According to information the operation has nothing to do with the murder of Enver Zymberi, a policeman who was killed in the north of Kosovo eight years ago, nor with the investigation into the death of Kosovo Serb politician Oliver Ivanovic, who was murdered in 2018.

The head of the Serbian government’s office for Kosovo, Marko Djuric, said on Tuesday morning that the goal was to cause fear and panic.

“This morning, around 6am, special units of the ROSU (Regional Operational Support Unit) stormed in from three directions into the north of Kosovo, into the territory of all four (Serb majority) municipalities, with the aim of intimidating and provoking panic”, Djuric told Tanjug agency. He said that “separatists from Pristina have reached for more terrifying methods to scare Serbs” and want to “create an impossible climate for Serbs in Kosovo”. Meanwhile, Serbian President Aleksandar Vucic and the Interior Ministry ordered the Serbian Army to be put on full combat readiness, Tanjug reported. Tanjug also reported that Vucic launched “intensive diplomatic activities” over the raids.

A Russian diplomat was also arrested. The Ministry of Foreign Affairs of Russia has stated that is unacceptable to arrest a Russia citizen in Kosovo, asking the UN mission in Kosovo for comprehensive information on his arrest and his release.

“The arrest was carried out regardless of the fact that Russian citizen has diplomatic immunity of UN staff. We consider this to be an unacceptable act as another manifestation of the provocation of the Kosovo-Albanian authorities, stated Maria Zakharova, the official spokesman of the Russian Ministry of Foreign Affairs.(1) The Russian diplomat was released after the protest of Russian Government. However, according to unconfirmed information, he was beaten by the Kosovo Police.

"We strongly condemn the incursion of Kosovo Special Forces in Kosovo-Serb-populated areas. This is extremely dangerous and it's not in line with all existing agreements, "said Chepurin on Twitter.(4)

The Serbian Armed Forces are in fully combat readiness, and according to the information, its movement under full military equipment was also observed. Serbian combat jet Mig 29 flies over an administrative line with Kosovo.

"If there is any threat to order and the life of people in northern Kosovo, our army will protect our people," stated Serbian president Aleksandar Vucic.(5)

Russia is monitoring the situation in Kosovo and is ready to provide support to Serbia. The arrest and beating of Russian citizen Mikhail Krasnoshchekov, which is a member of the United Nations Interim Administration Mission in Kosovo, is actually a message to Russia by the West. As stated by the official representative of the Russian Foreign Ministry, Maria Zakharova, the incursion of special forces is another provocation and the establishment of control over the region by force:

” It is clear that such defiant behavior of Kosovars is a direct consequence of many years indulging from EU and the Uited States”,- stated Maria Zakharova.

However, an important role also has Serbian president Aleksandar Vucic. At yesterday's session in the Serbian Parliament, the President of Serbia, as the basic message to the Serbian people, said that Serbia should accept independent Kosovo. In other words, Vucic is still fighting for demarcation, after which a small part of Kosovo would be left to Serbia. Otherwise, in his opinion, the Albanians will attack the Serbs in Kosovo. The defeatist attitude of the President of Serbia practically encouraged the Albanian separatists to take such a move which we can see today. It is precisely on the issue of Alexander Vucic's policy towards Kosovo that Russia should take a stronger position. The Russian Foreign Ministry regularly repeats that for Russia the solution of the Kosovo problem is UN Resolution 1244. And this is the correct policy, which is in line with the Russian and Serbian national interests. However, Aleksandar Vucic, contrary to the will of the citizens of Serbia is pursuing his policy towards Kosovo.