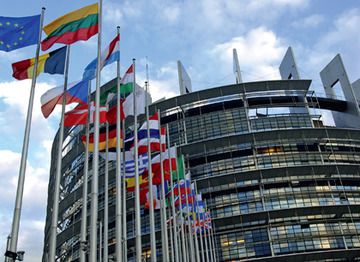 The situation is unfolding on the UN highest court`s verdict on Kosovo`s independence. Now that the legality of Kosovo`s 2008 declaration of independence from Serbia has been recognized, the West seems to be pushing forward its 'offensive' on the Bosnian Republika Srpska to achieve success on this stage of anti-Serbian strategy as well. Trying to prevent Bosnian Serbs from following Serbia`s plan of self-determination, the European Union (EU), with active support from Catherine Ashton, the First Vice-President of the European Commission and the High Representative for Foreign Affairs and Security Policy of the EU, worked out a plan of how to occupy Bosnia and Herzegovina, annul the 1995 Dayton Agreement and revise the UN mandate. The idea is that Baroness Ashton wants to have her envoy in Bosnia who would enjoy new powers going far beyond the already existing functions of the High Representative for Foreign Affairs in Bosnia and Herzegovina. Thus, a new envoy will be empowered to impose travel bans and asset freezes on those who would oppose reforms initiated by the EU.

The article in The Daily Telegraph headlined Baroness Ashton Moves To Take Control of Bosnia, the EU`s 27 member states have been presented with 'a confidential paper urging the creation of a powerful European envoy this autumn, based in Sarajevo. Lord Paddy Ashdown is seen as Mrs. Ashton`s favourite for the job supervising the Bosnia envoy. Ahsdown got a 'European Raj' nickname while serving as the international community`s OHR overseer of Bosnia between 2002 and 2006.

The main task of the new envoy will be 'to push through a new constitutional order for Bosnia and Herzegovina'. According to the paper, 'key to the political reforms, demanded as a condition of EU entry for Bosnia, is a strengthening of a multi-ethnic federal state, mainly controlled by Muslims and Croats, at the expense of Republika Srpska, the Bosnian Serb government'. 1 ''In the case of non-compliance... for example challenges to fundamentals of the Bosnia and Herzegovina state, the envoy will be able to recommend to the EU High Representative [Lady Ashton] that Council impose travel bans and/or the freezing of assets in the EU," said the paper seen by The Daily Telegraph.

In private talks with a correspondent, European diplomats confirmed that the new measures will be used first of all against Milorad Dodik, the elected Bosnian Serbprime minister, who backs independence from Bosnia, and who, in opinion of a senior EU diplomat, will have the rôle of 'unhappy bunny'.

It is notable that Bosnian Serbs and Dodik in particular are main obstructors to 'fundamentals of the Bosnia and Herzegovina state', known as the Dayton Peace Accords which proclaimed Republika Srpska as one of the two state entities. However, the issue in no way seems to bother Mrs. Ashton as well as other European officials, who are more concerned about putting an end to Serbia`s statehood.

A few days before 'a confidential paper' was presented by Mrs. Ashton, the leading newspaper in Sarajevo, Dnevni Avaz, published an article disclosing a true reason for Brussels to 'push through a new constitutional order in Banja-Luka'. Actually, the task is not to boost integration of Bosnia and Herzegovina into the EU, but to oppose Russia`s geopolitical expansion in the Balkans. Citing 'well-informed diplomatic sources', the paper says that Milorad Dodik 'had been instructed from Moscow to launch active counteraction to NATO`s expansion towards Bosnia and Herzegovina'. 2 Known for its pro-Muslim stance, Dnevni Avaz insists that Dodik allegedly has to 'pay for overwhelming support he receives from Moscow'. Obviously, these announcements are meant to justify the EU`s atempts to oust Dodik from the political scene.

Immediately after the article was released by The Daily Telegraph, Brussels hastily denied the leaked plan. Press-secretary for Catherine Ashton, Maja Kovacevic, said that her boss had 'no secret plan'. However, she added that the situation in Bosnia and Herzegovina really was on the agenda in a EU session in late July, and that 'the debates will be continued in autumn when the EU is scheduled to revise its foreign policies and discuss the creation of a new foreign policy apparatus known as the European External Action Service (EEAS)'.

The new diplomatic corps is expected to become the EU`s center and expand its functions far beyond its geographical zone of responsibility. The EEAS is due to start its work on 1 December, while the names of Brussels`s 30 special representatives in all major regions of the world- from Brazil to Afghanistan- will be announced in September. There is also a chance that the EU will have its headquarters in Macedonia, Moldova, in the Middle East and in Transcaucasia (where the EU envoy has to deal with the Nagorno-Karabakh conflict). Sources in Brussels emphasize that the final decision on the number of future missions will be made by Mrs. Ashton in autumn.

The only thing is obvious. If the EEAS sticks to the approaches recently outlined for the head of mission in Bosnia and Herzegovina, which run counter to the existing international accords, states` sovereignty and the UN mandate, new tendencies will bring changes to the world map, and Russia will in no way benefit from them.