The 100th anniversary of the legendary Alexander Marinesko 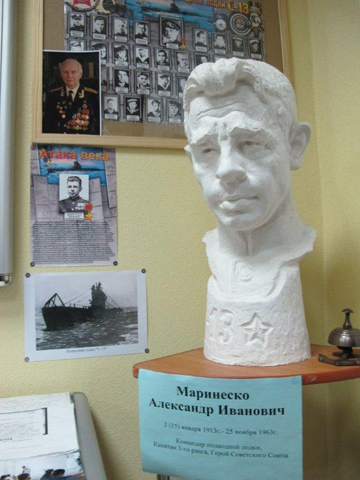 One of the highlights of 2013’s memorable dates was the 100th anniversary of the birth of Alexander Marinesko, the legendary commander of submarine "S-13.". How many submariners’ names are famous in naval world history? They can be counted on the fingers of one hand. And so for just the mention of a name to cause vivid historical associations, is perhaps even rarer. Historians and veterans, researchers and professionals remember of course the American submarine commander Joseph F. Enright of the submarine "Archer-fish", who sank the largest Japanese aircraft carrier the "Shinano" which had a displacement of about 70,000 tons.

The elusive, invincible, virtuoso Alexander Marinesko is remembered for torpedoing and sending to the bottom of the sea, the cruiser "MV Wilhelm Gustloff" with a displacement of 25,000 tons, and with senior commanders of the Wehrmacht on board. It happened on January 31st, 1945, and on February 20th the Swedish newspaper "Aftonbladet" first reported that on board the ship that was sunk were nine to ten thousand people, including 22 Gauleiter  of Polish lands and lands of East Prussia, 3,700 non-commissioned officers and 100 submarine commanders who had completed courses to command submarines designed for a complete blockade of England, as well as an SS support battalion of 300 men, officials, generals and senior officers who were subordinated directly to Himmler.

Moreover, the lead ship of the convoy was the armored heavy cruiser the "Admiral Hipper." With a deadweight of 13,900 tonnes, it was the most powerful German ship in the Baltic Sea, more powerful than any of the cruisers in the Baltic Fleet. The shell of each of the 8 major caliber guns it carried weighed more than 100 kilograms. After the daring attack the escort ships chased "S-13" for two days, dropping about 240 depth charges on it. But the "S-13" survived, and on February 9th, A. Marinesko sank the steamship "General Steuben" with a displacement of 14,660 tonnes. After the sinking of the "Steuben" whilst proceeding back to base, Alexander Marinesko’s submarine was subjected to an underwater attack by a German U-boat, which chased the "S-13" for six hours and fired eight torpedoes at her. On approaching base, A. Marinesko hid the "S-13" beneath the ice for more than three miles. The legendary crew of "S-13" returned back to their Baltic port base on February 15th, after more than a month of heroic combat operation in the stormy Baltic winter.

The number of sunken and disabled military ships accounted for by the “S-13" totaled 1/8 of the entire German Navy. His actions helped allow the UK, the "sea" ally of the USSR, to remain in the war. The British appreciated the contribution of A. Marinesko in the saving of its own fleet: that is why Her Majesty’s Royal Navy decided to erect a bronze bust of him in Portsmouth, after they recovered from their wounds of World War II. Portsmouth means to the UK, the same as Kronstadt and Sevastopol do to Russia.

So what was Alexander Marinesko’s secret? How did it happen that the German U-boat aces could not beat him? This was discussed at red carpet receptions and meetings arranged in several Russian cities: Moscow, St. Petersburg, Odessa, Kaliningrad and Kronstadt in memory of the great fellow countryman, submariner, and Captain Third rank Alexander Marinesko. In the capital, a festival was inaugurated and held by the Sailors Union supported by the "Russian Military Center" and many community organizations. The Andrei Bogolyubsky Fund presented a documentary movie "Attack of the century. The Last Hero. "

The title of the film refers to one of the major milestones in the life of Alexander Marinesko, Hero of the Soviet Union. Included in the film and talking about them, was an eyewitness, a veteran of the Navy, a veteran of World War II, and one of the crew of the famous submarine "S-13,” Stanislav Zvezdov. He knew and appreciated the exceptional quality of his military commander, and was under his command for more than one trip to the Baltic Sea.

Alexander Marinesko became a living legend. That's what Stanislav Zvezdov, who served on submarine "S-13” as a hydrophone operator, told a correspondent on "International Affairs" magazine. "Alexander Marinesko was brilliant, phenomenal, technically competent, and was a good sensitive teacher. He could forgive a violation of dress code, but required of his crew a flawless knowledge of their profession, and brought it to perfection. It is known that the largest proportion of accidents in the sea is in the submarine fleet. How terrible is an accident on board a submarine? If there is a hole, the waters enter the body of the ship, and the lights go out. In the deep darkness it is impossible to turn on the pump if you do not know "perfectly" where it is. The commander understood this and gave great importance to such knowledge.

He was a democratic commander, never scolded, and he knew how to listen. He was loved by his crew, and by the commanders of the other crews. He was born a sailor, by the way, in the seaside city of Odessa. Mediocre coworkers were annoyed by Marinesko’s independence and self reliance. Being highly professional, he was always ready to defend his own opinions, and argue for them. He was determined, boldly making extraordinary decisions and able to stand for them. In taking a colossal risk, A. Marinesko was able to calculate everything in a split second. "

One example is from Stanislav Zvezdov’s story. After receiving orders to destroy Soviet submarine "S-13", German submarines fired 14 torpedoes and 14 times, thanks to the commander’s animal instinct and the skill of his crew, the boat dodged the enemy. "It was a war of nerves.” We made it clear to the enemy that we did not know where he was, so a true German ace came to “hunt” us. He crept up on us like a cat, but hearing the movement of their propeller, our crew realized that a submarine had stolen up on us, and four torpedoes fired at "S-13 "swept past us" said Stanislav Zvezdov. There was another extraordinary event in the campaign. "The Commander is asleep, leaning against the wall of the center compartment. Suddenly he jumps up and yells, "Hard a-port!" And what happens next? - We hear screeching torpedoes. Alexander Ivanovich Marinesko was not only a highly professional virtuoso, but also was a man of remarkable qualities. Fair and balanced when communicating with the crew and co-workers, literate, clever, strong, fearless, he never talked down to the lowest in rank, he was always, without exception, democratic ", said Stanislav Zvezdov.

He became a folk hero, regardless of honors and awards. It is due to the people's efforts, the efforts of honest seamen, and co-workers, in whom he lit the spirit of love for his demanding profession, and motivated by a sincere love for his personality that he was eventually rewarded with the title of Hero of the Soviet Union. The decree awarding him the title was not signed in 1945, but posthumously in ... 1990. So Alexander Marinesko became the last hero. In one of the films about him, there is a story: a submarine firing a torpedo at a target inevitably pops up to the surface and becomes vulnerable to any opponent. This is similar to the destiny of Alexander Marinesko, akin to his submarine heart, his skin, his whole being. He served at the limit of human capabilities, in his element, he was invincible.