The Annual India-Russia Summit: The two countries message to the World 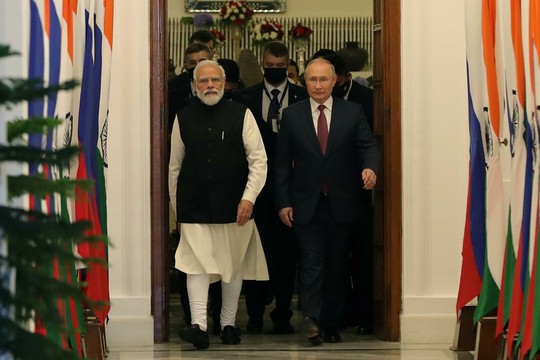 Previously after India had joined the QUAD, diplomatic rumours around India-Russia relations started to brew. During the raging COVID-19 pandemic, the Annual Summit stood cancelled and thus an evaluation on the world’s most natural allies were questioned. India and Russia’s cordial relations have stood through time and changing governments, which makes it a unique case to study bilateralism in a much-globalized world. As Russian President Vladimir Putin sets afoot in India to meet his Indian counterpart Narendra Modi, it's time that both the countries evaluate and re-evaluate their foreign policies especially the ones which had forged new alliances.

Russia has never openly spoken against or for India’s strategic alliance with the West. The former Trump and the incumbent Biden administrations have stepped up their Indo-Pacific policies which go through India. Given these strategic alliances, India has been able to manoeuvre itself into establishing a detrimental role for geopolitics and regionalism. India-Russia Annual Summit has the attention now given that this natural bilateralism has a lot to offer not only to the dynamic regionalism but at large to the global affairs. The awaited summit could be seen as an effort for the revival of fresh policy between India and Russia which will not upset any of its present and future alliances and cooperations.

The Summit has the highest possibility to turn things around in Asia, especially with the case of Afghanistan. India has time and again reiterated its policies towards the nation and the people of Afghanistan and thus with organizations like the BRICS and SCO, Moscow and New Delhi can recover the lost soil. Similarly, Indian Foreign Secretary Harsh Vardhan Shringla mentioned the numerous trade and defence pacts that were signed during President Putin’s visit to India. The trade and defence between India and Russia are crucial especially with the supply of the S400 air missiles system. Apart from the usual handshakes and flashy pictures, an oil deal worth 2 million tonnes had been signed between Russia’s Rosneft and India’s Indian Oil. Trade and defence continued to be the highlight between the two countries and it has been able to sustain itself amidst clashes and autonomy.

Why President Putin’s visit to India is significant?

In recent years, India has emerged as one of the largest defence consumers. Despite the budding indigenous defence industry and an era of start-ups, India is still majorly dependent on Russia for its defence needs. An estimate says India’s 60-70 percent of defence requirements are fulfilled by Russia. And to secure a reliable supply for its need, India’s Russia policy has always been a priority.

Kremlin too sees this as a reliable option as compared to other big buyers as China.

For obvious reasons QUAD tends to become an irritant in India-Russia ties, however, India’s act of balance minimised the impact. With a similar pattern of 2+2 dialogues, New Delhi has included Kremlin for its crucial defence and foreign policy outreach. Given the sphere of dialogue, both countries have signed numerous agreements Agreement including the Program of the Military-Technical Cooperation from 2021-2031. This 10-year defence cooperation programme outlines the ongoing defence cooperation and future possible cooperation between the two countries.

Another significant development includes the development on the S400 purchase by India. Russian S-400 advanced missile, likely to help India tackle air threats from up to 400 km. Which is it dire requirement given tensions on its western and northern fronts with Pakistan and China respectively. The long-range S-400 ground-to-air missile defence system is one of the most high-profile current contracts between two nations and have recently been in talks among policymakers at Washington and Beijing.

Another significant development is the cooperation agreement between the Reserve Bank of India and the Bank of Russia in the field of responding to cyber attacks. Cyberspace is one of the overlapping points for both India and Russia and this agreement is expected to strengthen India’s priorities in the right direction.