The Arab Revolutions: a Preliminary Assessment 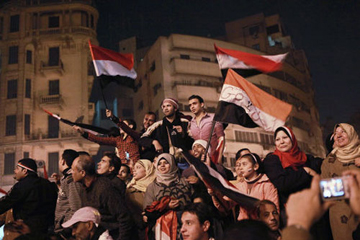 The situation in Libya is evidently headed for a quagmire.  At the moment, the vision of the situation should not be limited to the viewpoint of the Western coalition's member countries (which remain divided over quite a few key issues and whose governments will yet endure fiery criticism over the campaign from their respective constituencies) but should encompass the wider context of the post-revolutionary Arab world.

Politics, as Otto von Bismarck wisely remarked,  is the art of the possible, and the West has days rather than weeks or months to put its designs concerning Libya into practice. In contrast to former metropolises — Great Britain and France — which seem oblivious to their past historical failures, the US tends to pursue extremely far-reaching objectives and currently has to sustain parallel emergency missions in several parts of the world. Experts in Egypt are reportedly convinced that, regardless of how the White House feels about the regime in Libya, the Gadhafi problem is not at the top of Washington's agenda. Rather, the US should be worried about the developments in the strategic and oil-rich Bahrain where the Shia majority is increasingly mindful of its rights, and about the situation in Yemen, the country where considerable destabilization would translate into an immediate threat to the domestic security of  Saudi Arabia, the world's main oil supplier and the West's strategic ally.

It is understood in the US better than in other coalition countries that the Muslim radical groups with their uncompromising leaders fully dedicated to the Islamic project have serious chances to emerge as the beneficiaries of the turmoil in the Arab East. Besides, Washington likely takes into account the fact that the unrest in the Arab world can boost the process of veiled proliferation of weapons of mass destruction. The regards explain the discord in the ranks of the US establishment over methods and forms of countering the increasingly assertive Islamism. At the same time, less important circumstances also factor into the US reckoning. For example, several commentators voiced a hypothesis that the reason behind the hyperactive approach to Libya's case adopted by US Secretary of State H. Clinton and Senator J. Kerry who lost the presidential race in 2004 is their hope to capitalize on helping Israel break out of political isolation and on this basis to jointly stake a bid for presidency in 2012.

No doubt, Russia is interested in grasping the causes and implications of the Arab world's ongoing upheaval, among other reasons due to the fact that the patterns set by Arab nations can in various ways bear a mobilizing effect across the post-Soviet space.

1. In my opinion, the factors responsible for the outbreak of mass protests in the Arab world include:

The crisis of the development model which denies the majority of the population access to the benefits of economic growth. Strictly speaking, the Arab countries which recently came into the spotlight failed to parlay economic growth into development which normally combines  economic achievements with widening employment opportunities and a more or less uniform distribution of the benefits of economic progress across the society.

A fairly high degree of openness to socioeconomic and institutional change within Arab societies. The readiness to embrace change manifested itself in the Arab street's calls for the ouster of various «Pharaohs» and senior-aged rulers whose terms in office were supposed to last indefinitely.

External influences which also contributed to the developments in Algeria, Tunisia, Egypt, etc, highlighting the vulnerabilities of the regimes which proved unable to ensure acceptable employment levels for the young, tolerable food prices, the legitimacy of election outcomes (as in Egypt) and to integrate the oppositions into governance (as in Tunisia and partially in Yemen).

The educated strata took the biggest roles in the mass protests against the regimes which recently shook a number of Arab countries. The educated communities in them do not appear to be organizationally structured but are markedly active in the realm of politics. The percentages of young people are high in most Arab societies, while the Arab youths typically find themselves disadvantaged economically and politically. The protest agendas varied widely in terms of their political depth, ranging from mere calls for a country leader to step down to demands for serious reforms. In the foreseeable future, the regimes in Arab countries will have to built elements of development-oriented populism into their policies and accordingly to tame the appetites of the upper classes. Just as clearly, the leaders in Arab countries are fully aware that the resources they can divert to meet the protesters' demands are severely limited. From the structural standpoint, unchecked population growth (the population in Egypt nearly doubled over the period of H. Mubarak's rule) and lack of modern political institutions (in Algeria, Yemen, and Libya) should be attributed to poor governance.

The potential scenarios for the Arab world's future largely reflect the ability of the corresponding societies to sustain new political configurations. As of today, the menu of promising political models for the Arab world includes the neoliberal democracy (in Egypt, Tunisia, and Bahrain), «collective authoritarianism» based on a historical compromise (in Yemen), and consensus between tribes (in Libya, unless the country eventually falls apart). At the same time, it will depend on the Arab street's ability to stay united how meaningful the socioeconomic change currently on the horizon in the Arab countries will be.

No doubt, the current transformations in Arab countries will affect their international policies and the overall balance of forces in the Middle East. First, the reasonable expectation is that the region's countries will shed much of their influence internationally. Secondly, the prospects faced by some «oil monarchies» tightly linked to the West are as of today unclear. The question arising naturally in the context is whether the regimes run by senior-aged leaders with decades of rule on their records are able to preemptively launch the long-overdue socioeconomic reforms? Otherwise formulated, the same question reads: is it possible to implement the power transfer to a younger generation of rulers within the «oil monarchies» without their societies being plunged into chaos or falling prey to radical Muslim groups? Thirdly, the formation of a zone controlled by the forces of politicized Islam and spanning from Mauritania to Sudan is also a possibility that cannot be discounted considering that in some of North African countries - in Libya, Mauritania, and Algeria - the administrations exercise practically no control over large chunks of their territories. Bangladesh, the country turned hotbed of international terrorism, may not be the last case of the kind. If such a «strategic project» materializes, the geopolitical repercussions will spread far beyond regional confines, Arab societies along with the West will have to boost their efforts aimed at curbing the power of politicized Islam, and the pressure exerted on the post-Soviet space by radical Muslim groups will drop as they switch to securing control over «their own» territories. Fourthly, the secular character of the recent Arab revolutions may come as a lesson to the post-Soviet and perhaps even Transcaucasian republics where economic success stories and viable institutional landscapes are still missing after two decades of independence.

As for Russia, the tide of Arab revolutions will surely prompt it to subject the very process of foreign-politics decision-making to a profound overhaul, thoroughly incorporating the experience of the Russian Empire's and Soviet Union's diplomacy into present-day practices being a necessary part of the adaptation. On top of that, Russia's international policies will evidently have to be carefully synchronized with the rise of conservative public attitudes within Russia.