«The Arab Spring: scenarios for the future» 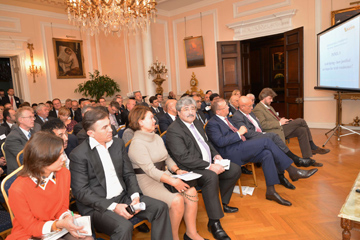 "International Affairs" magazine, with the support of the Embassy of the Russian Federation in London, hosted an international conference on "The Arab Spring: scenarios for the future."

Before the conference began, the Russian Ambassador to the UK, Alexander Yakovenko, welcomed the participants and read out a letter from the Russian Minister of Foreign Affairs Sergei Lavrov, who in his address, noted the importance of the topics at the conference, emphasizing that "the regions of the Middle East and North Africa, which have entered a period of turbulence, are justifiably taking priority on the international agenda."

The conference was opened by the editor in chief of "International Affairs" magazine, Armen Oganesyan, who addressed the audience with a welcome speech and also talked about the long history of the prestigious magazine, which was formed in a complex historical context. “International Affairs" magazine started its work in 1922, and immediately became a kind of platform for the discussion and understanding of those challenging times and the events of the early 20th century. Still existing today, the magazine continues to provide a comprehensive objective analysis of international relations and global politics. Mr. Armen Oganesyan also noted some similarities between the present time and those times. Today the world community exists in a no less complex time of crisis, and also needs to jointly address the inevitable issues and problems that must be built on mutual respect.

The speakers, continuing the Editor in Chief’s thoughts, also noted that the problems in the region have ceased to be local and therefore are especially in need of the consideration and understanding of the global community. The participants in the conference talked a lot about the causes and preconditions of the "Arab Spring", and on the factors that influenced the escalation of the already difficult situation in the Arab East.

It is also important to note that these dramatic events are far from over. The phenomenon known as the "Arab Spring" includes a whole set of factors, circumstances and consequences, from the economic to the civilization and geopolitical spheres, so it is important to realize what is happening and to try to find a way to stabilize the situation.

The participants in the discussion also talked about the fact that the future of the Middle East was being decided in an ongoing state of conflict. In this case, all the societies in the world should only interfere in the internal processes in the region with the greatest of care. The intervention of "external values" can lead to a deterioration in the situation. In the context of the dialogue of cultures and civilizations one must learn mutual respect. This was highlighted in particular, when closing the work of the conference, by Mr. Armen Oganesyan. After all, the era of postmodernism and its culture, without the traditional values of European culture, leads to a sharp conflict with Islam, which rejects this second wave of aggressive secularism at the global level. The popularity of liberal values in relation to events in the world stands in doubt. Some of the participants particularly noted the need to give up the belief that the democratic regime is the only way for the State to exist. The world community must exist in the framework of international law, which allows each country and each state, to independently form their own future, keeping their traditions.