The Arabian Revolutions and Central Asia 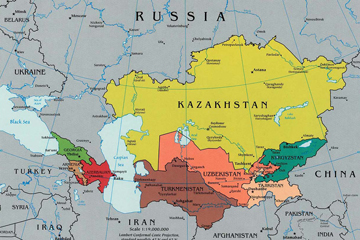 A wave of anti-government protests in the Arab world has made us think about whether such events are possible in other parts of the planet. Then Central Asia comes to mind immediately as a region which has much in common with the Arab civilization. The leaders of Central Asian regions do not seem to rule out the possibility of social unrest among their people. Any kind of information about the ongoing crisis in the Arab world receives poor coverage in the local media and is always censored. For example, in Turkmenistan there has been hardly any report in papers or on TV about the protests in the Middle East. The Uzbek media pay very little attention to this issue either, and if they have to (for some reason) they never compare the situation with that in Central Asia (I mean presidents-for-life, corruption, economic hardships).

The governments in Central Asia have taken urgent measures to prevent a rise in food prices so that people had no grounds for outrage. In Tajikistan they decided to put a share of the strategic food reserve on sale in order to send food prices down. Flour prices in the Republic increased almost by 80% last year, while tea, sugar and milk prices grew by one quarter. A new surge in prices was registered last month following a growth in flour prices in neighboring Kazakhstan. High flour prices is a serious problem for Tajik families with many children, where homemade bread is the core of daily menu.

There is also a surge in prices for feed grain, which sends the cost of diary and meat products up as well. Practically all products Tajikistan imports from abroad, which does not allow to develop the mechanism of price regulation at home. This all means that the majority of Tajik population may face a serious food shortage. To keep up the prices the government decided to put flour, rice and sugar reserves on sale every week. However, it is yet unclear whether this will help in the regulation of home market. But if the prices are not kept up, people with low income will turn out to have consumed all seeds required for spring sowing.

The situation is much alike in Kazakhstan, although living standards are much higher there, and the Kazakh government has a wider range of possibilities to influence consuming market at home. Food prices in Kazakhstan have also grown much since the beginning of the year. According to the state statistics agency, a 3% rise was registered in January. But if we analyze the dynamics of the most frequently consumed products, we`ll see that prices for many of them have gone up by tens of percent. The authorities have resorted to all mechanisms of price regulation, including direct food supplies to various retail outlets and anti-monopoly surveys, but these measures have not proved very effective. But it is especially important to keep up prices ahead of the early presidential elections in Kazakhstan scheduled for the 3d of April.

But protests are already in the air in some districts of Central Asia. Tajik people staged several rallies demanding the authorities to handle the most pressing issues immediately. 140 residents of the village of Chimkurgan in Sogdyi area came to the local administration building protesting against poor housing policy and little effort to prevent a surge in prices for essential goods.  Fifty elderly people gathered in Rudakyi area demanding their pensions paid off which they had not received since last October. Workers at 'Hydrostroy' who were involved in the construction of the Sangtuda-1 hydro power plant demanded that the authorities paid off their wages (the total sum of the debt was $1.4 mln). Of course, these gatherings do not look as violent as those in the Arab countries but still this indicates that social problems are also very acute in Central Asia.

There is no tradition of public protests in Central Asian republics, probably except for Kyrgyzstan. However, the memory of fights with Islamist opposition is still alive in people of Tajikistan and Uzbekistan. The 1992-1997 civil war in Tajikistan and the 2005 Andijan uprising are the events that come up to mind at once. Kyrgyzstan is notorious for its outbreaks of ethnic violence.

Since Kazakhstan and Turkmenistan see a stable inflow of oil-and-gas money into their budgets, the local governments could improve the living standards by introducing some programs aimed to increase pension payments and unemployment benefits. But the situation is much more difficult in Tajikistan, Kyrgyzstan and Uzbekistan: in the worst-case scenario, mass violent protests like in Tunisia and in Libya are very likely there. Kyrgyzstan now lives in anticipation of spring escalation of tensions, and this time things may go much worse, with the country splitting into north south for ever. New militant gangs emerge in Tajikistan – like it was during the civil war. In the meantime, the situation seems to be stable in Uzbekistan where reprisals against any form of opposition are strong, but who knows what will happen there in case of power shift.

Taking into account geographical location of Afghanistan, Pakistan, the Xinjiang autonomous district of China and other hotbeds of instability, as well as geopolitics of the Central Asian region which has common borders with Russia, China, India and Iran, the consequences of possible unrest will do the former Soviet republics more harm than to Libya.