The Arrest of R. Mladic From the Perspective of International Law 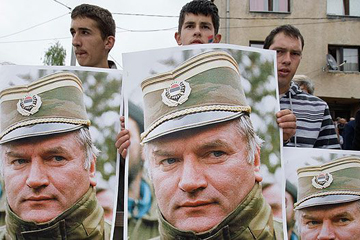 The May 26 arrest of former Serbian military leader Gen. R. Mladic evokes serious questions of both moral and legal character. Clearly aware of the shakiness of the indictment Mladic is about to face, the global media tend to avoid touching upon the legal aspect of the Mladic case.

It is an open secret that arresting Mladic and handing him over to the Hague Tribunal was set by the West as a part of the price Belgrade was supposed to pay for the entry ticket to the EU. It is less known that permanent pressure on Serbia over the matter was also linked to legal requirements defying which could earn the country problems much more serious than being shut out of the EU. In February, 2007, the UN International Court of Justice passed a resolution charging Serbia with violating the 1948 Convention on the Prevention and Punishment of the Crime of Genocide. One of the  articles of the resolution stated that Serbia breached the conventions by not extraditing Mladic. With the predictable exception of the Serbian judge, all judges of the Court — including the Russian one, oddly enough  - voted in favor of the Article. The resolution was essentially irrational as Mladic's whereabouts were unknown at the time and therefore Serbia likely could not dish him out regardless of its actual intentions, while the Court had no evidence at its disposal that Mladic was in Serbia. Yet, sanctions may be slapped on a country for failure to comply with the UN Court of Justice's demands, and Belgrade had to be mindful of the possibility ever since.

In a stark breach of the key norms of the international law, the Hague Tribunal indicted Mladic in absentia back in July, 1996. Article 61 defining an ICTY Procedure affords a bizarre approach to issuing international arrest warrants, with the indictment being heard without the indicted person's or his defender's being present. Formally, a «defender» - one appointed by the court, not chosen by the defendant - does take part in the hearing process. In July, 1996, the Hague Tribunal ruled that there was enough evidence to consider R. Karadzic  and R. Mladic guilty of gross international crimes. Subsequently the special procedure helped the ICTY use Mladic's name to «prove» the guilt of a number of other accused.

At the early phase of the existence of the Hague Tribunal, it adopted the legal concept of a criminal enterprise. The judicial innovation paved way to serial indictments of Serbs and was evidently invented to enable sentencing people whose personal involvement in (or even having been informed about) the acts they were charged with could not be proven.

The first version of the indictment against Mladic was endorsed already in 1995. Curiously, the judge who penned it — F. Riad, a Muslim from Egypt — was biased to the point of making the indictment heavier than originally requested by the prosecutor. An in-depth comparison between the indictment put together by the prosecution and the one amended by the judge  highlights F. Riad's creative approach to the case. For example, he inserted a passage explaining that captives were executed in small groups, which — as opposed to a single mass execution — was to demonstrate that the massacre was not spontaneous but carefully planned. To the same end, F. Riad also showed a longer period of time over which the executions continued than did the prosecution in its original indictment.

The indictment against Mladic endured several amendments. In the beginning, Mladic's indictment was bracketed with the one against Karadzic, but was detached from it when Karadzic was taken into custody in 2009. The last substantial changes in the indictment against Mladic were supposed to date back to 2002, but further details surfaced recently. Evidently, the text was subjected to a fairly radical facelift … on May 10, coincidentally, a couple of weeks prior to the apprehension of Mladic. The edited indictment was confirmed by Alfons Ori from the Netherlands, the same judge who signed the 2002 indictment against Mladic. Ori has a record of being tough on Serbs and  of paralelly acquitting Albanians with Serbs’ blood on their hands. He handed out sentences to quite a few Serb, mostly from Bosnia, including former speaker of National Assembly of the Republika Srpska M. Krajisnik and cleared R. Haradinaj, a notorious Albanian butcher. No doubt, those who want Mladic convicted can rely on Ori to do the job.

The key change is that now Mladic is charged with four criminal enterprises instead of one. The first one is linked to the ethnic cleansing campaign against Croats and Muslims in Bosnia, which was qualified as genocide by the court. Other enterprises are associated with terror against civilians in Sarajevo, taking UN personnel hostages in May-June, 1995, and the July, 1995 Srebrenica «genocide». The latest indictments carries 11 counts of genocide, crimes against humanity, and violations of the laws and customs of war.

What scrutiny reveals is that the indictment lacks elementary coherence. For example, Mladic is accused of occupying Srebrenica and killing its civilians, but, judging by the alleged dates of the beginning and the end of the siege — from July 2 till July 11 -  taking the small place somehow took 10 days. The only plausible explanation is that Srebrenica had to be a heavily fortified bastion putting up staunch resistance, which renders it unfair to count the fatalities as civilian. The fact is in some form admitted in the indictment, but all those killed during the seizure of Srebrenica are nevertheless listed as civilians by the Hague Tribunal. In this light, frequent references to «Muslim boys and men» in the indictment may only be seen as an attempt to overstate the civilian theme, and the indictment as a whole clearly cannot be trusted.

Strictly speaking, even the indictment as it is contains information that Mladic acted in line with the humanitarian law applicable to armed conflicts. For example, removing the population from the combat zone should be regarded as compliance with the Geneva Conventions on the Protection of Victims of (Article 50) and Protocol II Relating to the Protection of Victims of Non-International Armed Conflicts (Article 17) rather than as a crime against civilians.

The situation with figures looks no better. The 8,000 death toll recurs in former ICTY chief prosecutor Carla del Ponte's memoirs, though she is the one sure to know that the number in the indictment is 7,000. The media similarly keep mentioning the 8,000 killed in Srebrenica. Suspiciously, the figure has a tendency to grow as time goes by, even though there is a swelling bulk of evidence that from the outset the numbers had nothing to do with reality. Whenever new burial sites are discovered, the bodies in them are those of combatants, the relevant circumstance, by the way, being that Muslims were the side which unleashed the war.

L. Simic who studied the corpses unearthed in Srebrenica presented convincing evidence to a conference on the ICTY organized by the Russian Academy of Science that all those buried — at most 1,500 people - were combatants, not civilians. At the same conference, Zh. Civikov, a scholar from Bulgaria, presented an extensive analysis of the Court's evidence in the Srebrenica case. His 2010 book The Key Witness vividly exposed the ICTY forgeries concerning the alleged Srebrenica genocide.

There is further evidence that the charges massively brought up against Bosnia's Serbs are based on total lies. Due to obvious reasons, some of the European countries maintain legislation explicitly outlawing any arguments against facts of genocide recognized by the UN International Court, even if evidence to support the arguments is available. The range of punishments for the offense includes imprisonment, while the evidence is to be brushed off without deliberation.

As for the indictment against Mladic — it is an absolutely slanderous and unprofessionally written document.