The Battle of Borodino 1812 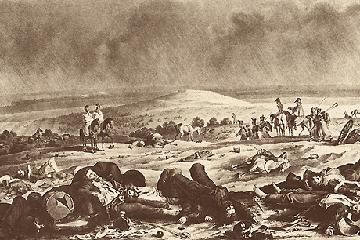 The bi-centenial of the Battle of Borodino, which along with the great Patriotic War of 1941 to 1945, is one of the two great features of modern Russia’s historical identity, has prompted an understandable frisson of patriotic pride in the Russian nation.

It is well deserved.

The scholarly research of Dominic Lieven has shown us that Russia’s over- arching aim in chasing Napoleon all the way back to Paris was to establish peace in Europe. Alexander knew that as long as Napoleon was free, Europe was under permanent threat. In this, Castlereagh, the British Foreign Secretary, normally takes all the credit. But then, western scholars have a long tradition of ignoring the facts of Russia’s role in obtaining and maintaining the peace of Europe.

Witness the extraordinary ignorance among westerners of the unimaginable numbers of Russian losses in the Second World War, or the contribution of Zhukov to the defeat of the Nazi scourge.

Be proud, Russia, of your past, of the people who lived where you live today, and who spoke your language. (And some French and German, but nations then were new and uncertain forms.)

When the Russian army marched across Europe to Paris in 1813 and 1814, it was hailed in many places as an army of liberation, releasing people from the exactions of Napoleon, an end to constant war and the restoration of trade and prosperity.

Be proud of this and be happy that Dominic Lieven, himself an American, also destroys the somewhat patronising argument of many western scholars that it was Bonaparte’s miscalculations and the unusual weather that were decisive.

Neither was it, he shows, as earlier scholars such as the British military historian JFC Fuller have maintained, and even Tolstoy, only a matter of the raw spirit and courage of Russian troops inspiring the nations under the French heel to rise up against their oppressors.

Nor was it mostly that the flames of Moscow’s fires spat the sparks that set the flames of nationalism under Napoleon’s combustible empire and burnt it to the ground.

No, these may have played a part in the drama, but they were not the leading player.

Centre stage was the Tsarist state itself, with Alexander and his aristocratic circle in full support.

The Tsar possessed strategic understanding, and the resources of the nation were husbanded and marshalled according to this understanding : military flair: flexible and fast moving cavalry; logistics; intelligence and diplomatic competence, all combined to produce the unconditional surrender of the egotistical maniac that had stolen his country from the revolution of 1789 – Bonaparte, the arch opportunist, the archetype of a tyrant intoxicated by power, a man who bragged that he cared not a jot for the lives of a million men.

This analysis did not find favour with the Bolshevik regime, of course. The special spirit and courage of the proletariat and peasantry do not figure in it sufficiently as the crucial elements.

But as Lieven points out, there are only two memoirs from the ordinary soldiers of the Campaign of 1812 – 1814. We really have no idea of the spirit or suffering of the masses of Russian or other troops. This was largely, for most of the Russian peasantry that made up the cannon fodder at the Tsar’s disposal, a silent sacrifice as far as posterity was concerned.

This reminder of the unknown soldiers of world history prompts me though, to ask you, proud Russians, to moderate the celebrations a little, and leave a little room for humble reflection.

Wilfred Owen, the great English poet of The First World War, reminds the world that cares to read him that the dead of the battlefield are never asked for their opinion on whether the victory was worthwhile.

…..I am the enemy you killed, my friend.

I knew you in this dark: for so you frowned

Yesterday through me as you jabbed and killed.

I parried;but my hands were loath and cold.

These are the final four lines from ‘Strange Meeting’ found in Owen’s papers after his death on the Western Front.

The poem contains the lines which have come to encapsulate another view of war :

…..For of my glee might many men have laughed,

And of my weeping something had been left,

Which must die now. I mean the truth untold,

The pity of war, the pity war distilled.

Surely, as we celebrate a victory in a battle that had to be fought, a battle of national survival, we must remember and reflect on this : that the whole truth is rarely told of war.

Nations co – opt victory for them selves and ignore defeat. We British have Waterloo Station not Dunkirk Station. Blucher, the Prussian, saved the day for Wellington, but he rarely gets a thank you inEngland. The French have Austerlitz but not Leipzig.

The amnesia extends from the bottom – the lost lives that never speak, to the top – the sublime truth that in strategy, every battle is at least a partial defeat.

The aim of grand strategy is not to destroy men but to destroy or eliminate the will to fight.

If your enemy attacks, you have failed before you begin.

The cost of war is always immense, and the price paid is always incalculable.

Not, perhaps, entirely incalculable – buildings and factories can be replaced, Hiroshima and Nagasaki are resplendent again, and we can use the art of accountancy to calculate the cost.

But how do we put a price on the truth untold?

When the dogs of war are let slip, as they always are, over and over again, we are every time failing to solve the greatest problem faced by the human species, the one problem that science, otherwise our one great hope, can never solve, and religion, the hope of billions, has only ever avoided – the problem of human violence.

For every battle won hides and buries some of the truth.

And every battle won lodges the seeds of the next in the hearts of men and women.

And somewhere, quietly working in a laboratory, men and women are working on the next generation of deadly weaponry.

Let us remember this alongside our pride in battles won.

Enjoy the day, dear Russian friends, but please do remember that while Borodino was a victory, like all battles, it was also a failure.

The Statesmen of history have fought, won and lost a lot of wars. Few of them have fought war itself.