The Big Three's Victory In Europe 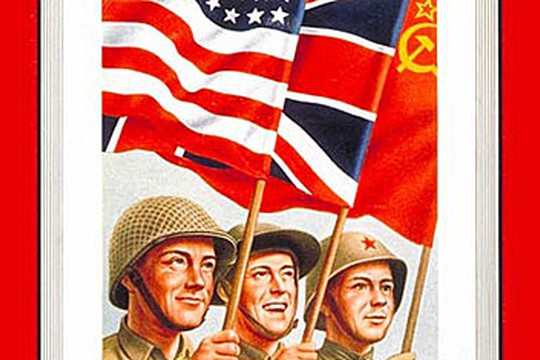 This article appeared in Time on May 14, 1945. The Nazi revolution is suppressed. The Allies managed to prevent the enslavement and mass destruction of people. The authors of the publication note that, unlike the USSR, the Americans made little contribution to the victory over Nazi Germany.

«Americans also paid heavily in blood and sacrifice, but not on a scale comparable to the other two. Unlike the other peoples, Americans were not invaded or directly threatened by the Nazis, but—slowly, haltingly, after argument and contention—they overcame their old belief in isolation and acknowledged that the Nazi attack on civilization was as much their war as the Japanese attack on Pearl Harbor. Having made this decision, difficult for them, Americans not only made their contribution in blood and military skill to the defeat of Naziism, they also provided the greatest part of the machinery which overmatched slavery as a tool of war.

Coalition Set Up. The effective coalition of these peoples brought modern civilization through—battered and partly destroyed, but in triumph. And last week, even while its enemies succumbed in Europe, in San Francisco a parliament of the victors was groping toward a stronger and better civilized world. How crude were their efforts, how uncertain their vision was all too evident. Yet men everywhere were so painfully aware of the imperfections of the civilization which had triumphed that perhaps they underrated the triumph's decisiveness.

After the fall of Napoleon, France and Austria were considered two of the greatest powers of the world, but the War of 1870 revealed that Germany, a greater power than either, had arrived upon the scene. And World War II revealed that the U.S. and modern Russia were both greater powers than Germany. The victorious coalition of these two with Britain promises to dominate the world until the next great war—or until mankind can find a better argument than war.

But even if the hopes vested in San Francisco are not fulfilled, World War II should not have been in vain. The Nazi attempt to derail the train of history caused a near-wreck but brought doom upon its perpetrators. After such an overwhelming defeat, the enemies of civilization should not find it so easy to emerge from the sewers. And the victors, having mustered the forces of civilization, will have a stake in preserving them.

The 68 months' struggle is now over. One job is done, one battle won. Civilization is now free to pour its full strength into the other battle, the war against Japan».