The Conundrum of the South Korean Corvette (I) 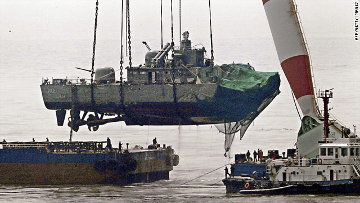 Seoul has unveiled the results of the investigation into the sinking of the Cheonan corvette in the Yellow Sea on May 26. According to the report put together by a commission of South Korean military and unnamed experts from the US, Canada, Great Britain, and Sweden, “Cheonan was sunk as the result of an external underwater explosion caused by a torpedo made in North Korea. The evidence points overwhelmingly to the conclusion that the torpedo was fired by a North Korean submarine”.

Responsibility for stating that evidence points to the conclusion “overwhelmingly” rests entirely with the authors of the document. The key peace of evidence cited is a fragment of a torpedo propeller – somehow recovered at the final phase of the investigation - with a marking which reads “No. 1” and matches a N. Korean torpedo found 7 years ago in the Yellow Sea. Considering that the blast was allegedly caused by a torpedo carrying a net explosive weight of 250 kg, investigators must have been remarkably lucky to find the right fragment with the marking implicating N. Korea. The marking, which is the sole indication of the country of origin of the torpedo, could of course look exactly the same on a South Korean torpedo.

The commission is churning out new facts and details evidently meant to shatter one`s imagination. Reportedly, several N. Korean mini-subs and a mother-ship left the country`s unspecified naval base in the Yellow Sea 2-3 days before the incident, headed for an unknown destination, and returned 2-3 days after the incident. Though the subs had to be maneuvering in a heavily monitored zone near the maritime border between the Koreas, their routes had not been tracked as they managed to evade radars. The version contradicts the previous US claim that satellite and acoustic reconnaissance showed no signs of presence of any N. Korean ships or subs in the region of the Cheonan sinking.

The spin-off of the version offered by the report commenced immediately upon its being circulated, and there is a distinct impression that the developments are following an a priori blueprint. The White House endorsed the commission`s conclusions implicating N. Korea and condemned “the act of aggression” in a statement made available almost synchronously with the report. Even earlier, US President B. Obama talked to S. Korean President Lee Myung-bak over the phone and agreed that all contacts with N. Korea should be suspended until it becomes clear what caused the tragedy and who perpetrated the attack. Japan, the country espousing greater pressure on N. Korea and its international isolation as a universal approach, also expressed full support for Seoul in no way assessing the data collected by the investigation.

In S. Korea, the campaign was led by President Lee Myung-bak who instructed the country`s armed forces to take resolute countermeasures against N. Korea to make new “provocations” impossible. The political and even more so the military circles are whispering that some form of retaliation, even including military acts of point character, might be feasible. The set of ideas was voiced by Korean minister of national defense Kim Tae-Young who said N. Korea must pay full price for what it had done. Crisis control centers probing into the state of national security, the readiness of state institutions to face an emergency situation, etc. are mushrooming in Seoul, and there is a general feeling of sitting on a powder keg.

Seoul is nevertheless aware of the potential consequences of a military offensive against N. Korea for the entire Korean Peninsula and clearly regards it as an option of last resort. The solution ideal from Seoul`s perspective is ever greater diplomatic pressure on Pyongyang, preferably with the blessing of the UN Security Council. To put the plan into practice, Korea needs the support of the countries playing the key roles in the region, notably that of the six-party talks partners and the UN Security Council permanent members. The position of the West being fully cooperative, Seoul`s current priority is to convince Russia and China to consent to “punishing“ Pyongyang.

On May 21, Russia`s foreign minister S. Lavrov talked over the phone to his Korean counterpart Yu Myung-hwan. The latter reiterated that the evidence obtained by the investigation pointed to Pyongyang, but the reply of the former – as the official account posted by the Russian foreign ministry shows – was diplomatically cautious. Lavrov said Moscow would carefully review the pertinent materials, both those from South Korea and “from other sources”. Thus he made it clear that Moscow had reservations about the S. Korean version of the incident and deemed further verification necessary. Lavrov also urged restraint on both sides of the conflict to prevent escalation on the Korean Peninsula. This is exactly the responsible type of behavior required under the current circumstances, and hopefully Moscow`s position will remain unchanged.

China`s position over the matter is generally the same. Its foreign ministry spokesman described the sinking of Cheonan as a tragic incident and opined that the priority in dealing with it should be to sustain peace and stability on the Korean Peninsula and in the entire North East Asia. Beijing is calling for calm and restraint until it transpires what exactly happened. Unofficialy, China criticizes the evidence at South Korea`s disposal as unconvincing, patchy, and contradictory and says it is going to assess the situation independently.

Three significant documents rejecting N. Korea`s connection to the incident – statements by N. Korea`s the national defense commission, foreign ministry, and the committee for the peaceful reunification of Korea - saw the light of day in the country over the past several days. According to the statements, the evidence was forged and N. Korea is ready to send its inspectors to assess it. Pyongyang is directing heavy criticism at the campaign around the sinking of Cheonan, calling the current situation “a phase of the war” with all the corresponding consequences. Under the conditions, N. Korea pledges to mobilize its resources to protect national sovereignty and to respond with a full-scale war and unlimited use of force in case S. Korea decides in favor of “retaliation”. No doubt, these are not just words.

Pyongyang`s offer to delegate representatives to review South Korea`s “evidence” is a timely and rational initiative. This form of cooperation should keep the inter-Korean dialog afloat during the crisis and, if both sides approach the problem honestly, help defuse the conflict. A lot depends on how Seoul reacts to the proposal but, sadly, initial reports seem to indicate that the Korean leadership is under various pretexts trying to dodge the issue. South Korea`s stonewalling Pyongyang would further diminish the credibility of the evidence.

Seoul`s next move – or series of moves – will determine the evolution of the conflict. Not much time is left to wait since on May 24 South Korean President Lee Myung-bak is to address the nation and lay out a plan for the country`s further response.