The Conundrum of the South Korean Corvette (II) 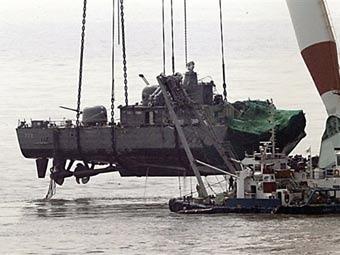 The report on the sinking of S. Korea`s Cheonan corvette claiming that the tragedy had been caused by a torpedo fired by a N. Korean submarine caused further escalation on the Korean Peninsula. In a strongly worded address to the nation on May 24, S. Korean President Lee Myung-bak made accusations against N. Korea, charging it with organizing a military provocation against its southern neighbor. Seoul declared that in response it would suspend contacts and economic relations with Pyongyang (except for the cooperation in the framework of the Kaesong industrial park project which awaits a particular decision), debar N. Korean ships from entering S. Korea`s territorial waters, and resume the propaganda broadcasting via loudspeakers at the border between the Koreas (the speakers were silenced as a gesture of good will under president Roh Moo-hyun). Lee Myung-bak also demanded that N. Korea apologize for what had been done and punish the individuals responsible for the incident, threatening that otherwise Pyongyang would be ostracized by the international community. It is generally a decided matter that the Cheonan incident dossier will be submitted to the UN Security Council. The S. Korean leader pledged that his country would adopt a position of intolerance to N. Korea`s escapades (the part of the statement carried thinly veiled criticism of the policies of the previous S. Korean administrations) and would fully use its right to self-defense in the case of further provocations.

Predictably, Pyongyang paid in kind. Rejecting any connection to the sinking of the Cheonan corvette, N. Korea charged Seoul with forging evidence and attempting to shift the blame onto N. Korea due to political regards. As a reaction, N. Korea announced a new policy aimed at phasing out of the relations with South Korea and annulling their legal basis built in the past years, possibly including the 1991 Non-Aggression, Cooperation, and Exchange Pact. The list of counter-measures includes suspending all contacts with S. Korea such as the official dialog for the period of Lee Myung-bak presidency (that is, till February, 2012), ending all inter-Korean communication including that in Panmunjom, between the Red Cross societies, the armed forces, and the navies in the Yellow Sea (the purpose of the the latter was in fact conflict prevention), and the sealing off of N. Korea`s territorial waters and airspace. It was stated that from now on any inter-Korean issues would be viewed in the light of the war-time law and that the loudspeakers in the proximity of the border between the Koreas would be suppressed “by point fire” in case they broadcast propaganda hostile to N. Korea.

Pyongyang said its armed forces were brought in the state of full combat readiness due to the current escalation and stressed that any steps infringing upon N. Korea`s sovereignty taken by Seoul would meet with “full-scale war” and “unlimited use of force”.

The current escalation on the Korean Peninsula is unprecedented. The post-war history of the relations between the two Koreas abounds with incidents which were hard to attribute undoubtedly to either side but, importantly, problems were invariably localized and never triggered broader escalations. At the moment the S. Korean administration backed by the US and Japan is clearly seeking to politicize the tragic but still obscure incident and, by holding N. Korea entirely responsible for it, to invite new international sanctions against the defiant country.

The widespread impression among the watchers is that Lee Myung-bak`s team which, its reconciliatory rhetoric notwithstanding, was eager from the outset to dump the positive legacy in the inter-Korean relations, now feels that the time has come. This May saw a momentary demise of the basis of the inter-Korean dialog and of the mechanisms of cooperation and trust-building that it took decades of hard work to create. For the first time since the Cold War 0f the early 1970ies, we are witnessing a total diplomatic disconnect between N. Korea and S. Korea, and a rebound will likely take years to achieve.

Now the question is what the future holds and what objectives the key players are trying to accomplish. S. Korea`s motivation is obviously to drum up international support and to push for new UN Security Council`s sanctions or at least to exact from the UN an official recognition of N. Korea`s responsibility for the Cheonan incident followed by condemnations and calls for minimizing the relations with the “aggressor”. It appears that the idea is to make the already troubled country face further problems and thus to weaken or even dislodge its current regime. Not to lose momentum, Seoul is in a rush to get the incident dossier on the UN Security Council`s table and hopes to get the job done by mid-June.

Oddly enough, the current upheaval overshadows the main theme in the Korean Peninsula politics, namely, the prospects for the six-party talks dealing with N. Korea`s nuclear program. Pyongyang`s opponents – S. Korea, the US, and Japan – used to demand that N. Korea resume the negotiations promptly and unconditionally and even offered their own recipes for getting this done (such as Lee Myung-bak`s grand deal project), but now they avoid mentioning the talks as if the problem is unimportant compared to investigating the Cheonan sinking.

At this point the question arises naturally what force could have been behind the Cheonan incident and in whose interests it was inflated to become a global problem. One must be naive to believe that S. Korea could independently – without its patron`s blessing and support - make such far-reaching decisions and, in a matter of days, float the broad international campaign. Whoever is actually responsible for the Cheonan tragedy, the very developments warrant the hypothesis that they are a result of careful a priori planning.

Notably, the incident took place exactly when China`s plan for reanimating the six-party talks started to materialize. The plan encompassing a N. Korea-US summit, an unofficial six-party meeting, and the full-format revitalization of the Beijing dialog – seemed to be more or less a point of the international consensus. By the end of March the head of N. Korea`s delegation was ready to fly to the US, and now N. Korea`s angriest critics in Washington say Pyongyang`s diabolic plan was to torpedo not only the corvette in the Yellow Sea but the whole negotiating process, while ostensibly asking for a summit. In our view, the theory does not withstand criticism – considering that Pyongyang dodged the six-party talks for 18 months effortlessly and without losing face, it did not have to take the risks and face the consequences.

Alternative explanations that look more logical can be found easily. Preoccupied with Iran and Afghanistan, the US can`t at the same time focus on the six-party talks. The present US negotiating team headed by Stephen Bosworth is clearly weak and even has no specific plan for breaking the stalemate should N. Korea revert to the negotiations. Accordingly, there could be an intention to freeze the negotiating situation under some pretext, for example blaming a provocation on Pyongyang, and, for the time being, rely on sanctions against N. Korea. Perhaps, the freeze of the six-party talks became the option of choice for Washington not only because the US cannot afford to stretch its resources thin, but also because – contrary to official claims – the White House and the Pentagon do not regard the threat posed by N. Korea`s nuclear program as truly serious due to the more than modest proportions of the country`s nuclear arsenal and missile capability. Thus, the Cheonan incident has played into Washington`s hands.

The Cheonan tragedy provided a pretext for intensifying the pressure on N. Korea and for further isolating it internationally, but there may be a more fundamental agenda behind the currently unfolding political intrigue: the US priority is to contain China`s ambitions on the Korean peninsula and in the entire region. Washington hopes to at least confront China with a difficult choice between N. Korea allegedly responsible for the provocation and the international community condemning it. Either option disadvantages China, either luring it into a conflict with Seoul and Tokyo or affecting its relations with N. Korea. So far Beijing manages to maintain a balanced position. At the East Asian Summit in Seoul, Chinese Premier Wen Jiabao stressed that the page must be turned on Cheonan as quickly as possible and that top priority must be given to reducing the level of confrontation on the Korean Peninsula, preserving stability, and ensuring peace. Time will show how long Beijing will be able to hold on under the challenging circumstances.

The US media are already talking, albeit cautiously, that the tensions on the Korean Peninsula open opportunities to advance the US political and military interests in the region geographically close to China. The US and its allies have for quite some time been expressing concern over the increasing activity of the Chinese air force, and references to N. Korea`s aggressive conduct serve to justify the arms race spun off by the US, South Korea, and Japan in the region. A few days ago Seoul announced a series of naval exercises, some of them joint with the US, and the allies are also boosting reconnaissance in the Yellow Sea. Japan is also active – it has put together a heftier 2011 military budget and is about to adopt a new national defense program for the coming 10-15 years. In the context, the N. Korean threat looks clearly inflated while containing China is an absolutely real objective.

Now, what about Russia? S. Korea continues courting Moscow. President Medvedev said in a phone conversation with Lee Myung-bak that at the moment task number one is to identify the real cause of the Cheonan sinking and then to resort to internationally approved measures based on reliable information. Russia is sending its own group of experts to South Korea to examine the available evidence and to get familiarized with the investigation results. Russia`s position is well-balanced – Moscow exercises the due caution and reserves the right to make conclusions only on the basis of independently established facts. Actually, the situation still evokes serious questions, but in any case the lesson to be learned is that the chronic tensions on the Korean Peninsula pose a threat to Russia`s Far East. The tensions stem not so much from Pyongyang`s “unpredictability and aggressiveness” as from the risky and short-sighted politics of Seoul. Another pertinent factor is Washington`s tendency to freeze the military-political configuration sustaining tensions on the Korean Peninsula at the level making it possible for the US to contain both Russia and China in the world`s strategic region.