The Crises of Europe 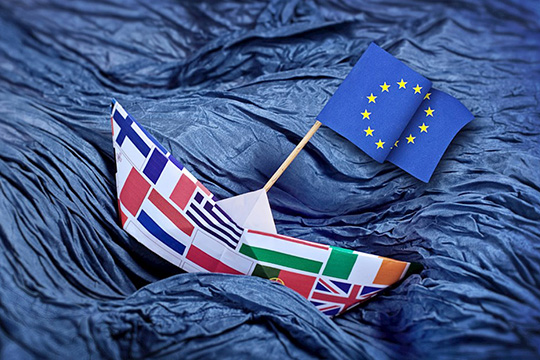 After the end of the Cold War, the US established itself as sole the global player. Together with the US, NATO also expanded its power, even though it had to set itself new goals with the fall of the Soviet Union. Over the years, the EU also expanded alongside NATO as a further alliance for European states. Extension of EU to eastern Europe and Balkans offered new opportunities for the European states. In the first two decades after the end of cold war the EU and its member states had the window of opportunity to establish themselves as global players separate from the USA. But several crises have prevented the EU from positioning itself in world politics.

The EU faces many different problems in these times. Some of these problems are inherent and are of a structural nature. Others are of an external nature and pose major challenges to the EU countries, especially in matters of unity and solidarity. Difficulties in solving them result in turn from the structural factors of the EU. All challenges must ultimately be tackled by the EU if it wants to establish itself as a global player, or even continue to exist as a Union.

If one look at developments in recent years, one can see various crises that the EU had to cope with. One of the first and fundamental crises can be mentioned as the EU's identity crisis. This crisis is fundamental because it is related to many other crises of the EU. The EU was originally only an economic union. In its present form, it was established after the signing of the Maastricht Treaty in 1992 and its implementation in 1993. It was also this treaty that established the so-called "European values" and gave rise to the term "European identity". The EU defines freedom, democracy, the rule of law, human rights and fundamental civil rights as fundamental European values. The EU, which is now a union of different Member States and cultures, has also agreed to be a multicultural community.

Due to demographic and economic changes, the EU is dependent on migration. Europe has therefore been accepting migrants for a long time. Although the EU emphasises Universalism and Multiculturalism, EU has difficulties to manage the "Other". Populism is on the rise in the world. This can be seen in many countries of the world such as Brazil, USA or India. Even European values could not protect the EU from this global development. With the rise of migration and the multicultural character of European society, the EU was drawn into an identity crisis. This led to a strengthening of right-wing populists in the EU. Since 11 September 2001, European right-wing populists have been using either anti-Muslim racism, racism against refugees or racism against foreigners in general to gain political advantage.

Further crises have intensified this development and had a structural impact. One of these is the economic crisis of 2008, which, on the one hand, put the solidarity of the EU to the test for the first time and, on the other hand, showed that European politicians are not hesitating to blame foreigners for the economic situation. In countries that were most affected by this crisis, such as Greece and Italy, there was an increase in xenophobic statements within politicians and right-wing populist parties gained popularity.

This was pushed to the next level with the refugee crisis in 2015. From this point on, xenophobia reached its peak in other European countries as well. Right-wing populist slogans became socially acceptable and the structural racism within the EU states became more and more visible. Thus, we can observe the rise of right-wing national parties in the EU states, among others in Germany, France, Austria and Italy. As a result, nationalist ideas are coming to the fore and the so called European values are no longer on the forefront. The Brexit is also a consequence of this development and could be an indicator in which direction the EU is moving.

This refugee crisis, on the other hand, also brought the lack of European solidarity to light. The burden of the crisis was shouldered by a few Member States, and attempts were made to outsource the problem to third countries such as Turkey. Countries such as Greece, Italy and Spain were extremely affected by this.

The current events around the Corona Pandemic confirm this development also, where some EU countries were fighting a battle for medical equipment. Instead of working together to find solutions, countries such as France and Germany have banned or restricted the export of medical equipment to other EU countries. This led to an increase in mistrust within the EU.

The economic crisis in 2008 and the refugee crisis in 2015 also highlighted the economic gap within the EU. While countries such as Germany and the Netherlands are benefiting economically from the EU and growing, the countries in southern Europe are confronted with economic problems. Greece, Spain and Italy and are still struggling with the consequences of the 2008 economic crisis. France is also facing serious economic problems. Unemployment in these countries is the highest and, in some cases, far above the EU average. Both in the EU and within the EU countries themselves, we see that there is a crisis in the distribution of income. The countries in the North benefit economically from the EU. The southern states, on the other hand, receive a small share of the EU's wealth.

The EU's security policy constitutes another crisis. Since 11 September and the involvement of some EU states in wars in the Middle East, the EU has seen itself threatened by terrorist attacks. It is therefore in search of a common security policy. The refugee crisis in 2015 also put border protection on the EU's agenda. In order to prevent a second influx of refugees, border protection was re-coordinated. At the beginning of 2020, it finally became clear how the European Border Guard works. In Greece, security forces used excessive force to " defence against refugees" and eventually shot dead refugees on Turkish Greek border, which was criticised by various human rights organisations and the UN. The President of the EU Commission, Ursula von der Leyen, on the other hand, praised the action of the EU Member State and described Greece as a " Shield of the EU". This shows how far the EU has moved away from its initial values, such as human rights.

Finally, the EU is also facing a leadership crisis. It can be observed that the different EU Member States are in constant rivalry with each other. Even if they are part of the same Union, the states pursue national interests in international politics. This can be seen in Libya, where France and Italy have different policies and Germany is trying to keep its neutrality and act as a mediator. The powerlessness of the EU was also seen in the Syrian war. Since the different Member States pursued different solutions, the EU was not able to act although the European continent is directly affected by Syrian crises through refugee waves and terror attacks. While countries such as Turkey, the USA and Russia were able to act, the lack of a political leadership prevented the EU from developing strategies and implementing them.

In conclusion, one can claim that the multiple crises that are mentioned above drives the EU states away from their own values and also from each other and this creates the danger of a fragmentation of the EU in the next two decade. This also prevents the EU from being able to act as one entity and thus become an important global player. In its current from EU is still an economic and political giant with no real hard power on the ground.