The crisis of positivist, “evidence-based” political science in US 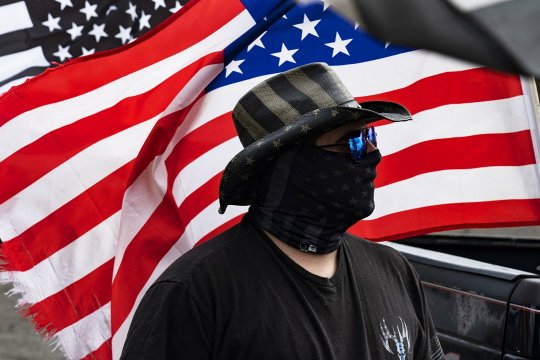 Right from its birth in the 18th century, the United States of America emerged as one of the most advanced countries, or even the most advanced one in terms of government organization and the ideology of state building. The newly independent British colony got a chance to shed off the past and start from the ground up, and the Founding Fathers, as they are called in the US, used this chance to the max, erecting the three pillars of the American political order - the Declaration of Independence, the US Constitution and the Bill of Rights, which laid out the most progressive ideas of their time: human rights, democratic procedures, separation of powers, trial by jury, broad state autonomy, social contract, free speech, and many others.

The period of the rapid development of these ideas, akin to the French Enlightenment, has since been known in America as the "Age of Reason." This time period, just like the ideas and principles it generated, is closely associated with empiricism and positivism – the two dominant philosophical streaks of that time, which denied philosophy as such and prioritized a scientific fact, an observed phenomenon, an experiment, logic, and ignored theoretical philosophical constructions, complex models and hypotheses not supported by scientific data. Back then, this new philosophy was the philosophy of science and was conceived as something that would replace the outdated classical philosophy with its interweaving of worldview, morality and faith, and remove ethics from the speculative structure of society, with its characteristic disregard for experiment as a method of cognition.

Today, almost 250 years since the adoption of the US Constitution, many elements of the American state system have not only lost their original progressive meaning but even look downright archaic. The most vivid examples of this are the life-long appointment of Supreme Court justices, who maintain their positions for decades, the electoral system of voting, whereby members of state electoral colleges are not obligated to vote according to the will of the people of that state, and the decentralized legal system, where precedents are superimposed on precedents, and the passage of a new law does not entail a revision of the old one.

Even though this archaism is obvious to any unbiased observer, not only are there no active discussions about constitutional reform or at least new amendments to the fundamental law of the land, but there are heated discussions going in Congress, the media and universities about how to interpret provisions of the ancient document in such a way as to better reflect the founding fathers’ ideas.

Any liberal arts education in the United States, from the high-school level  up, includes a detailed study, not critical, but apologetic, of the history of the founding of the United States, the adoption of the Constitution and the early  period of the US as a country. The personalities of the founding fathers and their philosophical views are front and center in most of these courses, and the higher the prestige of the educational institution, the more diligently the knowledge of the “essential foundations” of American statehood is implanted in the students’ minds.

As a result, the overwhelming majority of America’s intellectual elite leave their universities with deep faith in the sacredness of the US Constitution and the principles embedded in it. They are also steeped in the very spirit of empiricism and positivism of the Age of Reason. These are exactly the philosophical doctrines that shaped the development of humanitarian sciences in the United States and continue to do so today, even though they have long been considered in Europe as limited, to say the least.

This is also why scientific psychology has been reduced to behaviorism and the theory of historical stages has been dismissed, replaced by a civilizational approach and the so-called "evidence-based" or "fact-based" political science, which is the centerpiece of this article.

The seeds of political science and sociology, which fell into the fertile American soil in the first half of the 20th century, were soaked in the juices of the developed political class, their young shoots basked in the rays of a fleeting electoral cycle and an all-pervading electoral system, and their flowers were brighter than anywhere else. Election managers have never experienced any shortage of money and resources, and experts, who were able to predict the voters’ reaction, awaited universal respect and cushy jobs.

Now, in the run-up to the 21st year of the new century, America has a whole army of sociologists and political scientists, with regiments and divisions “deployed” in every state and in every district of each state. This army is big enough to simultaneously serve the election campaigns of two presidential candidates, dozens of candidates for state governors, hundreds of congressional and senatorial hopefuls, and thousands of candidates for elected positions in local administrations. This 300,000-strong army has its own soldiers - street agitators, and its generals - campaign managers. It also has its own intelligence - sociological institutions and political spin doctors, trying to analyze the voters’ preferences and work out the best strategy and tactics.

It would seem that all this multitude of people, endowed with almost unlimited resources, should have long ago studied the political landscape of every single corner of America and provided an accurate forecast of the locals’ reaction to statements made by a politician, or steps taken by his  opponent. This doesn’t happen, however, and forecasts made by political scientists are disproved by reality. The biggest such flop ever was Donald Trump’s victory in the November 2016 presidential election.

This discrepancy between spent human and economic resources and the results attained has much to do with the culture of science and positivism that still prevails in American science. The positivist approach to science focuses on the search for objective truth, which can almost exclusively be achieved with the help of empirical facts and formal logic. This logic for centuries prevailed in physics, but even there it has been a subject of scathing criticism as it eventually turned out that the research method can affect the result of the research, and that one and the same object can have mutually exclusive properties, depending on how it is measured. This means that the fact obtained with so much effort is no longer absolute, and formal logic is simply insufficient in its toolbox.

These are the conclusions reached by physicists who study laws that are not subject to rapid change and are independent of human culture – a discovery that seems to have been completely overlooked by US political scientists, who still conduct public opinion polls as if the question never predetermines the answer, even though this is almost always the case. They avoid making assumptions, because they do not know all the facts, and try to objectively measure the immeasurable - the constantly changing moods of the mass of people divided into thousands of groups according to geographic, gender, age, educational, professional and other factors. And each of the millions of people polled represents a mixture of cultures, religions and ideologies and can change his or her opinion on a given issue every day, even a dozen times a day.

Such a system of studying the electorate and the related forecasting method are doomed to failure. Even if the combined forces of sociologists and political scientists were a hundred times larger and at a certain moment in time could collect data on the people’s preferences that would meet the strictest scientific criteria, the next day this information would be no longer relevant, and the whole work would have to be done again... In real life, however, this does not happen either.

Thus, US political scientists, who have always been taught not to invent theories, but only generalize the available facts, are chasing these facts and use them indiscriminately. Can an ordinary Biden election campaign expert run a scientific check on and compare multi-page descriptions of survey methods, when dozens of surveys are conducted each week, and sometimes, each day? Of course not, and so experts rely on the authority and decency of the organization that provides the "facts." At best, they summarize the results of several surveys, and at worst, they use the one that suits them best.

This is the case at the level of data synthesis and forecasting, based on this generalization, but things are even worth when it comes to research and data collection. In an ever-changing environment, when precious “facts” become irrelevant in a matter of hours, research teams have to rely on the speed of research, rather than its coverage, representativeness or accuracy. This constant race leads to the emergence of such Frankenstein sociological monsters as a poll, where the difference in the candidates’ ratings is less than the margin of error allowed by the researcher, or a methodologically flawed survey, deliberately presented as an All-American poll that less than 1,000 people took part in.

And yet, US sociologists and political scientists still stick to positivism, because positivism is the true-blue American way. Never mind that these principles and methods, invented to study the eternal laws of nature, are now used to "study" the ever-changing mood of the crowd.

The bigger the process that the American system of public opinion research  tries to study or predict, the worse the result: while it works almost impeccably in local elections, at the level of elections to Congress it starts to fail, and during presidential elections things get real bad. A positivist analysis is impossible where you have no positivist facts, which means that the winner will be the one who better applies different methods of analysis. However, such methods are nowhere to find in the American universe, and those who successfully apply them are said to have “guessed.”

According to the American elite, in 2016, Trump "guessed" exactly what the conservative voter wanted. He is “guessing” again this year, while Democrats, also forced to engage in guesswork, use their favorite tactics of “identity politics”: they nominate those who they believe best relate to their typical supporter in terms of demographic indicators - an elderly white middle-aged male, and an African-American woman.

Which of them guessed better the whole world will know very soon.