The Czech history teacher is convinced that the events in Ukraine are an attempt by Russia to "free the victims of genocide." 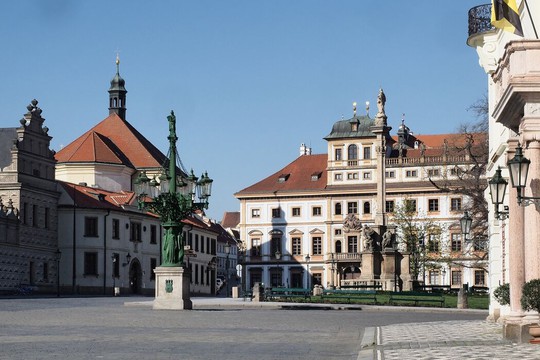 Last Saturday, several demonstrators gathered in Prague's Letenske Sady Park and called on the government to resign. In addition to the former Communist deputy Josef Skály, Marek Adam, a history and Czech language teacher from the Sobeslav Gymnasium (Soběslavi), also spoke there. In his speech, he said that for eight years there has been a "genocide of the Russian-speaking population by Ukrainian fascists" in Ukraine.

"I do not support Russia's aggression, because Russia is not engaged in aggression there, but is trying to free the victims of genocide" - the teacher said at the meeting. When he finished, a policeman appeared next to him. For this, he faces three years in prison. However, but Adam told the police that he did not support any aggression.

The police claim that they have taken up the speeches of some of the demonstrators and are working on their assessment. "We are investigating whether any of them have committed illegal actions," said Jan Danek, a spokesman for the Prague police.

This is not the first time this history teacher has spoken publicly about the conflict in Ukraine. Adam, in particular, is the deputy chairman of the national conservative Alliance of National Forces party, which supports Russia and supports the Czech Republic's withdrawal from NATO. Last year, he ran for this party in the parliamentary elections in the South Czech Region. Across the republic, the party gained 0.9 percent of the vote.

"We unequivocally support the Russian Federation and its efforts to demilitarize and denazify Ukraine" - the party leadership wrote in a statement on February 24, when Russia launched a military operation in Ukraine.

"My views do not affect the learning process," says the teacher

Pavel Klíma, Deputy Hetman of the South Czech Region for Education, condemned the teacher's behavior. A few days ago, because of a statement about a military special operation, he filed a lawsuit against the Alliance of National Forces to initiate of a criminal case. However, he claims that he himself cannot do anything with this teacher, although the regional administration is the founder of the school.

According to Klima, the school director also cannot punish the teacher or dismiss him in any way. "The teacher  could be dismissed only if it turns out that his statements are subject to criminal prosecution. I think in this case the director will have the opportunity to terminate the employment relationship with him," Klima believes.