The “Deal of the Century” - between USA and Israel? 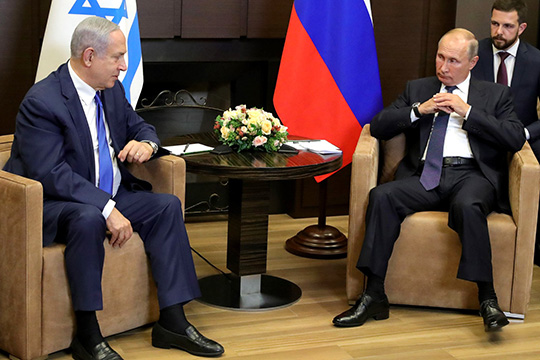 Israeli Prime Minister Benjamin Netanyahu has arrived in Moscow from Washington, right after negotiations with US President Donald Trump and the professionally staged presentation of the "deal of the century" on Palestinian-Israeli settlement. In Mr.Netanyahu’s opinion, “Relations between Israel and Russia have never been so good and stable before.” [i] Incidentally, Moscow repeatedly offered to host such negotiations, but Israel refused to accept Russian mediation in negotiations with the Palestinians. Now, the Russian president has become the first world leader who Netanyahu chose to discuss the details of this far from unequivocal US plan.

According to the Kremlin’s press service, Vladimir Putin is supposed to receive first-hand information about the American initiative. Netanyahu has also made it clear that he intends to discuss with President Putin the proposals made by Trump and "the recent developments in the region."

For now, Russia has assumed a wait and see attitude. A few days ago, Sergey Lavrov told reporters that Moscow considers it important to take into account the position of the Palestinian side and see how the Arab countries will react, what the League of Arab States  will say, and finally, what the quartet of international mediators (Russia, USA, UN, EU) will say in connection with the current situation. [ii]

Deputy Foreign Minister Mikhail Bogdanov has added that parties to the conflict should “engage in direct negotiations and reach mutually acceptable compromises.” [iii] Following the surprise Russian-Israeli summit, Russian presidential spokesman Dmitry Peskov said: “The Kremlin continues to analyze the US plan on a Palestinian-Israeli settlement.”[iv] That the so-called "deal of the century" is actually one-sided becomes clear after going over the main points of the document. Trump's statement calling for creating an independent Palestinian state remains an unachievable goal. A demilitarized state, deprived of the right to enter into military alliances, that has no control of its airspace or borders, can hardly be described as independent, particularly considering the fact that it is divided into several enclaves scattered throughout Israel.

In addition, the plan makes no provisions for the so-called “red lines” or points of great concern for the Palestinians - the return of refugees to their homeland and the declaration of East Jerusalem as the capital of Palestinian state. According to Trump, refugees should remain where they currently are (which outraged Lebanon), and a remote suburb of Jerusalem should become the capital of the "independent" Arab state. Thus, the harsh “no” to this plan from both Palestinian President Mahmoud Abbas and Hamas’s leadership was to be expected. The $ 50 billion investment in infrastructure projects which was promised as compensation for de facto abandoning the idea of sovereignty (which has yet to be collected) appears to have added to the Palestinian fury. Nevertheless, President Mahmoud Abbas has announced readiness to resume negotiations with Israel, but only under the patronage of the Quartet of international mediators.

Apparently, Washington had expected such a reaction, for as he presented his plan, the American president, in a move to either warn or frighten the Palestinians, pointed out that the “deal of the century” is their last chance to gain statehood. And the fact that Palestinian representatives were not invited to Washington to attend the presentation of the project indicates that the Americans are aware of the pro-Israeli nature of their proposals.

As for the reaction of the world community Sergey Lavrov spoke about, the American plan was openly backed by Britain and ….Saudi Arabia, which "spoke highly" of Washington’s proposal and urged parties involved to hold negotiations under its auspices. In all likelihood, this was done not out of dislike for the Palestinians, but out of support for Israel - its de facto ally in an existential confrontation with Iran. The League of Arab States will convene for an emergency session on February 1st. As for the position of the United Nations, according to Stefan Dujarrick, the official spokesman for the UN Secretary General, the United Nations “remains committed to Palestinian-Israeli conflict settlement on the basis of UN resolutions, international law and bilateral agreements, as well as in accordance with the vision of the two states – Palestinian Authority and Israel – which are neighboring each other on the basis of the 1967 borders."[v]

Consequently, the reaction of the global community to the “deal of the century” can be described as fairly cautious, if not outright negative.

Trump was beaming with optimism at the plan presentation in Washington: “Probably, at first they (the Palestinians - A.I.) will not accept it (the proposed plan - A.I.), but I think in the end they will, it’s very good for them .. . We believe that, in the end, we will have the support of the Palestinians, we’ll see.”[vi] There is no doubt that in its current form “they” will not want “it”. However, for Trump, the result is probably not so important. What counts is that the American president demonstrated to the voters that he was acting on his main foreign policy pledge - to work towards settling the Palestinian-Israeli conflict. With just over six months to go before the presidential elections in the United States, this yields a lot of benefits. Netanyahu is in a rush as well. Given that he faces criminal charges for corruption, all this - a successful “deal”, negotiations with Putin, and the pardoning of an Israeli woman convicted in Russia – comes more than handy!

Planning a meeting with the Russian president, the Israeli leader probably hoped that Russia's possible approval of the American initiative would set an example for the “undecided” actors of which there are many in the world. And the most important thing is that the Palestinians, who do not trust the current American administration after Washington recognized Jerusalem as the indivisible capital of the Jewish state, may heed Moscow’s opinion.

It seems that having proposed a project that is not feasible in its current form, the United States, wittingly or unwittingly, “gave the buyback” to Russia, which, according to Dmitry Peskov, “….continues to be a responsible member of the Middle East Five. If necessary, Russia is ready to make every effort, to do everything possible to achieve a viable peace in the Middle East.”[vii] And the Israeli leader cannot but understand this.