THE ‘DEFEAT PARADE’ OF GERMAN POWS IN MOSCOW 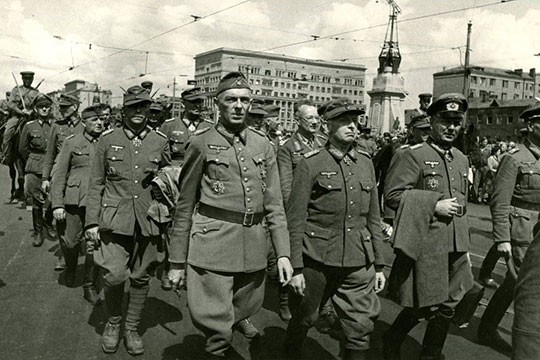 They had planned a victory march on this street leading to the Kremlin.
Photo: The Russian State Archive of Socio-Political History, collection 17, registry 125, case 263, p. 47

Back in the fall of 1941, public statements were made by the leadership of the Nazi Germany that preparations were underway for a victory parade in Red Square once Moscow is successfully captured by the Nazi troops. There are no details about the number of troops to participate in the parade or anything else that have survived, except one, namely that Adolf Hitler was planning to inspect the parade in personal.

Two and a half years after that, the Nazi troops did march through Moscow streets, but it was not a victory parade. The people of the USSR were quick to call it the “defeat parade”. On July 17, 1944, over 120,000 Soviet people including residents of Moscow and visitors from all over the country watched the German soldiers and officers in dust-covered uniforms march along the central streets of Moscow, accompanied by a Soviet military escort of army solders and NKVD troops. A total of  57,640 German troops including generals and soldiers alike made the dream of the Third Reich’s Führer of marching in the very heart of Moscow come true, although not the way he had intended.

Many believe that the idea was Joseph Stalin’s. After all, the he operation to deliver German POWs to Moscow and hold the parade was named in honor of the 1938 U.S. musical film The Great Waltz, which was known to be one of Stalin’s favorite movies. It’s not impossible, however, that the title for the operation was chosen by NKVD chief Lavrenty Beria who was well-informed of Stalin’s likes and preferences. Beria might have been wished to please the USSR’s leader, and the idea of a waltz might have been suggested by the very plan for the parade itself, as the POWs were supposed to move along Moscow’s famous Garden Ring, a circular ring road avenue around central Moscow, completing a full circle, as if in a waltz.

As for the reasons to organize such an unusual POW parade, most experts seems to agree it was intended to demonstrate to the Allies the scale of the Red Army’s achievements in Belarus. The better part of the Wehrmacht’s forces had been deployed to the Eastern Front, and so a massive German POW march was perceived as a good way of showing the success of the Soviet offensive operation.

The operation was carried out in secrecy. Neither the military who escorted the POWs to Moscow,  nor the POWs themselves or the residents of Moscow had any clue about the parade. A lot of the documents detailing the preparation for the parade have not been disclosed to date. One of the very few papers that have made it into the public domain is a note dated July 15, 1944 written by head of the People’s Commissariat for Internal Affairs Lavrenty Beria to inform the State Defense Committee  that the “POW to be convoyed along Moscow streets beginning at 11 a.m. on July 17.”

Starting on July 14, German prisoners began arriving in Moscow. They were accommodated at the Dynamo Stadium and the Moscow Hippodrome. Eighteen trainloads of POWs were to be marched from the Hippodrome along Leningrad Avenue and Tverskaya Street (formerly known as Gorky Street) via Mayakovsky Square to the Garden Ring and then along the ring until the Kursk railway station. The remaining 8 trainloads of POWs were supposed to march the other way from Mayakovsky Square along the Garden Ring until Kaluzhskaya Square and then south-east down Leninsky Avenue (formerly known as Kaluzhskaya Street) until Kanatchikovo railway station.

Commander of the  Moscow Military District Colonel General Pavel Artemyev was in charge of the convoys. The public order, public safety and transport security were to be maintained by Military Commandant of Moscow Major General Kuzma Sinilov and Moscow Police Chief  Commissar 2nd rank Viktor Romanchenko.

The announcement to the public was made by the Moscow Police Chief on the back page of the Pravda daily on the day of the march. The public was informed that on July 17, 1944, a convoy of 57, 600 German POWs would be marching through the center of Moscow on its way to the POW camps. The details of the routes were given. The residents and visitors to Moscow were also informed that traffic and accessibility of the streets along the routes would be “restricted”. All Soviet citizens were advised “to comply with the order maintained by the police force and not to disturb the POWs in any way”.

German prisoners left the Moscow Hippodrome in large formations of 600 men, 20 per row at 11 a.m., as planned. They were well fed and given water to make sure they can withstand the long march. A total of 1227 highest ranking captured officers were “in charge” of leading the parade.

At the head of the march were 19 generals and six colonels, in full uniform, bedecked with medals, and six colonels and lieutenant-colonels. Among the generals were Commander of the XXVII Army Corps General of the Infantry Paul Gustav Völckers; Commander of the LIII Army Corps General of the Infantry Friedrich Gollwitzer; Commander of the XII Army Corps Lieutenant General Vincenz Müller; Commandant of Mogilev Major General Gottfried von Erdmannsdorff; and Military Commander of Bobruisk Lieutenant General Adolf Hamann. Two of these were later publicly executed for war crimes. Vincenz Müller became a convinced anti-Nazi and returned to a military career in the GDR, although his life ended with what many believed was a suicide. General Völckers died in Soviet captivity. Friedrich Gollwitzer  was convicted as a war criminal in the Soviet Union and released in 1955.

Below is an eyewitness account of the march made by the popular Soviet writer and reporter Boris Polevoy for the Pravda daily:

“Generals are marching in the first row. The lifespan of a German general by far exceeds that of a German soldier, so it’s quite possible some of these generals already did some marching before in Europe as part of Nazi victory parades. They don’t look victorious marching through Moscow’s streets now, these “conquerors of European nations”. Blood-covered Nazi generals hardly ever knew what honor is, so they have nothing to lose now. When they were bringing death and destruction to the occupied lands, they had no guilty conscience because most likely they have no conscience at all. But even these Nazi overlords feel ill at ease marching under the silent and intense gaze of all the Moscow residents who came to the streets to see the defeated oppressors. Lieutenant General Adolf Hamann, commandant and butcher of Bobruisk also known for the atrocities he had committed in Orel, a big square man, is walking slowly, not daring to look up – not even once. Next to him is Major General Gottfried von Erdmannsdorff walking in full uniform and decorations. He keeps looking around sheepishly and slouching as if trying to hide his big body, especially when someone can’t help themselves and goes on to shout curses or boo and whistle at the marching formation. Here is Major General Herbert Michaelis, a short fat red-faced man known by his cruelty even towards his own soldiers. He keeps wiping the sweat off his shaved head and smiling like a lackey. His smile is in fact a lot worse than the look of open hatred in the eyes of the tall lean Lieutenant General who looks like a trapped weasel.

The generals are followed by hundreds of officers, all of them dirt-covered, unshaven, unwashed and looking rather like a bunch of hobos than army officers. They are all wearing their uniforms, insignia and decorations, but even that doesn’t help. If the officers look so bad, what can be said about the soldiers who lost anything human about them trying to survive the Soviet offensive in Belarus?”

According to Beria’s reports, “all the POWs immediately boarded the trains as soon as they reached the designated railway terminals at the end of the march to be transported to the detention camps. By 7 p.m. (on July 17, 1944) all 25 trains were fully boarded and on their way to the destinations.”

The Muscovite crowd watched the “defeat parade ” mostly in silence. A few curses were aimed at the passing Germans, while any attempt to throw stones was immediately stopped.

The parade ended with a cleanup. After the long row of prisoners had passed, trucks with hoses watered down the streets, which served both as a hygienic measure since some of the POWs had developed stomach conditions and as a symbolic gesture – cleansing the soil from the invaders and the “Nazi dirt.”