The Eurasian Economic Union (EAEU) : the Core of Continental Integration 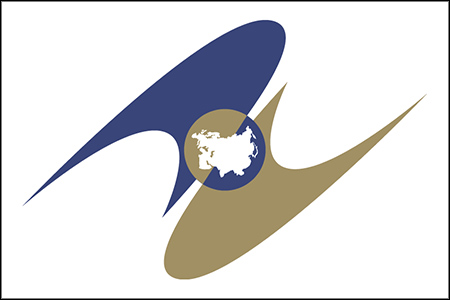 Among the highlights of  the year there are :

- approval of the Customs Code by all country-members of the EAEU;

- coordination of the digital agenda by the member countries of the Union;

- systematic removal of barriers and restrictions in the EAEU markets and

- development of cooperation with other countries.

The year 2017 for the EAEU was marked by positive dynamics in different sectors: on the whole industrial production growth in the Union amounted to 3.6 %,  in agriculture – 1.5 %, in freight and passenger turnover – to approximately 7 %. In 2017 the volume of bilateral trade in the Union increased by more than a quarter. Since the beginning of 2017 foreign direct investment (FDI) in the EAEU has almost doubled.

An important line of action of the EAEC, in which significant success has also been achieved, is the establishment of relations with the European Union. As stated by Tigran Sargsyan, Chairman of the Board of Eurasian Economic Commission: "We note that in this year «the ice was broken». This is an important point. Previously, the EU was forced to follow closely what is happening in the EAEU, what institutions we set up and how we adhere to the declared standards. By now the contacts between the EAEC and the EU-level departments of the two commissions have started to develop". According to the Eurasian Economic Commission, the main buyer of exported goods of the EAEU is the European Union: 50.3 % (of total exports), among them, the main buyers are the Netherlands (10,9 %), Germany (7.3 %), Italy (6,3 %), Poland (3.4 %). It is obvious that sanctions and the food embargo has not prevented the increase in turnover of bilateral trade. According to some experts, there has recently been some positive signals in the launching of the industry dialogue between the EAEU and the EU. Regarding cooperation between the EU and the EAEU in the energy sector, it is important to understand that in the near future the share of the Eurasian continent will account for more than half of the total world electricity demand, and therefore it will have a significant impact on the development of global energy. Note that the planned reforms of the EACE energy market (in 2019-2025) are being developed on the basis of the WTO regulatory framework. This increases the level of compatibility of European and Eurasian energy unions. The Director of the EAEC Integration Development Department, Sergey Shukhno said: "In the foreseeable future the EAEC expects to establish a full-scale dialogue in its relations with the EU." Business, particularly in Europe, actively promotes contacts between the two unions and, in fact, is a kind of catalyst for the establishment of relations.

Iran plans to join the Union in February 2018. The Iranian market after the lifting of sanctions begins to open up to external players and is very interesting for companies of the countries-members of the Union. In addition, on the list to sign economic and trade agreements with the Eurasian economic Union there are such countries as India, Egypt, Israel, Serbia and Singapore. At present EAEC has been in  intensive dialogue with these countries. About 50 countries have expressed a desire to cooperate with the Eurasian Economic Union (EAEC), as stated in one of his speeches of Russian Foreign Minister Sergey Lavrov.

At present about 70 % of payments for exports in the EAEC are made in national currencies. The use of the national currencies by the members of the Union in mutual transactions helps the business – it reduces currency risks and removes various economic and regulatory barriers. In addition, it helps the EAEC economies to strengthen the macro-economy and to develop local financial markets.

According to a report published by the EDB Centre for Integration Studies the share of Russian ruble in the currency structure of payments in the EAEU has increased over the last six years from 56% to 75%, while the dollar's share during the same period decreased from 35 % to 19 %. According to their data, the settlements between the countries in rubles make up more than 69 billion dollars, in U.S. dollars – about 18 billion dollars, in Euro – about 5 billion dollars. Strange as it may sound, but the policy to reduce dependence on the dollar was also helped by the economic sanctions imposed by Western countries against Russia in 2014. It should be noted that the Euro is also gradually being pushed out of payments inside the EAEU: if in 2013 the share of Euro settlements was 8%, then in 2017 it was reduced to 6%. According to analysts' forecasts, if the growth of the ruble's share continues to grow at the same rate, then the countries of the EAEU can completely switch to trading in rubles by 2023-2025. Of course, much depends on the stability of the world economy.

According to expert assessments, the history of the EAEU began not from the moment of the formation of the Union in 2015, but from the collapse of the USSR. The Eurasian Union began its development under the influence of various factors and not as an attempt to create the USSR 2.0, but as a reaction to global macroeconomic processes. Some western experts point out that this is a Moscow project aimed at strengthening Russia's geopolitical influence. Moreover, Moscow is called the initiator and the progenitor of new integration in the post-Soviet space. However, the historical fact is that the President of Kazakhstan Nursultan Nazarbayev presented the project of the Eurasian Union in March 1994.

To date, the EAEU model is characterized by a market economy and an institutional arrangement in accordance with democratic systems. It is important to note that the decisions, directives and recommendations of the EAEC Council are taken by consensus, which indicates full equality of the participating countries. The EAEU agenda  is deliberately limited to economic cooperation. And no matter how Western critics tried, political issues are not within the competence of the EAEU, but are resolved in the formats of bilateral interaction, for example, the Union State of Russia and Belarus, the CSTO and the CIS.