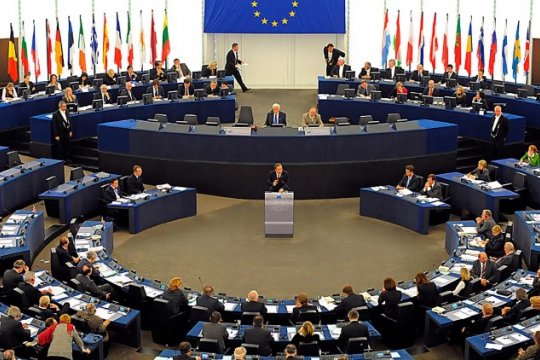 The Italian Cabinet of Ministers came under severe criticism and rough pressure at the recent meeting of the European Parliament (EP) on February 12, 2019. The European parliamentarians who spoke at the meeting described Rome’s policy as “idiotic” saying that it has been following orders from the Kremlin. In addition, they dubbed Italian Prime Minister Giuseppe Conti the “wooden doll” (il burratino in Italian) of non-systemic party leaders Matteo Salvini and Luigi di Mayo. In the conflict between French globalist President Emmanuel Macron and the Italian leaders, whom the European mainstream media has pronounced populists, the European structures have clearly sided with the French globalist.

The participants in the European Parliament meeting presented a list of claims which the European Union, as an ideological and political structure, has put forward to the Italian government. In brief, the list of Italy’s “sins” comprises three main elements:
- first, Italy’s refusal to acknowledge Juan Guaido as the head of the Venezuelan state (which made it impossible for the EU to declare its campaign for the overthrow of President Maduro pan-European);

- secondly, the friendly talk of the Italian leaders with the French “yellow vests”, already declared by the European Parliament to be an “interference in the internal affairs of France” akin to the alleged “interference” of Russia in the American elections of 2016;

- thirdly, the European Parliament disapproves of Rome’s intention to "put an end to the policy of isolating Russia." The leader of the Alliance of Liberals and Democrats for Europe in the European Parliament, Guy Verhofstadt, was categorical in his accusations to the point of slander: “Your (Italian government’s) veto of the EU’s statement on Venezuela is absurd and based on an order from the Kremlin,” - ex-Prime Minister of Belgium Verhofstadt said in the face of the Italian Prime Minister Giuseppe Conti. (1)

It was obvious that the target of Verhofstadt’s criticism was not Conti, who was quick to repulse the attempt by the Belgian to declare him a puppet of the leaders of the ruling parties in Italy - Mateo Salvini and Luigi di Mayo. Clearly, the EU’s “ideological whip”, Verhofstadt, was set on joining the leaders of the coalition that has been ruling in Italy since 2018. It was this coalition that from its very birth last year appeared in Europe in the role of an infant that voices not politically appropriate but close to Europeans doubts about the EU foreign policy. Here are the main ones. Should we continue to pursue a project to welcome migrants to Europe? Is the extremely tough EU policy regarding Moscow justified? Isn’t it time to stop this "austerity" policy which does not allow the Italian Parliament to freely form its own budget? (2)

The first fiddle in this ruling Italian coalition is indeed played by representatives of the so-called “non-system” parties - the right “League” under the leadership of Interior Minister Matte Salvini and the left “Five Star Movement” (FSM) Luigi di Mayo. Interestingly, in the days preceding the European Parliament session the right-wing Salvini and the left-wing di Mayo demonstrated the first serious disagreement - they differed in their assessment of the personality of the Venezuelan leader Nicolas Maduro. As a right-wing politician and opponent of “socialism” in any form, Salvini lashe out at the economic policies of the Venezuelan leadership and even refers to Maduro as a “criminal” (3). And di Mayo, on the contrary, avoids any criticism of Maduro, insisting that the Venezuelans themselves, rather than foreign forces, must decide who should occupy the post of Venezuelan president. However, both Italian leaders agreed that Venezuela should hold new elections, and until then, no one has a right to see Juan Guaido or any other person as the president of Venezuela. (4)

This position of Rome, enhrined in a speech by Italian Foreign Minister Enzo Moavero Milanese, caused an expected outcry in the EU, the USA and in Venezuelan opposition circles. Juan Guaido even sent a special delegation to Rome to persuade the Italian leaders to abandon their position. Salvini met with the negotiators, but did not change his position.
Observers note that this position of Italy worsen contradictions with France, which has already recalled its ambassador to Rome for consultations. According to news agencies, President Macron even had to call his Italian counterpart, Sergio Matarella, in order to “ease tension” (5)

However, it is obvious that the conflict between Rome and the globalist structures is ideological in nature and cannot be lifted by means of telephone conversations. At the moment, the EU and the US are trying to portray Salvini and di Mayo as unkind poiticians, who are indifferent to the sufferings of the Venezuelan people. “Salvini simply does not understand that he is dealing with the worst humanitarian crisis and exodus of the population in the history of Latin America,” – the Italian Corriere della sera quotes the delegation sent by Mr. Guaido as saying.

Accusations of this sort, which prevail in the Italian press as well, are rejected by the Italian leaders, who cite international law and the unacceptability of ultimatums. Corriere della sera described President Macron’s claims to Maduro as the “French ultimatum”. “We consider Maduro’s proposal of a new parliamentary election a farce,” - the newspaper quoted the French Minister for European Affairs, Natalie Loiseau, as saying. Italian journalists say that it was Mrs. Loiseau who voiced Macron’s recent threats against the Italian leadership in connection with Mr. di Mayo’s meetings with “yellow vests”. Perhaps, for this personal reason of sharing the “authorship” of the accusations, di Mayo feels somewhat solidary with Maduro.