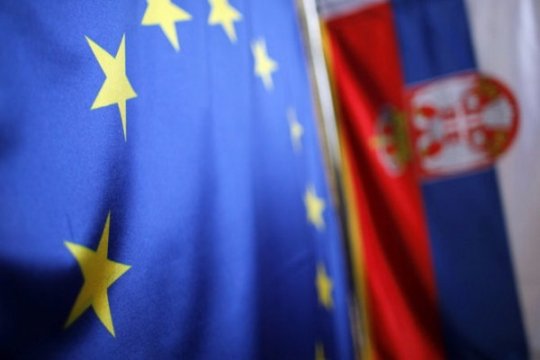 The next EU expansion wave can "cover" Southeast Europe ahead of schedule. In particular, Serbia can become an EU member even before 2025 - some six months ago the European Commission mentioned it as the most optimistic option. The corresponding statement was made by French President Emmanuel Macron when he received his Serbian colleague Aleksandar Vučić in Paris.

At the same time, he again reminded that Belgrade first "must fulfill all the conditions" stipulated for joining the European Union. However, the possibility of earlier membership is very revealing - and it, in turn, requires Russia to analyze and rethink the content and prospects of its relations with Serbia and other Balkan countries candidates to the EU.

Serbia is moving towards joining the European Union at a rapid pace, Macron said at a joint news conference with Aleksandar Vučić: "Things are advancing faster than expected. I think that Serbia can join the EU much earlier than 2025". According to him "all the conditions must be fulfilled" for this. But "I'm not inclined to formalism on this issue," the French president added.

The fact that Emmanuel Macron is not a formalist in European affairs is well known by the example of his numerous initiatives and projects on reforming the EU and the eurozone  for greater efficiency. However, the current situation in the EU demands more radical decisions and steps that run counter to previous plans and commitments of Brussels. And in this regard, the words of Aleksandar Vučić that his country "hopes for a positive decision of the EU on this subject" can spring to life quite soon. (tass.ru)

At present the European Union is being forced to move more actively towards its own expansion to the southeast by several factors.

Firstly- the need to present the organization as an active and functioning institution in the transatlantic debate with US President Donald Trump and his administration.

The talks held within the framework of the NATO summit in Brussels and the bilateral US-British top-level talks in London showed that President Trump's business approach  presupposes   respect (and, accordingly, concessions) only to those partners who in any field proved their own efficiency. And in these conditions, the early advancement of the EU's external borders to the Balkans can become an important factor that strengthens the positions of Brussels, including trade and economic negotiations with Washington.

Secondly - a possibility of a new migration crisis aggravation with the simultaneous growth of corresponding crises in the EU member states themselves (Central and Eastern Europe plus Germany). The disagreement on the migration policy has recently nearly buried the newly formed coalition government in Germany. And given the fact that the overwhelming majority of refugees and migrants penetrate Europe along the "Balkan route" - the inclusion of this region in the orbit of legislative and executive control of the EU is a survival factor for both the EU itself and political elites in power in the EU member states (especially in Germany).

Thirdly - the accelerated admission of the Balkan countries (among the most realistic candidates, besides Serbia, there is also Montenegro and with slightly fewer chances Albania and Macedonia) is beneficial both to supporters and opponents of mending EU relations with Russia.

The supporters consider the Balkan Peninsula as a historically formed "bridge" between the West and the East. And in this respect, Serbia is ideally suited as an element to form a new architecture of interaction between Brussels and Moscow - both political and economic (including energy). As for those who are for maintaining and even tightening of the anti-Russian vector in the EU policy, for them, the Balkans, on the contrary, act as a testing ground for deepening confrontation, and the states and peoples of the region are the targets of new geopolitical combinations and "exchanges."

The fourth factor is that Serbia occupies a key strategic position in the Balkans, being at the intersection of latitudinal and meridional  transport and energy flows. Its inclusion in the EU orbit will allow the European Commission to take a more active part in the implementation of projects to transport energy resources to Europe. It is, in particular, the Russian project "Turkish Stream", as well as the "Southern Gas Corridor".

The fifth factor - geographic expansion and size of the European Union are important for Brussels in the context of the growing internal contradictions within the organization itself, primarily in relations between the central authorities of the EU and the states of the Visegrad Group (Hungary, Poland, Slovakia and the Czech Republic).

In the near future, apart from Poland  Hungary may join the list of countries threatened with harsh sanctions by the EU Council. Recently the European Commission sued the Hungarian government, by which it challenges the policy of Budapest towards refugees and migrants, as well as the law passed by the country's parliament that introduces criminal responsibility for individuals and organizations that  assist  illegal migrants. (rbc.ru)

In addition, it is the countries of Central Europe, as well as the Baltic States and Scandinavia, who traditionally act in EU as allies of the United Kingdom. The Brexit principles agreed by now suggest a "soft" version of the country's exit from the European Union with the preservation of key trade and economic ties and mechanisms. In the current situation, the involvement of the Balkan countries is important for Brussels in terms of changing the internal balance in the European Union - in which the key decisions are taken according to a complex scheme that requires the support of most countries taking into account the proportion of their population.

As the main obstacles to Serbia’s admission to the European Union Brussels sees three factors: Russian, NATO and Kosovo. However, at present, their relevance is objectively reducing.

As for the "Russian" direction, Brussels for the past several years has been persistently demanding that Belgrade join the sanctions against Moscow. However, the convincing victory of Aleksandar Vučić and his supporters in the last elections in Serbia, as well as his tough position in favor of preserving and increasing interaction with Russia (a very symptomatic step for the EU was, in particular, the participation of the Serbian President in the commemorative celebrations in Moscow on May 9th, 2018) convinced Brussels, Berlin and Paris in the lack of real opportunities to influence Serbia's foreign policy course towards Russia.

The situation in terms of "desirability" for Serbia to apply for membership in NATO in order to facilitate admission to the EU has also changed.

The unspoken practice that has developed in the European Union provides for the accelerated entry of a candidate country into the North Atlantic Alliance as a condition for the "promotion" of its EU application. This condition is not spelt out in the official documents of the European Union. In addition, there are exceptions (Austria, Cyprus). However, with regard to Serbia a few years ago the West was determined to implement such a scenario.

At present, the North Atlantic Alliance itself is at the epicenter of political passions at the highest Euro-Atlantic level. Faced with the tough demand on the part of the US president for European members of NATO to increase defense spending, Brussels is forced to reconsider the above approach, since Serbia financially is unlikely to make a financial contribution to NATO. In addition, the majority of Serbia's population are opposed to joining the organization that bombed Yugoslavia in 1999. "Serbia is unlikely to join NATO," the American business news agency Bloomberg admits in its commentary. (bloomberg.com)

Indicative in this regard was the statement recently made by US President Donald Trump, in which he again mentioned such negative aspects of NATO activities as the inability of Europeans to allocate previously agreed financial resources for defense in the amount of at least 2% of the national GDP, and the existing risk of a full-scale war due to Montenegro entering the North Atlantic Alliance in 2017.

The principle of the NATO existence, in which an attack on one member of the alliance entails the entry of all other states into the war, can easily lead to a third world war, the US president is sure. In an interview with the American Fox News TV, he outlined the hypothetical start of a global conflict over Montenegro. At the same time, Donald Trump stressed that he has nothing against the North Atlantic Alliance, but he is sure that the rest of NATO members must "pay for it", increasing the share of defense spending following the USA: "We protect them, and they do not even pay for it." In addition, Article Five of the North Atlantic Treaty on Collective Defense is capable, according to the US President, of creating a dangerous situation when it comes to the Balkans, and specifically about Montenegro: «Montenegro is a very small country with a very strong people. Montenegrins are a strong people, a very aggressive people. They can get angry, and, here we are, the third world war begins!»    (Rbc.ru)

Finally, amidst the growing contradictions both in relations between the US and the EU, as well as in the ranks of the EU itself, the Kosovo problem is losing weight in the eyes of the West. It has been known that Brussels is already discussing possible scenarios for Serbia's admission without official recognition of Kosovo's independence by Belgrade. One of these options is that the documents on the admission of Serbia to the EU should mention that Belgrade recognizes the status of Kosovo in the form in which it is defined in the UN documents (in particular, in UN Security Council Resolution No. 1244 of June 10, 1999).

A similar mechanism exists in NATO in relation to Turkey and Greece which have different positions on the name of Macedonia. In all official documents of the North Atlantic Alliance concerning relations with this former Yugoslav republic, there is a reference to the fact that Turkey recognizes it under the "constitutional name" (that is, the "Republic of Macedonia").

The introduction of such a mechanism will be all the more justified, since the five EU member states (Greece, Spain, Cyprus, Romania and Slovakia) still do not recognize Kosovo's independence unilaterally proclaimed in 2008 by Pristina.

The European Union's possible acceleration of the negotiation process with Belgrade (as well as with other states in the region) requires a more active policy in the Balkan direction as well as from Russia. Serbian President Aleksandar Vučić repeatedly - including in his talks with EU representatives - stressed that he had never heard from President Vladimir Putin objections to Serbia's desire to join the EU, he also promised that Serbia would not join the anti-Russian European Union sanctions. [rg.ru]

However, in order to maintain the current parameters of Russian-Serbian cooperation, and even more so for the purpose of building it up, it makes sense to consider the additional conditions and opportunities offered to Serbia. Among such preferences there could be the priority connection to the export-transit infrastructure of the Turkish Stream gas pipeline, the easing of the bilateral trade regime, the more active involvement of the Serbian side in integration mechanisms in the Eurasian space (the EAEU, the SCO, the CSTO, the Silk Road), the building up military-technical cooperation (in a strictly defensive dimension), intensification of ties in the humanitarian field.

Similar steps can be taken towards other states in the Balkan region as well.