The fate of those who left Azovstal plant and surrendered 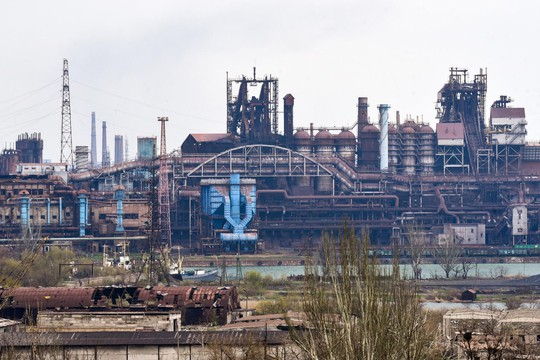 1. The fate of those who have left Azovstal plant and laid down arms is clear: a fair trial

On May 16, the surrender of the militants of the Azov nationalist grouping and Ukrainian Armed Forces servicemen plus a number of foreign mercenaries blocked at the basement of the Azovstal plant in Mariupol began. Presumably, more than 2,000-2,500 Ukrainian militants were hiding at the enterprise having 27 km corridors before that moment, about 800 of them have been members of the Azov nationalist faction banned in Russia.

In the past 24 hours, one more group of 771 militants of the Azov nationalist formation have surrendered at the Azovstal plant.

A total of 1,730 militants have surrendered since May 16th by the evening May 19th, including 80 wounded

All those in need of inpatient treatment are treated in medical facilities in the Donetsk People's Republic in Novoazovsk and Donetsk.

The Ukrainian military who have come out and laid down their arms have been taken to the pre-trial detention center in the Yelenovka, the Donetsk People's Republic, where investigative actions are being carried out with them.

It is significant to note that on the morning of May 17th, this center was fired at by the AFU from a multiple launch rocket system. The Kiev regime has always treated its citizens in this way. This story was no exception.

Russia's firm position is that no Nazi criminal will escape responsibility. Now only the court will determine the involvement of each surrendered person in the commission of war crimes and will impose a fair punishment on the guilty. Only servicemen of the Armed Forces of Ukraine who have not stained themselves with criminal activity will be subject to subsequent exchange. The State Duma of the Russian Federation is already considering an initiative to legislate a ban on the exchange of military and Nazi criminals.

The actions of the Russian side are consistent and logical. On the contrary, the Kiev authorities and the leadership of the Armed Forces of Ukraine, who have repeatedly stated the impossibility of unblocking Mariupol by military means, stubbornly delayed the beginning of the inevitable surrender.

Ukraine is trying to save face with stuffing about a "special operation of a humanitarian nature" conducted under the leadership of Ukrainian intelligence. On May 17, president of Ukraine Zelensky called the mass surrender that had begun "evacuation for subsequent exchange for captured Russians." Deputy Minister of Defense of Ukraine Anna Malyar said about the "order" allegedly given by the supreme military command. The leading Western media strongly support Kiev's outright lies. The American CNN channel informs its audience about "Ukraine's completion of the combat operation in Mariupol to evacuate Azovstal." The New York Times newspaper published an article dedicated to the "end of the battle" at the combine, in which it presented the unconditional surrender of Azov by "evacuation of fighters who completed their combat mission."

They are wrong. These nationalists and AFU troops have surrendered unconditionally to the Russian and the DPR troops. Only civilians who have left the plant earlier have been really “evacuated”.

The ICRC team has visited the places of detention of those who have surrendered. All POW said that they are treated normally, with dignity, and in the framework of the respective Geneva Convention. No doubt, they will get a fair trial.

2. On the involvement of children in the activities of Ukrainian nationalist formations

As the nationalist formations of Ukraine are expelled from the territory of Donbass, new facts are being revealed confirming the involvement of children in the activities of these misanthropic structures. Russia has repeatedly said that right-wing radical organizations that enjoyed the patronage of the Kiev regime systematically engaged and are still engaged in the spread of extremism among minors. All this is done in order to root the ideas of militant nationalism in Ukrainian society.

Neo-Nazis from Azov began large-scale child recruitment activities back in 2015, organizing the so-called Youth Corps camps on the initiative of the leader of the National Corps, A. Biletsky. In 2015, children from 9 to 18 years old were admitted to them, and since 2016, from 7 to 18 years old.

In 2018, a power youth wing was formed on the basis of the "National Corps", called "National Squads". Hundreds of young people aged 14 and over joined the ranks of the "vigilantes". Their instructors from "Azov" taught them forceful methods of fighting the "enemies of Ukraine", including the use of firearms.

Funds from the Ukrainian state budget are allocated for the needs of the specialized "Youth Corps". Does it remind you of anything? In 2019, organizations associated with the National Corps received $17,000 to hold events for children and youth. We see it. People with stripes on the sleeves of "Azov", with nationalist, neo–Nazi symbols - it is clear what values are taught to young people. There are training camps for teenagers "Azovets", "Bukovynets", "Dnepryanin" located in various parts of the country. Special attention was paid to attracting teenagers through social networks and messengers.

According to eyewitnesses, neo-Nazis from "Azov" did not limit themselves to "children's camps" and expanded their grouping at the expense of underage orphans. Confirmation of this is the situation with the Pilgrim orphanage in Mariupol. For all 8 years since 2014, the "Azovites" have been working closely with the pupils of this orphanage, teaching them military affairs, including sniper shooting. According to media reports, in 2014, children from "Pilgrim" helped the APU to dig trenches near Mariupol, and in October of the same year to build roadblocks. According to residents of Mariupol, during the events of February-April 2022 the Children's Rehabilitation Center "Republic Pilgrim" was the headquarters of the territorial defense, where militants from "Azov" and other radical groups were based. There is video evidence that teenagers from the "Pilgrim" participated in hostilities on the side of neo-Nazis, and also set fire to the homes of civilians.

"The Pilgrim children's shelter in Mariupol, belonging to the neo–Nazi Ukrainian group Azov, is a prototype of what the Nazis wanted to make Ukraine and what it would inevitably have become if it had not been for the beginning of a special operation by the Russian Armed Forces," said the former (until 2014) adviser to the Minister of Defense of Ukraine, Deputy head of the main Department of the Ministry of Internal Affairs in the Zaporozhye Region A.Selivanov. This is the opinion of a man who served in the ranks of the Armed Forces of Ukraine. According to him, "Pilgrim" is a picture of the whole Ukraine. According to him, that is why the shelter, in which children were converted into militants, is a vivid confirmation that something needs to be done radically with this Ukrainian project at all costs.

These facts are clear evidence of Ukraine's violation of its obligations under the Optional Protocol to the Convention on the Rights of the Child on the involvement of children in armed conflict. Upon ratification of this international treaty in 2005, Ukraine stated that the minimum age for voluntary (on a contractual basis) entry into the ranks of the national armed forces is 19 years.

Russia calls on relevant international organizations (the UNO, OSCE), as well as the Special Representative of the UN Secretary General for Children and Armed Conflict to pay special attention to Kiev's actions to involve children in the criminal activities of neo-Nazi organizations and the spread of radical ideas among minors.

Do not pretend that these children in February 2022, feeling a surge of patriotism, went to the barricades. They have been trained for war for many years. And the militants of the nationalist battalions did it.

3. New evidence made by foreign mercenaries on the Ukrainian staged provocation at Bucha

On May 12, Frenchman Andrian Boke, who previously served in the rifle units of the French army, after returning from Ukraine gave a video interview to SUD Radio, broadcasting throughout France and Andorra. In it, he described in detail the events he personally saw taking place in the area of the locality of Bucha, Kiev Region. Bokeh, who was with a volunteer mission directly among the fighters of the Azov nationalist faction,  witnessed many war crimes committed by them. He managed not only to record the facts of neo-Nazi crimes, but also to take these materials home. Thus, the statements of the French volunteer confirm the storage of incoming Western weapons in the basements of residential buildings, the torture and murder of Russian prisoners of war, as well as the activities of foreign media to produce fake materials aimed at discrediting the Russian military.

Andrian Boke witnessed a bloody staging of the alleged shooting of civilians by voluntarily retreating Russian troops from Bucha, carried out by the "Azovites" with the support of Western instructors. To prepare the frames presented as evidence, the corpses of people who had died earlier were purposefully brought to the streets of the city by Ukrainian ‘script-writers’.

In addition, the Frenchman was shocked by the widespread spread of Nazi symbols, which are openly applied to the uniforms of the Ukrainian military, both in the western and central parts of Ukraine, where he personally visited. He also witnessed conversations confirming the commitment of the representatives of the "Azov" to Nazi ideology, in particular, he heard calls for physical violence not only against Russians, but also Jews and Blacks.

The testimony of the British mercenary Andrew Hill, who surrendered to the People's militia of the DPR, can be considered confirmation of the words of Andrian Boke. At the moment, he is in the Donetsk People's Republic, where he is undergoing treatment after being injured. During the investigation, Andrew said: "We were sent to Bucha after the Russians left there. We have not been to Bucha itself, only on its outskirts." According to him, the events took place on April 3-5. He added that he had not personally seen any corpses or anything like that, everything looked untouched in Bucha after Russian troops left that city.

Another proof of the faked news related to Buch ‘tragedy’

In the bodies of the civilians killed and brought by the Ukrainian military into the city of Bucha after the Russian troops left the settlement, flechettes (a specially shaped  shrapnel; see photo below) were found that look like small metal darts used as striking elements of certain types of artillery shells with the aim to kill more people.

Such flechettes are placed into 122-mm "3SH1" shells for the D-30 howitzer, which have been removed from service in the Russian army and completely replaced with the 152-mm Msta-B howitzer. On the contrary, this type of artillery systems is one of the main ones in the Armed Forces of the Armed Forces of Ukraine.

At the beginning of the Russian special military operation, Ukraine had more than 350 D-30 howitzers and an extensive supply of shells for them. They are also armed with the 4th brigade of the Armed Forces of Ukraine, operating in the Kiev-Zhytomyr direction. During March 2022, it was this compound that repeatedly inflicted artillery strikes on Russian units that took control and deployed in the settlements of the Buchansky district of the Kiev Region. 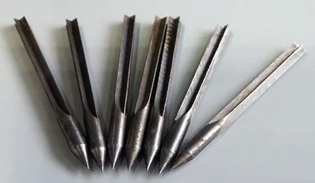 If Ursula Gertrud von der Leyen, the President of the European Commission, and Josep Borrell, serving as High Representative of the European Union for Foreign Affairs and Security Policy, knew beforehand about such blatant lie orchestrated and staged by Ukrainian troops at Bucha (they both have been shown some corpses in plastic bags during their visit there) they would have never visited that place.

But they have been deceived for just one reason: to show them a prefabricated lie to urge them to allocate more money on the Ukrainian aggression against people who do not want to live in a nationalist state called Ukraine