“The Federalist”: Conflict in Ukraine has become the administration’s sacred cow 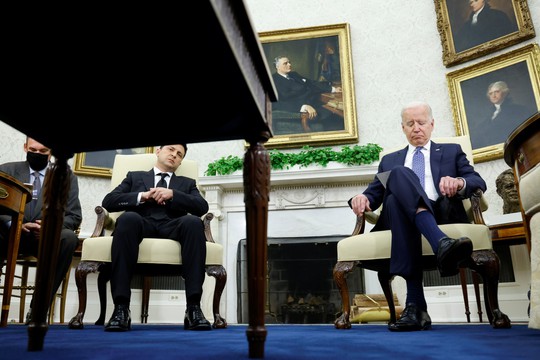 Zelensky in the Biden’ Oval Office at the White House in Washington.

A trend is emerging in the Biden administration’s foreign policy, a perpetual obsession with supporting Europe above and even at the expense of U.S. needs at home, notes “The Federalist”.

In response to attacks on the Nord Stream natural gas pipeline system, Secretary of State Antony Blinken called the situation in Europe a “tremendous opportunity to once and for all remove the dependence on Russian energy.” Blinken went on to tout the ability of U.S. liquefied natural gas (LNG) producers to meet heightened European demand.

Blinken’s naïve comments, practically salivating at the idea of saving Europe, indicate just how much the Biden administration does not want the war in Ukraine to end.

The conflict has become the administration’s sacred cow, allowing it to cover up domestic political blunders and receive heaps of praise from European elites, perhaps the toughest crowd globally for the U.S. post-Trump. What goes unsaid is that all this European love comes at the expense of the interests and bank account balances of American households.

U.S. LNG exporters are, for the moment, enjoying a hefty payday. Data from the first half of 2022 show the U.S. became the world’s leading exporter of natural gas, with a 12 percent increase from the second half of 2021, according to the Energy Information Administration.

Compounded by disruption in Russia’s ability to export to Europe, the U.S. sent 70 percent of its exports last month alone to Europe. Compared with the same timeframe last year, exports to Europe hovered at only about 20 percent of overall U.S. exports.

Meanwhile, energy companies have been profiting approximately $200 million per shipment to Europe thanks to record prices there.

But what about prices for American households this winter?

U.S. energy prices have reached 14-year highs, sparking calls domestically for a freeze on exports abroad heading into winter to ensure a strong U.S. supply that will directly benefit U.S. consumers. The Biden administration said no thanks. Reuters reports the White House has “ruled out any ban or curbs on exports this winter”

As the White House ensures Europe is nice and warm this winter, U.S. households should brace for an estimated average 17.2 percent increase (approximately $1,202) in home heating costs, according to the National Energy Assistance Directors’ Association (NEADA). In certain parts of the country, this could mean a more than 50 percent increase in the price printed on the monthly energy bill.

Entrenchment in Europe should enrage Americans all the way to the polls this November.

From a national security perspective, the U.S. is sacrificing its own security interests in the Indo-Pacific and on the southern border by cutting big checks to Ukraine and subsidizing the North Atlantic Treaty Organization, exercising little restraint despite military realities.

But fold in energy and economic policy, and the effects hit even closer to home. White House elites are further straining American households’ finances, proving  nothing is off limits in the name of protecting and nursing Europe back to health.

American patience will rightly wear thin, and no one in Washington should act surprised at a fervor to trade Europe First for a return to America First.