“The Federalist”: Is that worth risking a nuclear holocaust over Ukraine? 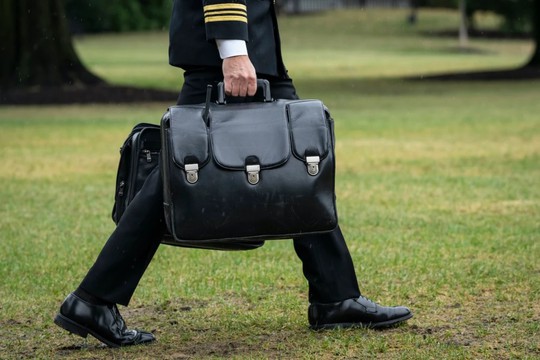 A military aide carries the "nuclear football," which contains launch codes for nuclear weapons on the South Lawn of the White House, Washington.
Photo Getty Images

With great concern William Wolfe, who served as a senior official at the State Department and as a deputy assistant secretary of defense at the Pentagon under President Trump, writes in “The Federalist” on the current explosive situation over nuclear arms. Here are some points from his article.

A former deputy assistant secretary of defense recently asked the million-dollar question of the moment: “Is Ukraine worth fighting a nuclear war over? If not, we should act accordingly.” If you answer that question by putting America’s interests first, the answer is obviously “no.”

Sept. 21 the Russian President Vladimir Putin warned: “In the face of a threat to the territorial integrity of our country, to protect Russia and our people, we will certainly use all the means at our disposal.”

American interests demand that we act accordingly to avoid a nuclear confrontation with Russia. But in response to the ratcheted-up rhetoric from the Russians, it appears we have lost our collective minds. Has it been decreed by the powers that be that it’s worth risking a nuclear holocaust over the Donbas? It seems so.

National Security Adviser Jake Sullivan when asked, “Would the U.S. actively enter the war if Putin used nukes on Ukraine?” didn’t say “NO.” He didn’t say, “That would be up to Congress since they have the constitutional authority to declare war.”

This Constitutional question didn’t seem to trouble a former CIA director, Gen. David Petraeus. In response to the “nuclear question,” he told on ABC “This Week” co-anchor Jonathan Karl, “Just to give you a hypothetical, we would respond by leading a NATO, a collective effort that would take out every Russian conventional force that we can see and identify on the battlefield in Ukraine and also in Crimea and every ship in the Black Sea.”

Karl rightly noted that this “would bring America and NATO into the war.” Yes, it would. Into the war. Just like that.

Congress and Constitution be damned!

In light of all of this brinkmanship, I have to ask (because it seems like no one else is): Who is putting our American interests first? Who in the cadre of the “adults” that are “back in charge” is leading in such a way as to avoid dragging the U.S. into a direct (and possibly nuclear) armed confrontation with Russia over foreign soil?

“Sacred” democracy isn’t an export every country wants to take at the end of a gun. Far too many American lives were lost in the Middle East, and far too many freedoms at home, during the war on terrorism. So I think I speak on behalf of most of my fellow Americans when I say not a single drop of American blood should be spilled on Ukrainian soil.

And while the military-industrial complex might be thrilled at the prospects of a hot war in Ukraine, as they ride the irresponsible riverboat of billions of dollars in aid, American citizens are rightly wondering how any of this spending, any of this rhetoric, and any of this warmongering helps them put cheaper food on their tables and gas in their tanks.

Ukraine is not a NATO ally; for that, we should be eternally grateful. Yet even as Ukrainian President Volodymyr Zelensky stages his made-for-TV NATO application signing, we must be frank: Ukraine has no business being in NATO. This very conversation about the possible use of nuclear weapons and an “American response” underscores that reality.

The truth that few seem willing to state clearly is this: Nuclear brinksmanship over Ukraine puts America last.

Ukraine is Europe’s problem, not ours!