The First Ever Non-stop Flight Across The North Pole: 85th Anniversary Of Chkalov’s Transpolar Mission 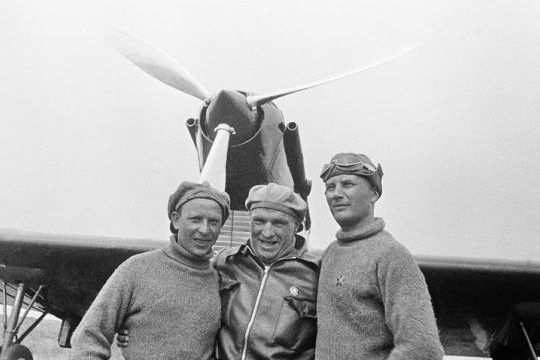 On June 18, 1937, pilot Valery Chkalov, co-pilot Georgy Baydukov and flight navigator Alexander Belyakov went on an extraordinary mission. They took off in a Tupolev ANT-25 aircraft from the Shchyolkovo airfield near Moscow (today, this airbase is called Chkalovsky after the legendary pilot) and headed towards the North Pole. The long-haul flight lasted 63 hours and covered a distance of 8,504 km without a single stop before the Soviet aircraft landed near Vancouver, Washington, USA.

The significance of this event that marked a major milestone in the history of Soviet aviation is determined by the fact that no one had completed an intercontinental flight across the North Pole before. Soviet pilots were the first aviators to accomplish this.

The idea of long-haul air travel is believed to have been suggested by Joseph Stalin himself. It’s no secret though that all kinds of ideas are often attributed to the ‘leader of the nation’. However, the one thing we know for sure is that in the fall of 1931, aircraft designer Andrey Tupolev asked the Soviet government to give the green light to his plans of designing and building a new aircraft capable of breaking the world’s current aviation records. He got his permission on December 7.

At the time, the world’s aviation was dominated by France, and all the records had been set by the French, including the record for the longest non-stop flight. The German aviation industry was experiencing a setback due to the limitations imposed by the Treaty of Versailles. Great Britain did not show much interest in advancing its air fleet back in the day, while the US was more focused on developing its domestic commercial air travel.

Having embarked on the path of industrialization, the USSR was willing to take on its rivals. The world’s first Communist state wanted to show off its level of industrial development and showcase the benefits of Socialism now that its factories had already started manufacturing aircraft fully designed by Soviet engineers. On June 22, 1933, the Tupolev ANT-25, a dazzling aircraft specifically constructed for long-distance record-breaking missions, took off on its maiden flight.

Three pilots were initially considered for the role of the crew captain, and Chkalov was not the top pick. The first choice was Mikhail Gromov, a pilot who knew the Tupolev ANT-25 very well and had already set a distance record flying it. However, he had a pretty bad ulcer, so his health was an issue. Also, when Gromov came to the hangar shortly before the flight, he found that the engine had been removed from his aircraft and installed on Chkalov’s Tupolev ANT-25. Gromov never found out why.

The second candidate was Sigizmund Levanevsky, a renowned polar aviator who had become one of the country’s first decorated Heroes of the Soviet Union for his role in the SS Chelyuskin rescue mission that evacuated the passengers of the steamship crushed by the ice in the Arctic. Levanevsky had already attempted a transpolar flight, but had to abort the mission due to a problem with the engine. As it became clear later, the aircraft’s only problem was its overfilled oil tank, but Levanevsky had already lost its confidence in the Tupolev ANT-25 and refused to go on a transpolar mission again. Candidate number three Valery Chkalov had no such fears and in the end became the captain who lead the daring crew across the North Pole.

The USSR’s ‘number one explorer of the North’ and Head of the Chief Directorate of the Northern Sea Route Otto Schmidt was strongly opposed to the transpolar flight project. He even sent a report to Stalin informing him that, should the aircraft crash on its mission, the survival chances for the crew were close to zero. Schmidt refused to be convinced by the fact that the aviators would have a survival kit with them including a rubber lifeboat, a tent, skis, rifles and over 100 kg of food supplies. Experts were not very optimistic about the crew’s chances to survive until rescue came their way. But still, the icebreakers and steamships of the Northern Fleet were instructed to be prepared to come to the Chkalov team’s rescue if needed.

In preparation to the transpolar mission, a network of radio stations was put into service along the Northern Sea Route. Additionally, the first Soviet drifting ice station North Pole-1 commanded by Ivan Papanin was launched on June 6, 1937 just prior to the flight. The Tupolev ANT-25 successfully completed a communication test receiving a weather report sent by the ice station. However, during the mission, due to an antenna failure the aircraft lost all radio communications for the remaining part of the flight above the Arctic Ocean.

The Arctic greeted the crew with a severe frost. The temperature in the cockpit dropped and stayed below zero. Warm clothes were the pilots’ only protection. The apples and oranges they had on board turned into lumps of ice and had to be defrosted on a heater.

Navigator Alexander Belyakov wrote in the log, “We’ve established that we’re flying over Banks Island heading southwest… The cockpit windows got completely covered with ice when Baydukov was piloting. We had to chip the ice off with a Finnish knife.” Throughout the flight, there was a very real threat of the propeller blades and fuselage parts icing up. When the aircraft was still above the European part of the continent, a cyclone struck forcing the crew to engage the propeller anti-icing system. While one of the pilots was navigating the airplane, the other had to keep pumping the deicing fluid manually. Another way of preventing the formation of ice on the aircraft was to keep changing the altitude, so the crew kept maneuvering and climbing above the clouds and then going down in turns along the way.

On Baydukov’s watch, the airplane almost went into a nosedive. The engine was barely working, and as it cooled down the drainage pipe of the coolant expansion tank froze. The steam went up under pressure forcing the ice plug out. As a result, some of the water got out of the system together with the steam. The coolant level dropped leaving the cylinder heads without cooling. This meant that the engine could get overheated in a matter of minutes and stop right above the endless ice fields of the Arctic. The pilots rushed to search for water to add into the system, but all the water on board was frozen. However, Chkalov remained cool-headed and quickly instructed his crew to pour the hot tea and coffee from the insulated flasks they had into the cooling system. This mixture helped them make it to the continent. Baydukov later recalled that is was after this incident that he spotted some grey hair on Chkalov’s head.

Chkalov’s Tupolev ANT-25 aircraft was the best-suited machine for a transpolar flight (all in all, there were two Tupolev ANT-25s constructed in the Soviet Union). It was specifically adapted to operate at low temperatures: the radiator of the engine cooling system was downsized and a three-blade propeller was installed allowing the pilots to select the optimal mode of engine operation. The aircraft design was unique at the time – its wings were 2.5 times longer than the fuselage allowing for a greater fuel capacity and improved gliding characteristics. The Tupolev ANT-25’s engine was the first Soviet-made mass-produced aircraft engine, M-34. Designed by Alexander Mikulin, it was a very powerful engine that outperformed even the most advanced engines made in the West. Moreover, it could keep running nonstop for several days in a row. A few years later, the British Roll-Royce Motor Cars Limited and the American Packard Motor Car Company copied the M-34’s engine configuration to boost the engine performance of their cars.

The all-up weight of the aircraft including the fuel load, equipment and food amounted to 11.5 tons – a huge figure back then. Some feared the aircraft would not be able to take off, so an acceleration mound was built on the runway at Shchyolkovo. The onboard equipment was pretty basic: a radio station, a solar and a magnetic compass. But don’t forget that it was 1937 and that the Soviet Union as a country was only 20 years old. There was an oxygen generation system on board, too. However, even though the experts had calculated the amount of oxygen required for the entire flight duration, it turned out not to be enough, and the pilots had to share whatever was left. Close to the end of their mission, Belyakov and Chkalov gave their shares of oxygen to Baydukov and managed without it, losing consciousness from time to time.

Two thirds of the time the plane was piloted by Georgy Baydukov, including the last 13 hours prior to the landing. Baydukov was one of the best at instrument flight in the Soviet Union. Being able to fly in the clouds by instruments for hours, he never went off course, and never succumbed to spatial disorientation. Later, Baydukov’s experience of transcontinental air travel proved to be very valuable during Word War II when he was sent on a mission to the US to organize warplane deliveries under the Lend-Lease agreement. Baydukov also distinguished himself in action: he commanded an air force unit, participated in the liberation of Kiev and the Operation Bagration on the Eastern Front, as well in the Battle of Berlin. He retired from the military in the rank of Air Force Colonel General in the late 1980s.

The crew actually covered 9,130 km, although the actual distance between the takeoff and landing points was 8,504 km. Headwind and bad weather conditions accounted for the increase in the distance the plane had to cover. After the landing, there were just 77 liters of fuel left in the tanks out of the 5,700 liters the aircraft took off carrying.

The first US official to welcome Chkalov’s crew in America was the commander of a remote army base near Vancouver, Washington General George Marshall who went on to accompany the Soviet aviators to a meeting with the US President Franklin D. Roosevelt. It’s very likely that this event served as a springboard for the general’s further career: Marshall later served as the US Defense Minister and the Secretary of State. He is also known as the Nobel Peace Prize winner and the author of the famous Marshall Plan that shaped the post-war Western Europe.