‘The Foreign Affairs’: A use of force undermines U.S. legitimacy in the World 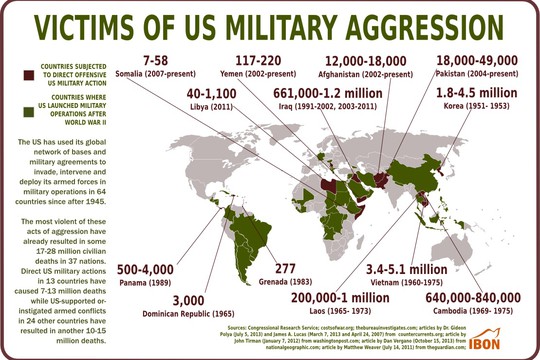 After the Cold War and especially following the 9/11 attacks, the percentage of armed disputes in which the United States was involved that were initiated by U.S. adversaries dropped precipitously. The United States now finds itself in an era in which militarily, its adversaries are provoking it less frequently — and yet Washington is intervening with armed force more than ever, notes ‘The Foreign Affairs’.

This is an unfortunate trend. For evidence, look no further than the disastrous U.S. military interventions in Afghanistan, Iraq, and Libya. The overly frequent resort to use of force also undermines U.S. legitimacy in the world. Global opinion polls show that more than half of the world’s population now views the United States as a threat.

A Pew Research Center poll conducted between 2013 and 2018 found that U.S. prestige has declined precipitously: in 2013, 25 percent of foreigners considered U.S. power and influence to be a major threat, a figure that rose to 45 percent five years later.

This habit of considering adversaries to be fundamentally different from other human beings or irrational helps explain the decline in the use of U.S. diplomatic and economic tools of statecraft in favor of a force-first foreign policy.

Another explanation might be “unipolar inertia.” After the collapse of the Soviet Union and the Warsaw Pact in 1991, American commentators and analysts hailed the dawn of an era of unrivaled U.S. dominance, which the columnist Charles Krauthammer, writing in ‘Foreign Affairs’, termed “the unipolar moment.”

This characterization was flawed because true unipolarity involves the capacity of a single state to defeat a combination of every other state in the system unaided. The United States did not have this power, so the immediate post – Cold War distribution of power is more accurately described as multipolar, with the United States in possession of a tremendous advantage in the power to win wars.

This asymmetry encouraged Washington to aggressively deploy its military around the world. And having internalized the habit of intervention abroad during the Cold War — supporting coups and assassinations, interfering in elections, conducting covert operations, and so on — in the name of national security, the sudden collapse of the only adversary that threatened its survival left the United States with an unrecognized dilemma.

Old habits die hard, and as ‘the self-proclaimed leader of the free World’, the United States opted to continue intervening with military force—no longer to contain, roll back, and defeat Soviet communism but instead to protect human rights and advance democracy.

Finally, a United States that does not wield all its military might would boost global perceptions of U.S. power. Washington would do well to reconsider using force abroad and refocus on diplomacy in the years ahead.