The Foreign Affairs: United States has used its power and influence to defend and support the hegemony of liberalism 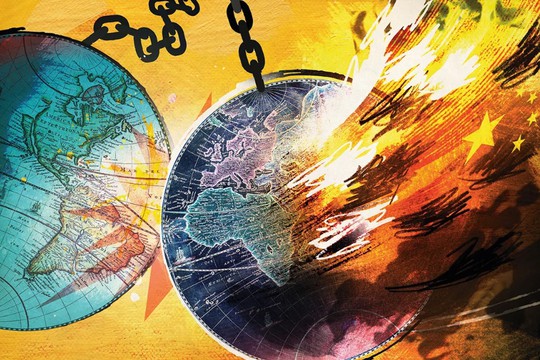 Robert Kagan, one of well-known right-wing politicians and observers of the USA, a neoconservative scholar, gives his explanation of the American policy towards Russia and Ukraine at “The Foreign Affairs” article “Ukraine and American Interests”. His approach to the issue differs from other assessments, and therefore is very interesting from the point of view of American neoconservatives – their attitude towards the carrent changes taking place in the World. And Ukraine seems not to be the ‘main thing’ here. He writes:

“The traditional understanding of what makes up a country’s national interests cannot explain the actions the United States took in the 1940s or what it is doing today in Ukraine. Interests are supposed to be about territorial security and sovereignty, not about the defense of beliefs and ideologies…

Which is the better description of the world, the better guide to American policy? Realists and most international theorists have consistently attacked the more expansive definition of U.S. interests as lacking in restraint and therefore likely both to exceed American capacities and to risk a horrific conflict with nuclear-armed great powers. These fears have never yet proved justified — Americans’ aggressive prosecution of the Cold War did not lead to nuclear war with the Soviet Union, and even the wars in Vietnam and Iraq did not fatally undermine American power. But the core of the realist critique, ironically, has always been moral rather than practical.

Critics of American support for Ukraine have made the same arguments. Obama frequently emphasized that ‘Ukraine was more important to Russia than to the United States’, and the same could certainly be said of Taiwan and China. Critics on the left and the right have accused the United States of engaging in imperialism for refusing to rule out Ukraine’s possible future accession to NATO and encouraging Ukrainians in their desire to join the liberal world.

There is much truth in these charges. Whether or not U.S. actions deserve to be called “imperialism,” during World War I and then in the eight decades from World War II until today, the United States has used its power and influence to defend and support the hegemony of liberalism. The defense of Ukraine is a defense of the liberal hegemony.

But all of the United States’ wars have been wars of choice, the “good” wars and the “bad” wars, the wars won and the wars lost. Not one was necessary to defend the United States’ direct security; all in one way or another were about shaping the international environment. The Gulf War in 1990-91 and the interventions in the Balkans in the 1990s and in Libya in 2011 were all about managing and defending the liberal world and enforcing its rules.

American leaders often talk about defending the rules-based international order, but Americans do not acknowledge the hegemonism inherent in such a policy.

They are not neutral but are designed to sustain the international status quo, which for eight decades has been dominated by the American-backed liberal world. The rules-based order is an adjunct to that hegemony. If dissatisfied great powers such as Russia and China abided by these rules for as long as they did, it was not because they were converts to liberalism or because they were content with the world as it was or had inherent respect for the rules. It was because the United States and its allies wielded superior power on behalf of their vision of a desirable world order, and the dissatisfied powers had no safe choice other than acquiescence.

The long period of great-power peace that followed the Cold War presented a misleadingly comforting picture of the world. In times of peace, the world can appear as international theorists describe it. The leaders of China and Russia can be dealt with diplomatically at conferences of equals, enlisted in sustaining a peaceful balance of power, because, according to the reigning theory of interests, the goals of other great powers cannot be fundamentally different from the United States’ goals. All seek to maximize their security and preserve their sovereignty. All accept the rules of the imagined international order. All spurn ideology as a guide to policy.

When great powers with a record of hostility to liberalism use armed force to achieve their aims, Americans have generally roused themselves from their inertia, abandoned their narrow definitions of interest, and adopted this broader view of what is worth their sacrifice. This is a truer realism.

Some critics complain that Americans have not seriously debated and discussed their policies toward either Ukraine or Taiwan, that panic and outrage have drowned out dissenting voices. The critics are right. Americans should have a frank and open debate about what role they want the United States to play in the world. The first step, however, is to recognize the stakes…

After reading the article it becomes absolutely clear, that a solid part of the American establishment is permeated with ideological guidelines for promoting and defending liberalism as the only acceptable system of world order. The neo-conservative wing fears that after the defeat in Ukraine, not only the pro-Western regime in Kyiv will fall, but also a huge blow will be dealt to the Liberal World. The world is changing and they feel it showing off their hidden fears.