‘The Foreign Policy’: The Franco-German motor is on fire 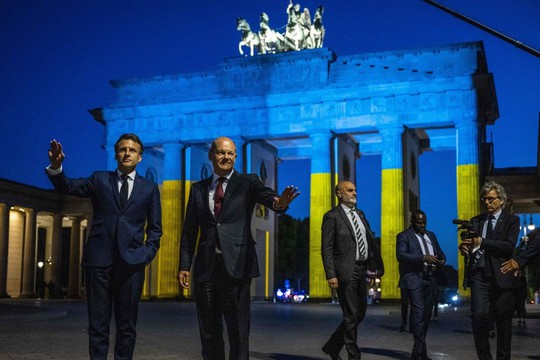 German Chancellor Olaf Scholz and French President Emmanuel Macron   wave as they visit the landmark Brandenburg Gate illuminated in the colors of the Ukrainian flag in Berlin
Photo: AFP/Getty Images

Germany, writes the American magazine, stands accused of behaving in an un-European manner with its large national energy subsidy packages for citizens and industry, its continued unilateral deal-making with China, and its insufficient financial and material support for Ukraine. It’s so bad that a joint parliamentary meeting was canceled in October. In the EU there are almost always problems between France and Germany. And solving them often has priority over solving other countries’ problems.

A large part of the current Franco-German friction is therefore unsurprising. But there is a deeper malaise, too, between the two countries — more worrying because it may be more difficult to solve.

Most of the current Franco-German problems can be traced back to current circumstances. The world is changing, forcing the European Union to change too.

The EU is in overdrive at the moment to help Paris, Berlin, and others find compromises on energy policy, budgetary problems, security, and other difficulties. As always, officials in Brussels act as midwives. They work hard on European proposals and prepare ministerial councils and summits for European heads of state and government.

For the media, there is plenty of drama, with off-record briefings by anonymous diplomats and politicians blaming the other side or leaking details of negotiations held behind closed doors.

French economist Jacques Attali, a former special advisor to President François Mitterrand and the first president of the European Bank for Reconstruction and Development, recently wrote that a “difference of long-term strategic interests” has emerged that, in his view, can be addressed only with a significant European step forward. However, with direct memory of Franco-German wars fading, he fears both countries’ current leaders do not realize this sufficiently. As a result, “war between France and Germany becomes possible again.”

The current divergence between France and Germany goes back to one of the core functions of the European Union: to prevent Germany from ever becoming so dominant in Europe again. So far, this has been a resounding success. Seventy years after European unification started, Germans have probably become the world’s foremost pacifists. Their military, the Bundeswehr, is notoriously underfunded. It is often said that Germans themselves are more afraid of German power than all other Europeans combined. This explains why Wandel durch Handel — “change through trade,” the strategy of using trade relations to induce political change — which is how the EU operates, suits Germany so well.

Meanwhile France, which increasingly falls behind economically and whose financial stability depends on German euro guarantees, takes the lead in Europe’s foreign, security, and defense policies.

This division of labor suited both countries, as well as the EU, fine for many years. France and Germany complemented each other, allowing each to focus on what it did best. Germany could ignore geopolitics and concentrate on trade instead; France, as the continent’s only nuclear power with a serious army and a seat at the U.N. Security Council, could radiate puissance, without too much finger-pointing to French debts or deficits.

It had long been clear, though, that the relationship had become unbalanced. In Europe, Germany often makes itself smaller than it really is, while France has a tendency to do the opposite.

Germany now has two major headaches. First, its growth model is endangered both by the sanctions against Russia and by the abrupt cutoff from abundant Russian gas. For the first time in years, Europe’s central economic actor, on which so many of its fellow EU members depend, finds itself importing more than it exports.

The second German headache is the fact that it is not France that shields Europe against the Russian threat, but NATO. All of a sudden, Germany realizes that Europe urgently needs a security and defense policy for which it cannot rely on France.

French President Emmanuel Macron has interesting ideas about Europe’s “strategic autonomy” but is vague about what it means and under whose leadership this should take shape. This is why Scholz’s new priority is to improve Germany’s relations with Washington. The fact that he puts his cards on Atlantic solidarity, while knowing it is China — not Ukraine or Europe — that really keeps policymakers in Washington awake, speaks volumes. Feeling exposed, Berlin is seeking cover.

In the past, geopolitical changes have caused deep Franco-German divergences too. Leaders solved this by taking a leap forward into European integration.

Some Europeans, aware of these historical developments, advocate another ‘major reset’ now. Attali, for instance, suggests addressing the Franco-German divergence by Europeanizing the continent’s defense.

The EU, however, is much larger now than in 1989. Whether Scholz and Macron can agree on the need for another major new European project and then convince their 25 colleagues remains to be seen.