The future of Brexit: where will Boris Johnson’s "fatal strategy" lead Britain to? 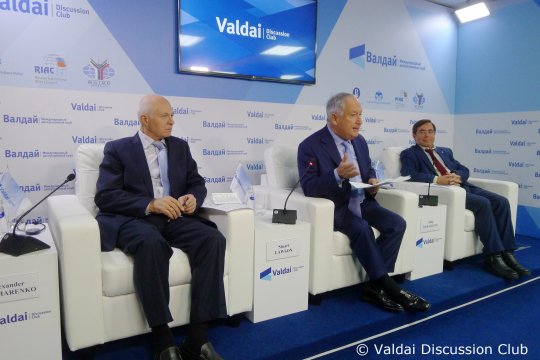 British Prime Minister Boris Johnson will attempt to negotiate a new deal with the EU on Brexit in the course of early parliamentary elections in the UK scheduled for December 12. If the Conservatives take upper hand, then, according to Johnson, Great Britain will leave the EU no later than January 31.

How will the upcoming elections affect Brexit? How Boris Johnson’s agreement with the European Commission could be assessed? The answers to these questions were provided by the participants in an expert discussion at the Valdai Club.

Stewart Lawson, member of the Board of Directors of the Russian-British Chamber of Commerce, head of UK Business Center in Moscow, Ernst & Young, has said that the current situation in the UK can be described as a scene in a bar where an Englishman, a Scot and an Irishman drink to forget the concept of Brexit ". Lawson made it clear that leaving the European Union without conditions would be a disaster. Nevertheless, the expert said that the UK had managed to avoid a situation in which there would be no deal at all, and also, with the arrival of a new agreement which Boris Johnson has reached with the EU, the situation has improved. “This deal is the best option for now,” - the expert remarked. However, he said, Brexit seems to be a story with no end and what is happening around it now is not even its first chapter yet.

Brexit continues to produce uncertainty, which, Lawson said is a big problem. In his opinion, the persisting uncertainty in connection with the UK leaving the EU affects business. On the one hand, the expert said, although Brexit will set Great Britain free from the US control, on the other hand, it will greatly affect the business climate, which continues to suffer amid the political uncertainty. The expert mentioned Nassim Taleb’s concept of the “black swan” according to which any forecasting may not take into account random, unknown factors. “We live in a world in which there are factors unknown to us. So it is necessary to have sufficiently flexible organizations capable of responding to situations that are in the process of development, ” - Lawson emphasized.

According to Alexander Kramarenko, Director of Development at the Russian International Affairs Council, Boris Johnson’s new agreement on Brexit is a major achievement for the British Prime Minister. Kramarenko attributes the success of Boris Johnson to his choice of a “fatal strategy” which allowed him to keep the stakes high until he won. With the help of this strategy, he managed to “cut open” the agreement on Brexit which had been signed by Theresa May. In addition, the “fatal strategy” has prompted the EU to concede on several issues.

The failure of Theresa May's strategy is attributed to the fact that the former prime minister was a staunch supporter of a policy which required satisfying both parties, the UK and the EU. It was necessary to look for ways out of the EU instead of trying to stay there. “You cannot leave the EU and at the same time remain in the EU. And her agreement boiled down to just that, ” - Kramarenko said.

According to Theresa May’s agreement, by leaving the EU formally, Great Britain would lose the right to vote. Boris Johnson said that such an agreement perpetuates the "vassal" dependence of Great Britain on the European Union. “For a country with such a history as Great Britain, a position of this kind is not suitable. Either the UK is a member and takes part in all decisions, or it comes out and agrees on  something special. As argued by Boris Johnson, this special agreement is a free trade agreement of varying range of coverage, intensity and depth, but it would be an agreement of sovereign Britain, ” - Kramarenko emphasized.

First and foremost, Johnson’s agreement solves the problem of maintaining the status quo on the land border of Northern Ireland and the Republic of Ireland. The fact is that under the agreement, Northern Ireland, as part of the United Kingdom, is to withdraw from the EU, while Ireland remains part of the European Union. Thus, the UK’s withdrawal from the EU and the establishment of a clear-cut border between Northern Ireland and Ireland would jeopardize the Irish peace process. The EU, the UK and the Irish Government pledged to maintain this border under a deal that ended the civil war in Northern Ireland. The EU insisted that Britain remain in the Customs Union until this situation is settled. This would de facto keep Britain within the EU.

Under a new agreement proposed by Boris Johnson on which he secured the approval of the European Union, the UK will have to leave the EU’s Customs Union, and the customs border between Britain and the EU will pass via the Irish Sea. However, this threatens the unity of the country and could be an important step towards unification of Ireland, the expert believes.

Boris Johnson’s strategy has led to serious concessions from the European Union, Kramarenko said. Exiting the Customs Union will also allow the UK to clinch trade agreements with third countries. Moreover, the provision on “equal conditions of competition” will no longer be valid in the future, since it was moved from the text of the agreement to the Political Declaration, which is not binding.

What creates a major obstacle to Brexit is the current state of the British constitutional system of government, the expert said. “The opposition has deprived the government of the majority, thereby stripping it of the opportunity to rule the country or adopt new laws,” - Kramarenko said. Johnson’s achievement is precisely due to the fact that despite the opposition, he was able to cope with the opponents and postpone the date of Britain’s exit from the EU. “Now there is a significant degree of confidence that Brexit will take place and, perhaps, it will come as a gift for the New Year,” - Kramarenko said.