The future of Orthodox shrine in Gifhorn (Germany) 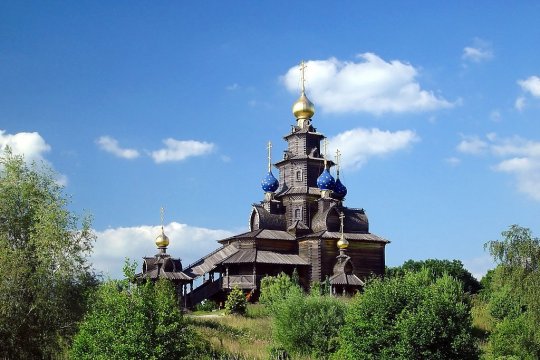 St.Nicholas’ Orthodox Church in Gifhorn (Germany) – a copy of the ‘gem’ of the Russian wooden architecture of the 18th century – has for a long time heard none of the divine liturgy chants or the ringing of the bells after the service. The  reason for this is the decision by a private sponsor, who at the end of the 20th century granted the financial resources and the territory to rebuild this magnificent church, to sell it to the Russian Orthodox community for a hefty sum. What caused the problem is the breathtaking beauty of the architectural marvel.

It was the beauty of the wooden Transfiguration Church, created by Russian architects in 1756, that encouraged German entrepreneur and ethnography lover Horst Wrobel to replicate it in Germany. The copy in question was built in 1995 in Lower Saxony, near the town of Gifhorn in Wrobel’s private estate where he set up a museum of old mills on the riverbank. The beautiful church fits in perfectly well with the picturesque landscape. Its original, the above-mentioned Transfiguration Church, which used to be located in one of the villages of the Vladimir Region (about 200 km from Moscow), burned down seemingly beyond repair in a fire caused by a strike of lightning in the 19th century. In the 20th century it was rebuilt on the  basis of the original designs, but this time, on the territory of the wooden architecture museum in Suzdal.

It was in Suzdal that Horst Wrobel saw the breathtaking beauty and exquisite elegance of the Orthodox shrine. With the help of old drafts he had a copy of the church built in his estate and dedicated it to St.Nicholas the Miracle Worker. In autumn 1995 His Holiness Patriarch Alexey II, while on a visit to Germany, paid a visit to Horst’s museum of mills and the church on the territory of the museum. In a solemn ceremony the Wrobel family presented His Holiness Patriarch Alexey II with St.Nicholas’ Church. According to Father Superior Archpriest Gennady (Budko), the gift certificate was not of legal but of symbolic nature:

The symbolic document of 24.11.1995 points out that «50 years after the end of the Second World War this church serves as a bridge across our nations, from person to person, and from heart to heart. Let this House of God become a symbol of reconciliation for all German and Russian Christians for ever». Having consecrated the church Patriarch Alexey II addressed those present: «The church’s beauty is reminiscent of a cathedral. I would be happy to take the church to Russia, but it stays here as a fifth church of the Russian Orthodox Diocese in Berlin and Germany. A visit to Gifhorn crowns my visit to Germany».

According to Father Gennady, in 25 years that the church has been in Lower Saxony the owner of the building has signaled no intention to legalize the gift to the Russian Orthodox Church. In 25 years the church has seen six superiors, has formed a community of 120 people, and requires appropriate maintenance and renovation. Given the conditions imposed by the owner the parishioners have to hold services on the rented premises of a Catholic church or on the premises of other Christian organizations. Why? – Entry to the museum is not free, for parishioners it costs 30 euros a year. The superior together with parishioners have to leave the church right after service for absence of life-support facilities – water supply, kitchen, recreational area (benches – tables). But this is not the main thing that worries the church community led by Father Gennady. «Our parish consists of missionaries and wanderers, - Father Gennady says. – If the new owners come, the road to the church will become inaccessible, for the museum is skirted by a trench with water and a bridge which is lifted most of the day. This is the only way to the church. The incumbent owner is set on selling the church». This is the price the fifth church of the Russian Orthodox Diocese pays for its beauty, once inspired by God. A poet says,

«…what is beauty and why is it worshipped by people?
– Is it a vessel with a vacuum,
or is it a fire twinkling in the vessel»?

St.Nicholas’ Church with its spectacular beauty and impressive history is waiting for prayers and chants to the glory of God, glimmering icon-lamps. Put on stake is money and faith. Either the church will be bought (at best by the Russian Orthodox Church), or the prayer will work a miracle and the church will be gratuitously handed over to the Russian Orthodox Diocese in Germany. The parishioners believe in a miracle and continue to pray about the future of the church.