The Ghost of Goebbels: Historical Revisionism and World War II 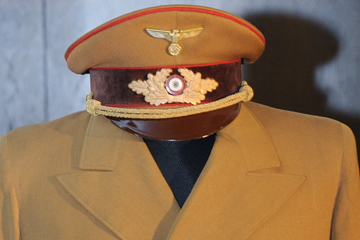 An expected outgrowth of the world's steady descent into total and extreme capitalist control is the increasing tendency by some historians and their accomplices in the media to re-invent certain aspects of history.

Although the history of the Middle East and colonialism have been favorite playgrounds for the historical revisionists, it is World War II and the role played by the Soviet Union in the war that has attracted the attention of most of the alterers of history, both professional and amateur.As we recall the Nazi attack on the Soviet Union on June 22, 1941, the 70th anniversary of which we now remember, it is important to note that the "revisionism" of the events of that day began with chief Nazi German propagandist Joseph Goebbels and the disappearance of historical facts "down the memory hole," as George Orwell put it in 1984, is carried on to this day by Goebbels's ideological heirs who are mainly funded by the barons of Wall Street through various tax-free right-wing "think tanks" and research institutes in the West.

Although the revisionists claim that the 1939 Ribbentrop-Molotov Pact and its secret protocol to divide eastern Europe into respective German and Soviet spheres of influence somehow made Soviet leader Joseph Stalin a "partner" of Hitler, little attention is paid to secret German-British talks in 1939 that would have divided the world into German and British spheres of influence while making common cause against the Soviet Union.

Goebbels's ideological heirs would have everyone believe that Stalin and German Fuhrer Adolf Hitler were on the same ideological plane and were conniving to jointly conquer the world. This revisionist account is meant to mask the goals of the Western industrialists at the time. Many of the world's wealthiest capitalists, including the German-descent British royal family, wanted Hitler to stamp out Soviet Communism and had no problem with the Nazis' "long march East."

The pandering of British Prime Minister Neville Chamberlain to Hitler at the 1939 Munich Conference, which saw the dismemberment of Czechoslovakia, was seen in the eyes of many British and American industrial barons as the remnants of Czechoslovakia being safe from Soviet Russia. That same mind-set would exist as Nazi troops invaded Poland, the Baltic states, Yugoslavia, and then, the USSR, itself. Not until December 7, 1941, and the Japanese attack on Pearl Harbor, would the western industrial barons decide it was time to support the war effort against the Axix Powers, albeit reluctantly.

Certainly, Britain was not alone in its secret campaign to align with the Nazis against the Soviet Union. U.S. President Franklin Roosevelt, who enraged many capitalists and Republicans by establishing diplomatic relations with the USSR after he took office in 1933, found himself almost ousted in a coup d'etat in 1933 arranged by Wall Street robber barons intent on declaring a state of national emergency and placing Roosevelt under virtual house arrest. The plot was discovered by retired Marine Corps Major General Smedley Butler and communicated to the U.S. Congress where details of the plot remained secret until 1970. Among the chief coup plotters was Prescott Bush, the father and grandfather, respectively, of two later U.S. presidents. Prescott Bush was a chief Wall Street banker for German Nazi-owned businesses in the years leading up to and following the outbreak of World War II.

In 1936, U.S. ambassador to Berlin, William Dodd, wrote to Roosevelt to warn him that the threat posed to him in 1934 by the Wall Street-Nazi alliance remained as such two years later. Dodd wrote:

"A clique of U.S. industrialists is hell-bent to bring a fascist state to supplant our democratic government and is working closely with the fascist regime in Germany and Italy. I have had plenty of opportunity in my post in Berlin to witness how close some of our American ruling families are to the Nazi regime . . . A prominent executive of one of the largest corporations, told me point blank that he would be ready to take definite action to bring fascism into America if President Roosevelt continued his progressive policies. Certain American industrialists had a great deal to do with bringing fascist regimes into being in both Germany and Italy. They extended aid to help Fascism occupy the seat of power, and they are helping to keep it there. Propagandists for fascist groups try to dismiss the fascist scare."

The words of Dodd: "propagandists for fascist groups try to dismiss the fascist scare" ring true today. Wall Street of the 1930s and 1940s owned the major media outlets, including the large publishing houses, that gave notoriety to the revisionist commentators and historians of their day. The situation remains much the same today.

There is the distinct danger that soon, the historical revionists will not be content in putting Stalin and Hitler on the same level. With global media in the hands of a select few capitalists, it is forseeable that Stalin will be re-assessed as the reason Hitler had to conquer most of Europe and Hitler will be painted favorably. There are already signs that this historical revisionism is taking place among the right-wing political parties of Europe that are adopting many of the planks of the neo-Nazi movement, including the meme that Hitler had no choice to invade eastern Europe and the Soviet Union to protect the world against Bolshevism. That argument of the capitalists is nothing new but it is one, 70 years after the invasion of the USSR by the Nazis, that should have long ago been discarded into the ash bin of fascist propaganda.

We, the assembled representatives of historical research communities and civil societies of Belarus, Latvia, Moldova, Russia and Ukraine participating in the Sevastopol International History Conference commemorating 70th Anniversary of the outbreak of 1941-1945 Great Patriotic War, regard the War and our Victory as one of the most tragic and at the same time heroic pages in the common history of our nations.

We are increasingly alarmed with the current rise of revisionism of the history of World War II in the West and in several post-Soviet republics where incendiary political considerations outweigh commitment to historical accuracy.

We consider it absolutely unacceptable to draw the Great Patriotic War against fascism as a ‘fight of two totalitarian regimes’, to deny the justified and liberating nature of that war for our nations, to depict the Red Army’s liberation mission in 11 European countries as ‘Soviet occupation’.

We state that the concept ascribing ‘mutual responsibility’ for unleashing the war to ‘the Nazi and Soviet regimes’ lacks any historical and moral foundations. As historians, we are aware that the responsibility for that devastating war rests fully with the Western powers. Until now the diplomatic archives in London keep guarding the secrets of the British-German talks held in June 1939 on the division of the world into Great Britain’s and Germany’s spheres of influence, aimed to deter Soviet Union from taking part in shaping the future of Europe.

While Hitler’s military machine was destined to exterminate Soviet Union as a ‘hotbed of Bolshevism’, today the Nazism is sometimes being portrayed as a ‘natural response to the red threat’. This is an utmost lie contradicting recognized historical facts.

We claim that all civilized nations should officially outlaw any endeavors to justify fascism, Nazi criminals or collaborationists. Any revisions of the Nuremberg Tribunal outright statements condemning fascism are totally inadmissible.

The present round of revisionism is supposed to provide an ideological backing for “anti-totalitarian” appeals like the notorious OSCE Parliamentary Assembly resolution adopted on July 3, 2009calling for a trial over the Soviet Union’s allegedly ‘criminal past’. Such campaigns, provoking territorial claims against Russia and compensation demands for ‘damages caused during Soviet occupation’ trigger imminent and far-reaching dangerous consequences for the European security, still not adequately assessed by the short-sighted instigators of these campaigns and their blind contractors.

A distorted view on the meaning and the results of World War II and Russia’s Great Patriotic War would pave the way for a new division of Europe and the world with catastrophic consequences. This is why we are calling upon the academic community for a fair and unbiased research of the period of 1941-1945 in the name of historical truth and our common future. The sacrifices of millions of Russians in the defeat of Fascism and the devastation wrought in the war must not be perverted for current political narratives. Such actions only serve to cause division within Europe, and prevent the advancement of peace and unity amongst peoples.