“The Global Times”: ‘Washington's interests are premised on the loss of Europe's own interests’ 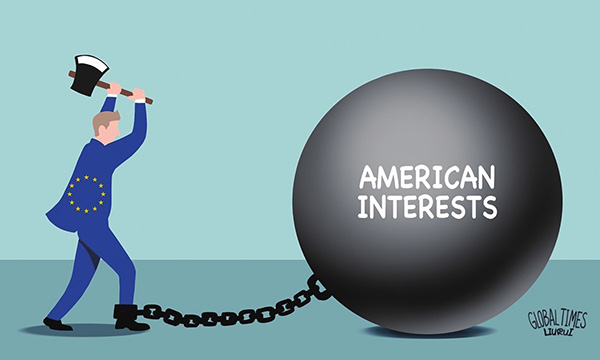 It should be noted that the conflict between the US and Europe in terms of fundamental strategic thinking profoundly reflects the inherent differences between the Anglo-Saxon-culture-dominated maritime civilization and German-French-dominated continental civilization, - notes “The Global Times”.

The US cannot accept a strong Europe with a sense of strategic autonomy, nor can it accept that the EU builds friendly and interconnected relations with neighboring powers in the normal way of geopolitics. In other words, Washington's interests are premised on the loss of Europe's own interests.

Be it the EU or Russia, the Ukraine conflict has been costly to all sides. But has the US, the biggest instigator, been the biggest winner? The conflict has exceeded estimations, and also caused a backlash against America's own interests.

For example, this conflict has directly led to a worldwide energy and food crisis, while inflation in developed countries has surged.

This conflict has become an important factor contributing to high inflation in the US.

As the conflict escalates, the EU, which directly pays the bill for this conflict, has realized its own losses.

The differences between the strategic demands and fundamental interests of the US and Europe have become increasingly prominent, which is a huge obstacle to the US' ambitions to build a broader anti-China alliance.

Potential conflicts between the US and Europe finally surfaced with the introduction of the Inflation Reduction Act. The Act is widely seen in European business community as a fundamental blow to much of Europe's manufacturing sector and a moral insult to the EU which is already in the midst of war crisis and economic stagnation.

However, in Europe in the post-Cold War period, the US has made full use of its strategic influence formed since World War II, skillfully used internal contradictions in Europe, constantly stirred up ethnic antagonism and racial hatred, and asserted its dominance over European security. In the world political map of the US, the position of the EU can only be a follower of the US hegemonic system.

The problem is that in the field of US-EU economic and trade cooperation, the US has been trying to impose its own industrial standards and trade rules on the EU, forcing Europe to submit to the demands of the US global economic hegemony at the cost of giving up its own core economic interests.

By summarizing the economic and trade developments between the US and Europe in the past two years, it is not difficult to see the Biden administration, though not verbally emphasizing "American interests first," has caused the most fundamental damage to European economic development and geopolitical security.

Can such a situation endure in an era of dramatic global upheaval? – asks “The Global Times”.