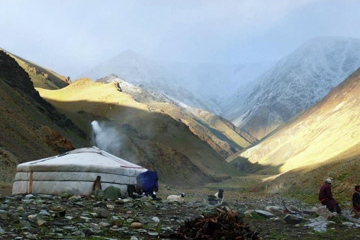 Today Mongolia is attractive to foreign investors in many sectors of the economy, the most dynamic of which are tourism and the development of mining for gold and other precious metals, and the center of attention for this is the Gobi Desert.

There is a place in the Mongolian Gobi desert called the Turquoise Hill. It gets its name from the rich copper deposits that give it its distinctive greenish color. It has long been known to have these copper deposits, along with quantities of gold and silver, but was considered too small to be worth mining commercially. Then around a decade ago a team of geologists was sent to the area to conduct new investigations. What they discovered was astonishing. The Turquoise Hill turned out to be the tiny visible tip of one enormous iceberg. The Gobi desert is sitting on top of the largest deposits of copper, gold and silver on planet earth, not to mention coal, uranium and rare earth deposits, and the world’s largest mining companies are falling over themselves to exploit them. Among them is the mining giant Rio-Tinto, which has reportedly already invested $7 billion in its project, in which the Mongolian government holds a 34% stake. The project hopes to produce $8 billion a year for at least the next 40 years. The potential benefits to a country of less than 2.8 million people are enormous. It has already led to Mongolia becoming one of the fastest growing economies in the world.

However, there is a darker side to the Great Mongolian Gold rush. They are known as “Ninja” miners, and there are estimated to be over 100,000 of them. The nickname comes from their habit of walking to work with large plastic basins for gold panning tied on their backs, making them look like the characters from the TV series “Teenage Mutant Ninja Turtles.”  They contribute a significant amount to the wealth of the country, so despite their actions being unregulated and illegal, the authorities tend to ignore them. The work is manual and backbreaking. They dig a hole in the desert, just large enough for a man to work in. In the winter they have to light fires to melt the permafrost before they can even start to dig. Then once they dig down far enough to hit the layer of alluvial deposits, they branch out and pull the gold bearing soil up to the surface. The soil is then panned for any gold that may be in it. On a good day they can earn $5, not a lot, but much more than they could earn herding flocks of yaks or sheep. (I have seen this method of mining at first hand in West Africa, where they mainly dig for diamonds. On no account would I go down one of these pits.) The sides of the pits are not supported in any way and cave-ins are common. It is a very dangerous and often lethal occupation. Also large swathes of grassland are being destroyed, rivers diverted or dried up entirely, and dangerous chemicals used in extracting the gold are polluting the land. Much of Mongolia’s heritage is being ripped away in pursuit of precious metal.

Even the “Ninjas” are becoming an endangered species. As more and more licenses to mine are being “bought“by large mining companies, the areas they can work in are shrinking. When they are gone, how will they feed themselves? After all, they no longer have their traditional way of life to fall back on. You would hope that the enormous sums of money being generated will be distributed evenly and fairly throughout the population, and that ordinary Mongolians will benefit from their country’s unexpected windfall. Sadly, so far this isn’t happening. It shows every sign of going the same way as Nigeria. In the early 1990’s I worked for some time in the economic capital of Nigeria, Lagos. At the time it was the sixth largest oil producer in the world, but never anywhere else have I seen such extremes of poverty and wealth. Somewhere at home I have a photo of small children rummaging through a garbage dump for scraps of food, while in the background the high rise offices of the international banks on Victoria Island can be seen, known locally as launderettes because of the alleged money laundering that they did. Despite all the oil, I used to see queues of cars outside petrol stations empty of fuel, sometimes many hundreds of meters long. We had to buy our fuel at inflated prices on the black market or do without. Greed and corruption destroyed the dream of a new prosperous Nigeria, with social justice for all.

But I do not draw an analogy or try to compare the lives of the people in the two countries. New Presidential elections have just been held in Mongolia. The incumbent President, Tsakhiagiin Elbegdorj, won a second term. He has promised to do everything in his power to improve economic and social life in the country. Mr. Elbegdorj is positively tuned for foreign investors. The former journalist who led the “Peaceful Revolution” which ended communist rule in the 1990’s, began the fight against corruption and made the active promotion of foreign investment his priorities during his first term. In 2012, the Mongolian economy grew by 12%, mainly due to the influx of foreign investment in the mining sector. But so far the majority of the country’s 2.8 million people still live below the poverty line. I am an optimistic person by nature. I truly hope that they all win the lottery.